It seems that there’s a new type of comedy these days and they’re intended for a more mature audience. Granted, some of the better comedies out there are intended for a more mature audience, but movies like “Role Models” are (and should be) compared with the likes of “The 40 Year-Old Virgin” and “Superbad”. Comedies that are counter-culture, use four letter words in conversation with children and have drinking, sex and drugs aren’t bound to appeal to everyone. In fact, it’s probably a fairly small audience that these movies do appeal to. That must be why I like them so much. With “Role Models” we get two great actors in Seann William Scott and Paul Rudd. I have to admit that Scott has made quite a name for himself when he could have just been another face in the “American Pie” cast. And Paul Rudd has emerged from the mid 90’s movies like “Clueless” to a fairly second half to his career. Put them together and you’ve got “Role Models”.

Rudd plays Danny Donahue, a representative for the Minotaur energy drink company. He and his partner Wheeler (Sean William Scott) spend their days traveling around to middle and high schools preaching to kids to stay off drugs and instead drink Minotaur. After a surprise party celebrating a decade of employment by Minotaur, Danny has a meltdown and decides to propose to his girlfriend, Beth (Elizabeth Banks) only to find that she’s dumped him because she can’t take his negative attitude anymore. In a fit of rage, Danny and Wheeler manage to deface school property among other things and end up facing jail time or serving 150 hours of community service. The two end up at “Sturdy Wings”, a “Boy’s Club” of sorts founded by ex-drug addict Gayle Sweeny (Jane Lynch). Naturally the two are paired up with some odd children; Ronnie (Bobb’e J. Thompson) a foul-mouthed kid who’s obsessed with breasts. And then there’s Augie (Christopher Mintz-Plasse or “McLovin” from ?Superbad’), a geek who’s obsessed with role-playing and fantasy games. Will Danny and Wheeler bond with their kids and all will be well or will they end up serving jail time?

Admittedly, “Role Models” is very predictable from the get go. That’s fine, because even though you know what’ll happen getting there is the fun. The chemistry between Seann William Scott and Paul Rudd is undeniable and I felt bad for laughing so hard at things that probably shouldn’t be laughed at. Still, the movie is written in a way that appeals to immature folks like me so I got over it pretty quickly. Of note, I have to say that Jane Lynch steals the show and does make the most of her supporting part. She’s a great improvisational actress and I find it really hard to believe that most of her lines were actually written in the script. If you’re a fan of movies like “Knocked Up”, “Superbad” or “The 40 Year-Old Virgin” then I have to say that “Role Models” is right up your alley.

“Role Models” is shot in a 1.85:1 VC-1 HD transfer that looks pretty good. As with most big budget studio movies, we can expect the image to look glossy and exhibit all the traits that we’ve come to expect out of a movie of this caliber. Thankfully the image doesn’t disappoint and while not the best example of a HD picture out there, it’s far from the worst. Colors are bold and bright and detail is amazing. Seann William Scott’s character always wears a five o’clock shadow during the film and it’s pretty amazing when you can see the individual bits of stubble on his beard. Contrast is right on target as are black levels. Quite simply, this is above average and something we’d expect from a movie like this.

The DTS Master audio 5.1 track delivers on a few levels too, though this film isn’t exactly one that will have “dynamic audio” written all over it. Dialogue is very clean and clear and though the surrounds don’t come into play too much, there are some instances in which they make their presence known. There are a few moments in which the soundtrack kicks in for some added ambiance, but by and large this movie is limited to the front stage. No complaints here.

The movie comes to us in two versions, the Unrated and the Rated are both on the same disc. The Unrated version is three minutes longer and since I never saw the movie in theaters, I don’t know what was added (or left out if you’re talking about the theatrical version). Personally I always watch the Unrated version and know I’ve seen everything the filmmakers want us to see. We start off with a very informative commentary track by director David Wain. Though it’s a solo track, he’s very talkative with details about the shoot, the script and the overall experience of finding just the right actor for the right part. He’s also in some of the background scenes in the film, too. A majority of the deleted scenes should have been in the film or at least according to Wain and they’re included for us here as well as some outtakes. We’ve got the obligatory featurette “On the set of ?Role Models'” as well as “Game On: Creating a Role-Playing world” which focuses on the L.A.I.R.E. world seen in the movie. Evidently these things are real and pretty popular. Strange. We get some “In character” interviews which are pretty funny, though they’re all improvised and some BD-Live features allow you to see some exclusive content and create your own family crest and share it with other registered members. 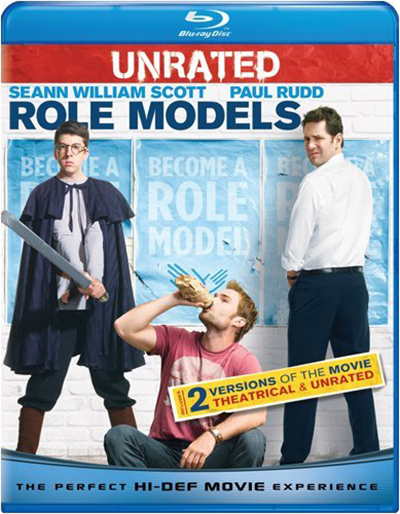