Love her or hate her (and there’s plenty on both sides) you have to admit that Angelina Jolie is a bona fide movie star. Yes, she’s the offspring of Jon Voight, but she made a rather immediate impression with her roles in “Gia” and won an Academy Award for “Girl, Interrupted.” However as well-known as she is, she might be best-recognized for “stealing” Brad Pitt away from Jennifer Aniston. Still, this is a review of the movie “Salt” and not a commentary on the personal life of Angelina Jolie. One thing I will say for her is that she gets into her roles. And while “Salt” might be a simple retelling of the “Bourne” series of movies (albeit with a female protagonist), it’s pretty impressive when you realize what all Jolie did for her part. She’d just had twins nine months earlier, though to see her in the opening scene – you’d never know it. Ok, ok…enough about Jolie, let’s get onto “Salt.”

Evelyn Salt (Angelina Jolie) works for a “petroleum” company. I put that in quotes because it’s really a facade and she’s a CIA agent. But when a former KGB agent shows up at CIA headquarters and exposes Salt as a “sleeper” agent, the chase it (literally) on. We learn that the children of the Cold War were taken away from their families and trained at a very young age to be spies for Russia. They’d wait years and sometimes even decades to live in America, get jobs and essentially be just like everyone else. However when the time was right, they were to strike. Guess what? The time is right. Salt manages to escape the CIA and even though her boss (Liev Schreiber) wants to believe she’s innocent, her actions say otherwise. Salt is to kill the Russian president and then await further orders. Can she do it or will justice prevail and they bring her into captivity?

As mentioned above, “Salt” very closely resembles the “Bourne” series of movies in that the main star is the one on the run from the various government agencies. Yes, Salt is trained to kill (and does), she can make a grenade launcher out of an office chair and some household cleaning products and even manages to look sexy doing so. Directory Phillip Noyce who has helmed a few other movies of the same genre (“Clear and Present Danger”, “Patriot Games” and “The Bone Collector” also with Jolie) and it’s clear he’s in his element once again. Yes, everything is far-fetched but it’s a movie so that’s what we expect. I, for one, enjoyed “Salt” and having no preconceived notions going into it is probably the best way to go. If you like Angelina Jolie (or, more the point, Angelina Jolie as a spy) then this and “Mr. and Mrs. Smith” are two movies that are required viewing – and maybe you could throw in “Wanted” as an after thought.

“Salt” is shown in a 2.40:1 AVC HD transfer that’s befitting of a new to Blu-ray film. Yes, this is your typical Hollywood blockbuster and as such, the flaws are few and far between. I noticed no artifacting, though some grain is apparent in some of the darker scenes. Then again the movie is somewhat gritty in tone, so it suits the theme of the film well. Flesh tones are a bit muted, but Jolie is in nearly every scene and her porcelain white skin seems to have a glow that’s unlike any other. Detail is on par with other Blu-ray movies in that we can see the most minute of details. The fast-moving chase scenes don’t suffer at all and if it’s a good-looking picture that you’re after – you’ve found it.

The DTS HD Master Audio soundtrack is amazingly robust as well. The LFE are heavily involved in a majority of scenes and they make their presence known early and often. There are plenty of gunshots, car chases and explosions to go around and the instrumental score only adds to the tension. Dialogue is deep and robust as well. The front stage takes the majority of the sound, but the surrounds are always there offering some support. Quite simply, this is a fantastic example of a great surround experience and I’d have to say that I was expecting no less.

The movie comes to Blu-ray with a variety of supplements starting out with no less than three versions of the movie. Granted, these aren’t all that different but we do get a Director’s Cut of the film as well as an extended unrated sequence and the theatrical version of the film. There’s only a few difference in minutes to these, but never let it be said that having options isn’t a bad thing. We get a commentary on all three versions of the film, but as you might guess, 99.9% of the track is the same and only differs during the extended parts. We get a slew of featurettes focusing on Angelina Jolie, the costume design and on the director Phillip Noyce. We get a picture-in-picture segment entitled “Spy Cam” as well as a radio interview with Noyce. The disc is also BD Live enabled and features Sony’s MovieIQ to boot. 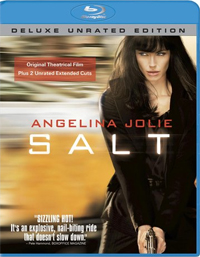