I’ll be the first to admit that Smallville’s final season doesn’t quite achieve the great heights promised by the better-than-it-had-any-right-to-be ninth season. There are a few squandered opportunities here and there that I feel would have felt more at home on this series a year or two ago, with precious screen time lost to several throwaway installments like “Shield” and (more egregiously) “Fortune”. The tenth year of the series just doesn’t seem to hold on to the continuous focus and flow of season nine, which had the advantage of staying more on-topic throughout its run than possibly any season had up to that point. Still, there is plenty for fans to sink their teeth into in this last go around, and Smallville fans know what to expect by and large. For every episode that isn’t as great as it could have been, there’s a “Homecoming”, “Beacon”, “Kent”, or “Finale” waiting to remind us why we’re watching. What we’re here for is a final thrust toward Clark’s destiny, and by that measure, Season 10 gives long-time devotees more iconic imagery, references to the comics, and moments we’ve all been waiting for than any single year yet. All the bases are covered here, from Clark’s transformation to bumbling reporter to finding the one fully-functioning phone booth left in Metropolis in which to change clothes, to finally becoming the world’s greatest superhero.

If Season 10 can be faulted, it’s for attempting to cram too much into its remaining episodes when several seem to be there only as filler. I knew going into this last year as a fan that there was still a lot of ground to cover with very little time left to indulge in side stories, character introductions, and rehashes of plotlines we’d seen done time and time again. The final season is guiltier of doing this a few too many times than I would have liked, but I still found the experience a worthwhile one overall. And if the canvas seems more crowded than it might have needed to be to send things off in the most satisfying narrative way possible, one can hardly fault the show’s writers for trying to touch on everything but the kitchen sink before the clock ran out on the series. Indeed, this season’s biggest weakness is, oddly, also its greatest strength. Every year that Smallville has aired since 2001 has employed a season-long theme of sorts, and Season 10’s ambition to reflect on what had come before, make it relevant to the present, and give us a glimpse of a gloriously iconic future is nothing if not commendable. I found the (largely and wisely) unexplained inclusion of John Schneider’s Jonathan Kent particularly moving, and an extremely fitting way to send Clark off to his ultimate destiny.

Sure, the character of Darkseid never really gets off the ground the way he probably should have given all the build-up early in the season, but then, this is Smallville, not Superman, and any fan’s personal ability to see and appreciate that fine distinction has always been directly related to their ability to enjoy this series for what it has always been: the story before the story. As such, one could hardly expect Clark to go up against one of Superman’s most formidable foes in a knock-down, drag-out spectacle of a conflict that would threaten to dwarf the battles that we all know are imminently ahead of those same characters in the comics. It just wouldn’t work. Season 10 leaves Smallville in a place that I think will resonate with fans for many, many years to come. Is it a perfect season? No, but I think accomplishing that after a decade of anticipation simply would have been an insurmountable task for all involved. But in the end, I think the final year gets more right than it gets wrong, and sends us all away with a great taste in our mouths for what we saw unfold over so many years. When I watched “Finale” air back in May, the final moments were emotional ones for me. I’ve grown up with this show, and matured as a person right along with most of these characters. For some, the series simply went on too long in postponing the inevitable. But if I can give Season 10 any single compliment, it’s that it did the one thing that most didn’t think possible: it left us all wanting more.

Well, it’s taken a decade, but Warner Bros. has finally seen fit to bring Smallville up to par on the technical front. Encoded for the first time in the AVC codec (all previous releases have been VC-1 affairs), Season 10 looks simply fantastic, easily beating out the standard definition release and even the HD broadcast versions I’d kept stored on my hard drive. Fans of the series will be thrilled with these presentations, as the show has never looked better at home than it does here. Fine details are intricately displayed in Season 10. A side-by-side comparison of the two encodes even gives this set a very slight edge over the already strong Season 9 blu-ray to my eyes (though not quite enough of a bump to garner a perfect video score). The occasional soft or overly-grainy shot crops up now and again, but nothing that really detracts from the overall experience. Smallville during its later seasons has developed an ever-greater reliance on a cinematic look, right down to the lighting choices and camera angles. Season 10 boasts the strongest transfers of any of the show’s blu-ray releases so far, with tremendous black levels that never crush detail, excellent compression that never falters into the blockiness of some of the worst moments in the Season 6 or 7 blu-rays, and a crispness that lends well to a three dimensional quality that simply wasn’t present on the series until this release. Best of all, the digital noise present in some of Smallville’s earlier high-def incarnations are finally eradicated this time out. These are excellent transfers which, though the series was shot with HD cameras at this stage, appear quite film-like with just the proper levels of grain and clarity. Kudos to Warner for a job very well done.

While the video transfers may be only a hair better than their Season 9 counterparts, the DTS Master Audio track on Season 10 is nothing short of a revelation. I’ve long derided the decision to saddle Smallville’s HD sets with lossy Dolby 5.1 tracks, and after hearing Season 10 in lossless, I must say, simply, that I rest my case. It’s amazing to me the difference that the inclusion of a lossless track has made here. Again, this advantage sets this package well ahead of the standard def offering and the HD broadcasts. But what’s more, Smallville, it turns out, is a sonic marvel! I’d even go so far as to say that if one were to close their eyes, they’d be hard-pressed to discern these audio mixes from a big-budget modern Hollywood movie. Ambience is everywhere, and the surround channels are constantly engaged. Your subwoofer will get a tremendous workout when the action on-screen calls for it and dialog is always clear and completely intelligible. Benefiting most from the transition to lossless, though, is Louis Febre’s glorious, iconic score. Every note comes through with utter transparency. While I’m sure that those who don’t have the emotional investment in this series that I do may not understand just how big of a deal it is to hear these scores presented in such a way, to my ears the result is a deeply sublime experience. The power during the action sequences is appropriately robust and impactful, but in truth, it’s the quiet moments that impress most. Case in point: I watched a few moments of “Kent”, in which Clark tells Jonathan that he’s his hero before being ripped away from him back to our universe. The full-bodied nature of the audio mix immediately wrapped me up in the scene, and I found myself tearing up within a few seconds. These audio tracks are proof positive that sound is half of the experience, and fans will be ecstatic with what the studio has done here. Thank you, Warner, for wisely bestowing tracks like this on a show that so obviously could have benefited from such treatment from the very beginning.

Smallville: The Complete Tenth Season comes with a small if moderately satisfying platter of extra features in tow. First up are two featurettes. The first is “Back in the Jacket: A Smallville Homecoming”, which goes into the inspirations behind filming the show’s excellent 200th episode. The second is “The Son Becomes the Father”, and it examines the impact of the father / son relationship on Clark and Lex’s development and how those developments cause their paths to diverge. Between the two featurettes, I actually preferred the latter, though neither one really delves as deeply as I would have hoped into their respective subjects. Technically, these are listed as documentaries, but at around 20 minutes each, I have a hard time counting them as more than featurettes. Also here are two commentaries, one for “Lazarus” with writer/producers Holly Henderson and Don Whitehead and actors Allison Mack and Cassidy Freeman, and one for “Dominion” with executive producers Brian Peterson and Kelly Souders, actor/episode director Justin Hartley and actor Callum Blue. I was more than a bit surprised to see that “Finale” wasn’t included as one of the two “key” episode commentaries. I would have loved to hear what the creative team and cast had to say about their last moments on the series â€“ especially given that there is a commentary on the original “Pilot” episode on DVD. Oh, well. Longtime fans of this series know what they’re getting into with a so-called “deleted scenes” section. This is anemic even by the standards of the puff-piece blu-ray extra. Running at a paltry four minutes, these scenes really don’t add up to a whole lot in the grand scheme of things. What’s more, we hardcore fans out here know that there are a ton of extra and deleted sequences that don’t wind up in sections like this, making its barely-scratch-the-surface nature all the more disheartening. We know there’s a wealth of untapped material on the cutting room floor for a show that lasted for ten years, so why not show us a bit more than four minutes of it? Rounding out the extras is a music video for Swank’s “How Do We Do” which, from the perspective of one of the two men behind The Definitive Smallville Soundtrack web site, is probably the music nadir of the entire decade-long run of the show. All in all, I would have liked to see a bit more included here, most notably the excellent series retrospective that was included with The Complete Series set in full HD, but fans of the show are here for the episodes themselves, and on that level, this set definitely does not disappoint.
[message_box type=”note” icon=”yes”]A full review of the entire Smallville series can be found here[/message_box] 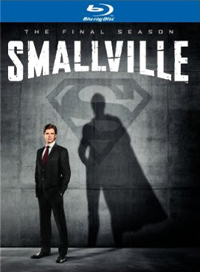