It’s hard to argue that M. Night Shyamalan’s films have impacted pop culture. And no doubt 1999’s The Sixth Sense has made its mark as well. It was selected as one of the American Film Institute’s Top 100 films of all-time in their latest poll and made a household name (at the time) for young Haley Joel Osment. The movie was nominated for Best Picture and put the filmmaker on the map. Over the next few years, he dazzled us with such films like Signs, Unbreakable and The Village, but it seemed that the momentum ran out. After a few bad films, Shyamalan wasn’t the name he was before. But with 2015’s The Visit and the television show Wayward Pines, it restored some of his creditability. Add to that the commercial success of Split (it made nearly $300 million worldwide on a $10 million budget) and we’re bound to see more of Shyamalan and his films.

We meet Kevin (James McAvoy), a man with D.I.D. (Dissocative Identity Disorder), a mental illness that manifests itself from trauma that creates multiple personalities. In this case, he has twenty-three of them and there may or may not be another one forming. One of them, “Dennis” manages to kidnap three teenage girls: Casey (Anya Taylor-Joy), Claire (Haley Lu Richardson), and Marcia (Jessica Sula). He locks them up in a basement where the girls try in vein to escape. Casey, the most daring of the trio, tries to connect with one of the personalities, though the other two girls are summarily punished and sequestered in their own rooms. This is juxtaposed with “Kevin” meeting with his psychiatrist, Dr. Fletcher (Betty Buckley), as she tries to ascertain the mental health of her star patient.

As with most of Shyamalan’s films, there’s a twist and I certainly won’t give it away. This really is McAvoy’s show and though some feel he was overacting, I find it’s probably difficult to portray 23 different personalities (though we actually only “see” about 7 of them). I think Edward Norton did it best in 1996’s Primal Fear. It really is a two person show with Anya Taylor-Joy dueling with McAvoy’s personas and Joy seems to have the chops to stand toe to toe with him. Of note, or maybe not, there’s an odd backstory to Joy’s character involving her uncle. This only seems to serve the purpose that a teenage girl knows how to fire a shotgun effectively. I wasn’t really clear on that aspect of the film. But I digress. Split isn’t Shyamalan’s best film, but it does show us that he’s not lost his touch.

The vast majority of the film takes place indoors, with only the first scene being outside. That said, this lends itself to a very “industrial” look and feel to the film. The wooden walls, some of the pipes and such of a building all have a very unique look. There isn’t a lot of color in the movie as is the case with most of Shyamalan’s films. Detail is accurate, each of McAvoy’s “characters” seems to have a different look to them despite his physical appearance hardly ever changing. Contrast is strong and despite the dark scenes, the image wasn’t challenged in the least. The 2.40:1 AVC HD image doesn’t disappoint, for sure.

A DTS HD Master Audio soundtrack has a few moments to shine, but the majority of the film is dialogue-driven. Granted, the dialogue is mainly by McAvoy’s character and each one of his personas seems to have a different way of speaking (a fashion designer, a nine year-old boy, etc.). While some ambient surrounds persist, the front stage shoulders the majority of the track and does a fine job with it. A few of the more action-oriented segments engage the LFE, but by and large this is a good, but rather unimpressive-sounding mix.

Split restored some of my faith in filmmaker M. Night Shyamalan. I, like others, had kind of fallen off the bandwagon in recent years and it’s unlikely that he’ll ever recapture his former glory of the late 90’s/00’s. Still, while some might argue that McAvoy was just hamming it up, others have praised his abilities. Whichever side you’re on, Split is certainly worth checking out. Universal’s Blu-ray both looks and sounds the part and has enough supplements to warrant a purchase. 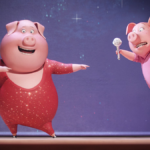 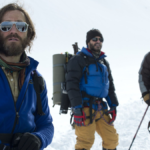