I feel that so long as television and movies exist, so too will Star Trek in one form or another.  Regardless if you’re a Trekkie or not, I think it’d be hard to admit that Gene Roddenberry’s creation hasn’t impacted pretty much everyone on the planet.  Yes, the original series only lasted three seasons and it was about as corny as television came, but it did pave the way and even impacted directors and writers for future projects.  The original crew then had more success with the feature-length films, the first starting in the mid 70’s and they made their last appearance in 1994’s Generations, which linked some of the original crew to that of Star Trek: The Next Generation.  Flash forward fifteen more years and we’ve got the same story, but an all new (and much more attractive) crew.  Purists might argue there was no need to do this, but in order to introduce the Enterprise to a new generation, this series “reboot” was a necessary step.  That and it’s all the rage in Hollywood.  Everything old is new again, right?

You know the names, but not really how they came to be on the Enterprise.  James Kirk (Chris Pine) is a reckless youth with no real direction, but his father, Capt. Christopher Pike (Bruce Greenwood) sees that there’s potential in young James and encourages him to enroll in Starfleet Academy.  We then meet the remainder of the cast and crew with Spock (Zachary Quinto), Dr. “Bones” McCoy (Karl Urban) and Lt. Uhura (Zoe Saldana).  After some initial tension between Spock and Kirk, we see the true nature of the movie and the mission – defeat the Romulans.  A man named Nero (Eric Bana) has threatened the Enterprise and Starfleet in general.  We all know what must happen and this is where Star Trek excels, at warp speed I might add!

When you’re messing with a Star Trek movie, you’d better know what you’re doing and J.J. Abrams is one of the few that really does.  He’s carefully crafted a taut, engaging movie with a story that we’ve all known existed for the better part of 45 years.  There’s a lot to be said for that.  This new, more youthful cast, has had a lot to live up to, but I think each and every one of them pulled it off.  Yes, we know the story, we know about what happens to the guys in the red suits and we know that there’ll always be tension between Spock and Kirk.  If anything is logical, it’s that those two won’t always see eye to eye.  However like Batman, Spider-Man and Superman so too has Star Trek been rebooted and it’s a change for the better.

It’s hard to imagine a science fiction film not looking good in HD or Ultra HD as the case may be. And when you consider that this is a Star Trek film, the stakes are upped that much more. This is the first foray into the Ultra HD/4K territory for Paramount (who is no doubt releasing these to promote the new Star Trek: Beyond film), but that’s ok. I’d just watched the Blu-ray of this not too long ago so popping the 4K version into my player was something I’ve been looking forward to. The film, now 7 years old as of this writing, looks fresh and new and has in no way suffered. The additional resolution doesn’t necessarily help the movie, and the additional color via HDR only adds to it. Let’s not forget that though the movie takes place in the depths of space, the Trek films have always been very colorful. There’s really nothing to nitpick here, everything looks as it should and this new 4K disc does look a bit better than the Blu-ray version, though like most all other 4K films – it’s nothing that’s jaw-droopingly amazing. Colors are bold and brash, detail is nearly off the charts and it has that sheen to it that really makes it stand out. It’s a testament to technology and how amazingly good most films look these days.

Probably the thing that struck me more was the improved Dolby Atmos soundtrack. I’ve been saying for a while now that my setup isn’t capable of this, but I finally bit the bullet and purchased one (they’re actually quite affordable). This is the first film I’ve “experienced” Dolby Atmos in and let me tell you – it’s actually quite a difference. That’s not to say that the included Dolby TrueHD (found on the Blu-ray) isn’t noteworthy, but the Atmos track just seems to take it up a notch or two. I felt that there are more little tidbits of information here and there and it seems like you’re enveloped in the sound mix a bit more (no doubt why they chose to call it “Atmos”). The warp engines of the Enterprise, the phasers and the chase/battle scenes are all highlights in this very robust and dynamic track.

The remainder of the supplements are located on the third disc in the set which is identical to that of the two disc offering for the film.

I’m usually not a fan of reboots, but this is an example of one that’s been done right. This does bring the crew of the original Enterprise into a new generation and it’s worth its weight in gold. This new Ultra HD/4K edition does improve on the video and audio quality of the original Blu-ray set but sadly does not offer any new supplemental material. If you’re looking to build a 4K library – this is a good place to start. 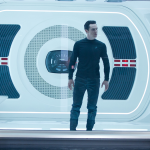 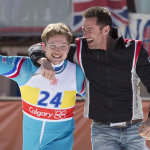