The only good bug is a dead bug.

As graduation approaches, students have to decide in which direction to take their future, to the world of normal work, or toward becoming a citizen. Of course, you can only become a citizen if you serve in the military and since the war with the bugs rages on, that often means risking life and limb in the process. Johnny Rico (Casper Van Dien) was a sports hero, came from a wealthy family, and was a poor student, but when he learned his girlfriend Carmen (Denise Richards) was enlisting, he decided to do the same. Against the wishes of his parents, Rico signs up and is assigned to join the infantry, which means he will be among the first to storm the bug strongholds, the most dangerous division of all. As he trains to take on the enemy, he forms friendships with several fellow troopers, including former classmate Dizzy (Dina Meyer). After he runs into Carmen and discovers she is now close with someone else, Rico forms a bond with Dizzy and soon, he is forced out on the battlefield. Can Rico manage to survive the horrors of the war against the bugs and more to the point, can humanity overcome and send the bugs back into the ground?

Although it strays wildly from Robert A. Heinlein’s excellent novel, Starship Troopers is a sharp, clever, and visually dynamic motion picture. It is humorous to see some reviewers act as if they’re the only ones to notice the propaganda angle, as I think it is obvious from second one here, unless you’re deceased or just very dim. As director Paul Verhoeven likes to lay themes under his main elements, you’d expect Starship Troopers to be that way, but I think he plays his cards in plain view, leaving it up to the audience how they wanted to classify the movie. It is an obvious satire of propaganda materials and also a wild, often outlandish action picture, either way, this stacks up well and is a terrific movie. The cast is well chosen, mostly beautiful creatures with wooden talents, like Casper Van Dien and Denise Richards. This kind of material needs that wooden acting, at least in some of the roles, like the two I mentioned. The visuals are tremendous here also, while the special effects and battle sequences flat out rock, no two ways about it.  I give this film a high recommendation and if you’re going to pick up Starship Troopers, this is the only version you’ll want to own.

I know a lot of film snobs dislike his movies (especially the ones since he joined the Hollywood system), but I have to admit, I hold Paul Verhoeven as one of my favorite directors, with no doubt in the least involved. I think this is because he makes movies that seem like trash on the surface, but then have layers underneath, which means audiences need to pick up on them, or else miss part of the point of the picture. This is not so much the case in Starship Troopers since it is all rather obvious, but Verhoeven often does use that approach. In this film, he piles on the cartoonish violence, with bug fights, huge gun battles, and all that fun stuff, but it just doesn’t hit that hard, as I mentioned, it seems more cartoonish. This is in keeping with the tone of the film, which plays like an old John Wayne flick in some ways, violent, but not offensive. Other films directed by Verhoeven include Basic Instinct, Soldier of Orange, Robocop, Total Recall, Hollow Man, and Showgirls. The cast includes Casper Van Dien (The Omega Code, Modern Vampires), Denise Richards (Wild Things, Valentine), and Dina Meyer (Johnny Mnemonic, Dragonheart).

Starship Troopers was once one of the most highly-regarded titles on DVD mainly because of its look on the format. I remember this, along with The Fifth Element looked so glorious that I’m sure it helped DVD finally snuff out LaserDisc back in the early days of the DVD format. Times change and we’re now greeted with a 4K version of this movie and let me be among the first to say; it doesn’t disappoint. Everything about the transfer that was good looks even better in high definition. The special effects even seem to be a little smoother, we see Denise Richards’ dimples in all their glory and, of course, plenty of blood and guts for some added measure. This 1.85:1 HEVC transfer exemplifies what watching films in HD is all about and though I did catch a few spots where there was a bit of softness, they were few and far between. Fans of Starship Troopers will no doubt be in awe of the way this looks.

The Dolby TrueHD soundtrack from the Blu-ray (also included) has been replaced by a new Dolby Atmos mix. I can remember watching the movie with the Superbit edition and being blown away and this new uncompressed mix ups the ante just a bit more. Sounds are truly robust and are so real that I literally turned my head a few times to make sure it was coming from the movie. Dialogue, as we might expect, sounds very ample and rich as well. This is a true dynamic mix, with no real stage dominating here, the ambiance is truly (pardon the pun) everywhere and it’s hard to imagine how this could sound much more realistic.

Nowadays everything is political, but two decades ago that wasn’t necessarily the case. Love it or hate it, Starship Troopers has withstood the test of time. This was a prime candidate for the 4K treatment and while it’s disappointing that no new features were added, we do get all of the ones from the previously-released Blu-ray. This is a must have for any 4K collection. 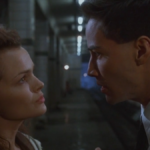 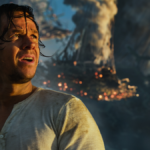