“Swingers” showed up right in the middle of the 90’s, a decade known for the prominence of Independent filmmaking. While the story and message are both universal, this movie brought about it in a whole different way. At the time, Vince Vaughn and Jon Faverau weren’t “Moviestars” in any way shape or form. They met on the set of Rudy where both played parts. In fact, Faverau evidently lost a lot of weight, because it wasn’t until a few years later that I realized he was the same guy! Swingers can be credited with many things, among them the return of swing music (which may now only be starting to subside) and the term “money”. You can’t miss it, as it’s featured prominently throughout the film. But in a nutshell, it’s about relationships and finding your dreams (in this case it’s a bunch of aspiring actors who move out to Hollywood to try and make it big).

Mike (Jon Faverau) has been out in California for some six months now. He’s a comedian, but not very funny to others, and has left his girlfriend of six years behind him in New York. She’s now with someone else and it’s tearing him up inside. Mike’s career isn’t taking off like he thought it would, and on top of all that he’s not letting his social life get past the fact that his true love isn’t with him anymore. His best friend, Trent (Vince Vaughn), is the typical California party boy. He’s loud, annoying and somehow manages to still get women. He’s Mike’s anthesis…and his best friend. While trying to cheer Mike up, they go to Las Vegas and try to have some fun, but eventually wind up back in L.A. doing the same old thing. The trouble is that to Trent, life’s just one big party and to Mike, life is trying to find the right woman to spend time with. Throughout the whole ordeal, Mike confesses in his friend Rob (Ron Livingston–the “Office Space” guy) who has also moved out to sunny California on the premise that he’ll make it big someday.

Don’t let the cover art fool you, Swingers is about how men and women deal and relate with one another. Hell, they actually have some pretty good advice in there! Though they party, get drunk and get in fights, no one ever actually has sex. And that’s the thing, with a title called “Swingers” you might expect some more; but it’s just not there. This is a love it or hate it film, and I fall in the first category (a friend of mine recommended it to me when it showed up on home video, saying that I reminded him of Trent because of all the bad things I did to women…)! The music is good, and maybe if you’re in a Frank Sinatra kind of mood, then it’ll rub you the right way. The thing is that it’s a really original movie, no Hollywood special effects and no predictable plots. It’s about life, based on Faverau’s own, and you can learn a thing or two if you really try. Highly recommended.

“Swingers” has never looked that great on any home video format, be it LaserDisc, DVD and now Blu-ray. That’s ok, though, as it’s the epitome of a low-budget, independent movie so it’s not supposed to look glossy and sheik. The 1.78:1 AVC HD image stays true to its roots and though there’s some grain evident in most every scene, I’ve become so used to it that I hardly noticed. One scene that’s always plagued me is when Jon Faverau’s character enters his apartment and all we see is his silhouette in the doorway. The DVD had so much noise going on in the negative space that it was nearly impossible to watch. That’s been rectified with this Blu-ray release, though there is still a bit of artifacting. Despite that, black levels to seem a bit improved and though flesh tones are a bit all over the place, it’s still a lot more consistent than I remember with the other offerings. “Swingers” won’t ever look like “Iron Man”, but this is the best the movie has ever looked; so that’s good.

Like the video presentation, “Swingers” doesn’t sport the most robust audio track. Yes, we do have a new DTS HD Master Audio 5.1 mix, but it’s about the same as the previous mix and, truthfully, sounds just a tad better than the included 2.0 surround mix. By and large this film is dialogue-driven with just a scant amount of “surround” effects thrown in for good measure. One thing that the movie is known for is the jazzy, oh ok I’ll say it…”swinging” soundtrack. The movie was actually responsible for bringing back swing music, albeit for a brief time. This mix is nothing to write home about, but it’s not too bad either.

As is the case with every Miramax release via Lionsgate, the same supplements from the DVD have been ported over to this Blu-ray. We start off with two audio commentaries. First up is the pretty straight-forward commentary by Director Doug Liman and Editor Stephen Mirrione. They talk of the production, getting the movie made and financed and how it was to shoot on such a small budget and such. Much more entertaining is the “Illustrated Action Commentary” where Vince Vaughn and Jon Faverau are given a white pen (think “Monday Night Football”) to write on the actual movie while it’s being played. It’s a cool feature and they make good use of it. Faverau, being the writer, has a lot to say about the film and Vaughn is entertaining as well. These two make a good team! A documentary is up next, though it’s divided up into four different parts. The first is “Art Imitates Life: Writing the Story” which obviously tells of how Swingers came about and how it was influenced through the events in Jon Faverau’s life. Next is “Life Creates Art: Getting Swingers Made” this tells of how they got the money, found the director and got all the right elements together to actually get the movie set up and produced. “Life Imitates Art : Swingers Culture” tells about the cultural phenomenon the movie was and how it almost single handedly brought back “swing” music. Interviews with the cast and crew comment on it as well. Lastly, we have “Art Creates Life: Life after Swingers” this is pretty self-explanatory. The interviews show how surprised the actors were when it became such a hit on home video (Faverau admits “…when it arrived on home video, I became a star”). All in all this is a good look at the entire process of the film being made and its impact upon society. Next up is a fictional trailer for a movie called “Swing Blade”. At the time, there was mucho Oscar buzz surrounding Billy Bob Thornton’s Sling Blade and this is a hysterical look at the combination of that movie and Swingers. None of the actors are the “real deal”, but it’s a pretty funny concept seeing Karl from Sling Blade dressed up and telling the women that he likes “French Fried Taters…” 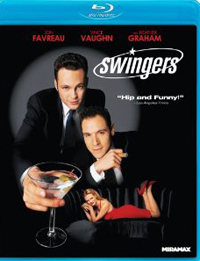