The Seventies were an amazing era for film. Scorsese, Coppola, Spielberg, Cassavetes, and De Palma were all out making masterpieces at the same time as seasoned masters like Kubrick and Truffaut. At the same time, people were going to drive-in movies to catch cheap low-brow entertainment to make them laugh and turn them on. These films were not known for having great acting, plots, or music. They were typically just something fun to watch while smoking a joint or making out with somebody in your car full of empty beer cans. One low-brow movie that fit the bill was Jack Hill’s The Swinging Cheerleaders.

The plot of the film revolves around a group of cheerleaders and their newest recruit, Katie. Katie is really a journalism major that plans on doing an exposė on the exploitation of women on the cheerleading team. Katie has a boyfriend that is your typical scumbag dope fiend hippie. Katie meets Buck, the quarterback, who is dating another cheerleader. As Katie and a buck become closer she begins to realize that the football team is being rigged to only cover the spread by the coach and some backers. Meanwhile, everybody is losing their virginity, sleeping with their teachers, doing drugs, partying, and hooking up.

This movie is actually pretty entertaining. I am not sure if I would recommend it, necessarily, because it is not by any means good. It is exactly how you might expect. If you are into the old grind house movies that ran at drive-ins, this is definitely a lot more coherent, entertaining, and funny than most of the shock schlock that came out in that decade. One of my favorite aspects was Jack Hill’s reliance on stock footage for all of the football scenes which look totally different from the actors in the stadium. It cracked me up every time. Also, the ending is a lot of fun.

At the end of the day, this film is still garbage, so replay value will be in the eye of the beholder. I would highly recommend a rental before a purchase. If nothing I said about the film sounded like your style, you will probably want to avoid this one.

Arrow Video did a pretty solid job on the transfer of the film using an MPEG 4 AVC codec of a new 2K restoration. The transfer is not going to blow you away simply because the original elements are not extremely visually appealing. It seemed like Arrow had done their due diligence but the film has that soft focus Seventies quality to it that some will find off-putting. For my purposes, I was pleased with the transfer’s look that stayed true to the source.

The audio treatment of The Swinging Cheerleaders is pretty dang good. Being a LPCM 1.0 track, it can be expected that range is severely limited. The good thing about this track is the wonderful job they have done on leveling the sound. I do not need to adjust the volume very often at all. Voices were very clear and the track has been cleaned of any audible hisses or pops. This is a near perfect job as far as a pure transfer goes.

The Swinging Cheerleaders is a fun and sleazy romp that manages to stay consistently entertaining, which was a big issue amongst other films that were made specifically for drive-ins. I couldn’t help but enjoy watching it while knowing that it was pure cotton candy flavored garbage that would absolutely rot my mind. Arrow have provided a solid transfer and a bevy of supplemental features. Fans will want to pick up a copy quickly. In my opinion, the replay value of this title is pretty limited, so you may want to rent before a purchase. If this type of film is not your deal, don’t expect this one to change your outlook. 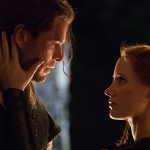 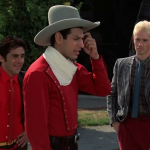