Fifty? Wow. Really? Disney animation has put out fifty full-length films since they first started with “Snow White and the Seven Dwarfs” back in 1937. And when you think about what it takes to make a movie, let alone an animated movie, that’s pretty impressive. Granted, most of the traditional 2D animation has gone the way of the dodo and with their latest effort, “Tangled”, it’s no exception. The computer-generated movie is the new art form and while a different beast than its 2D predecessor, there might actually be more work involved in creating the movies. Still, that’s a technical discussion and one I’m not the authority on (pardon the reference). The central theme of all of Disney’s films is their entertainment. Will it keep your kids occupied? Will it make you laugh? Cry? Moreover, will it be a disc you pop in the player over and over or will it become a coaster? Let’s find out what’s so appealing about “Tangled.”

Rapunzel (voiced by Mandy Moore) is the only daughter of the king and queen. However she’s kidnapped at an early age as her hair has the power to grant her new mother (voiced by Donna Murhpy) eternal youth. As a result, Rapunzel has lived in utter seclusion for nearly eighteen years, though she longs to venture outside her castle and explore the world. Conversely Flynn Rider (voiced by TV’s “Chuck” Zachary Levi) is a thief who’s just broken into the castle and has stolen the crown fit for the princess. He’s pulled one over on his literal partners-in-crime and accidentally finds Rapunzel’s abode. The two leave and head out to explore the world though Flynn has ulterior motives. Together they must avoid Rapunzel’s mother, the royal guards pursuing them, Maximus (the world’s funniest horse) and an army of thugs. Can they do it?

I’m sure I didn’t do the film justice with my synopsis of the plot, but there’s actually a lot going on in “Tangled.” I found it both entertaining and endearing at the same time with just the right mix of action and comedy to keep an adult entertained. Yes, it is a Disney film (with a “PG” rating to boot) so there are a few questionable things entwined, but overall it’s something that the entire family will enjoy. Though this isn’t a “Pixar” film per se, John Lasseter is the producer of the film and as you may or may not know, he’s the man behind the Pixar line of films. “Tangled” is a new twist on a classic fairy tale and it shows that with good writing, some talented voices and the right mix of everything else – there’s no reason why a classic story can’t have new life breathed into it.

Oh come on now, do we really need to sit here and say how good this looks on our HDTV’s? Well in case you need written proof, “Tangled” in its 1.78:1 AVC HD transfer, looks positively stunning. As we might expect for an animated film done entirely in the digital realm, the picture looks so lifelike that you’d think you could jump in there with the characters (you can’t, of course). The little things make this so absolutely stunning, like the texture of Rapunzel’s hair, the little nuances here and there that really stand out. Compare this with “Snow White” and you’ll see how far they’ve come in 75 years. This is another shining example of how absolutely amazing Blu-ray can look. Enough said.

While not quite as impressive as the video transfer, the DTS HD Master Audio soundtrack does sound pretty good. The majority of the film is dialogue intertwined with several songs (it’s a musical), all of which positively resonate through the 7.1 channels. There are a few action scenes that sound pretty good as they bring the surrounds into play. Admittedly I’ve heard some of the Pixar movies sound a bit better and maybe it was the genre of this film that didn’t quite lend itself to being such a strong soundtrack, but while it sounds good – it’s certainly far from unsatisfactory. Undoubtedly the target audience for this film won’t notice much and “Tangled” does have a fairly robust soundtrack, which works just fine.

This is it. The creme de la creme of the “Tangled” movies. If you’ve purchased this then you’re getting a four disc set that includes the 3D Blu-ray, the 2D Blu-ray, the DVD and a digital copy of the film. Let it be said you can now watch “Tangled” on pretty much anything in your possession that has a screen. We start off with some deleted scenes and they do have some introductions by directors Nathan Greno and Byron Howard, which helps set the scene if you will. We also get two alternate openings that are more of a “classic” approach. These aren’t the final product and I do have to say that I enjoyed the one in the actual film much more. As I mentioned earlier, this is the 50th animated film by Disney and they do a montage of sorts counting from their early works like “Snow White”, “Bambi” and “Fantasia” up to their newer releases like “Bolt” and of course the film in question. We get two extended songs: “When Will My Life Begin” and “Mother Knows Best” and we again get some introductions by the directors. “Untangled: The Making of a Fairy Tale” hosted by Zachary Levi and Mandy Moore as they guide us through the history of the movie and what it took to bring the film to its contemporary version. Lastly we get some “Tangled Teasers” brought to you by Disney’s Marketing department, no doubt. A second disc has been included with a digital copy of the movie that doubles as a standard DVD.

This Blu-ray 3D edition of “Tangled” is a bit different from its 2D counterpart. First off, you need both a 3D Blu-ray player and HDTV to make this happen and if you’re not equipped, well then save your money. This 3D version of the movie is, by and large, pretty similar to the 2D version but there are certain sequences that really take advantage of the 3D technology. The lantern scene at the end is perhaps the most beautiful of them all, really immersing you into tht 3D atmosphere. There are some other scenes that stand out as well, during Rapunzel’s musical number, her hair seems to leap right out at you and there’s a few with Maximus the horse as well. I’m sure the kids will get a kick out of the technology, but you’re not really missing anything by springing for the 3D version as opposed to sticking with the 2D. And don’t get me started on those glasses. 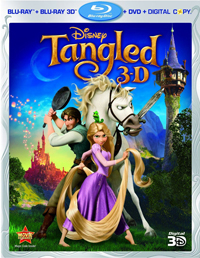