The world has been ravaged by the various global wars, leaving our world in 2039 a burned out husk. In the aftermath, it is not governments who oversee our lives, but corporations. These corporations govern over the eight sections of the world, the most powerful of them being Tekken. Tekken is not a kind ruler either, instead using fear to keep the population under control, including a tournament that pits citizens against each other in lethal combat. The tournament has an open slot this time, a spot which Jin (Jon Foo) manages to secure. He has a personal interest in the event, as he plans to use the tournament to take down Tekken, as revenge for his mother’s death. But Heihachi (Cary-Hiroyuki Tagawa) is a ruthless leader and he will not allow Tekken to be toppled without one hell of a fight. As he progresses through the tournament, starts to win over the locals, and even finds romance, can Jin somehow overcome the incredible odds against him?

While other popular fighting games have been turned into movies, none have had the incoherent, insane source mythology found in Tekken. To expect anyone to be able to make sense of the game’s plot is harsh, but to ask someone to write a script based on it, that is just plain cruel. As much as I like the Tekken series, anyone who expected this movie to make sense or be good is totally out of their mind. But we do get to see some of the franchise’s signature characters, which is quite fun. While some fan favorites are absent and Paul Phoenix is only talked about, seeing Eddie Gordo, Heihachi, Yoshimitsu, and others was cool. I wasn’t pleased with how Marshall Law was changed, but that’s Hollywood for you. Tekken is too restrained, it should have embraced the chaos of the game, with wild fights, rampant violence, and colorful dialogue. The film even has an R rating, but does nothing to push the violence beyond PG-13 standards.

I can understand the push to make a rational script out of the game’s nonsense also, but this ends up hurting the film’s entertainment value as well. Chances are if someone chooses to watch Tekken, they want to see brutal fights first and foremost, story be damned. So fans wind up disappointed with how tame the plot is, while those unfamiliar with the game are probably going to find it slow for an action movie. The fight scenes are decent, but few scenes really stand out. The sequences that are good though, really deliver and its a shame not all of them hit that same mark. The performances are about what you’d expect, good enough for the script, but not remarkable. As someone who was into the game and looked forward to the movie, I was let down, but there was still enough good stuff to keep my attention. I think Tekken will appeal most to fans of the game, who will be willing to overlook the flaws to pick up all the little references and see the characters brought to life. But if there is a Tekken 2, let’s hope the filmmakers put their foot on the gas and deliver the chaotic experience fans deserve.

Tekken is presented in 2.35:1 widescreen. This transfer is quite good, but doesn’t quite deliver the kind of depth and polish the best high definition treatments showcase. I found detail to be strong, not eye popping, but more than solid. The colors look terrific also, with vivid hues that never wane. No complaints with contrast either, as black levels look great throughout. I just wish the visuals showed a little more pop, but the movie still looks good.

A DTS HD 5.1 soundtrack is on deck and this one sounds quite good. The surrounds are active, especially during the action driven scenes. I wouldn’t call the mix explosive, but there is good presence and when power is needed, it is there. I suppose I just wanted that extra kick to put the mix over the top, which didn’t happen. Even so, this is a good sounding treatment that handles the film’s needs well. The music sounds good as well, while dialogue is clear and never distorted or drowned out. This release also includes English and Spanish subtitles.

In addition to a DVD version of the movie and a digital copy as well, you can watch a special look at the film’s stunt work. As this runs over fifty minutes, it is a better than expected look behind the scenes. 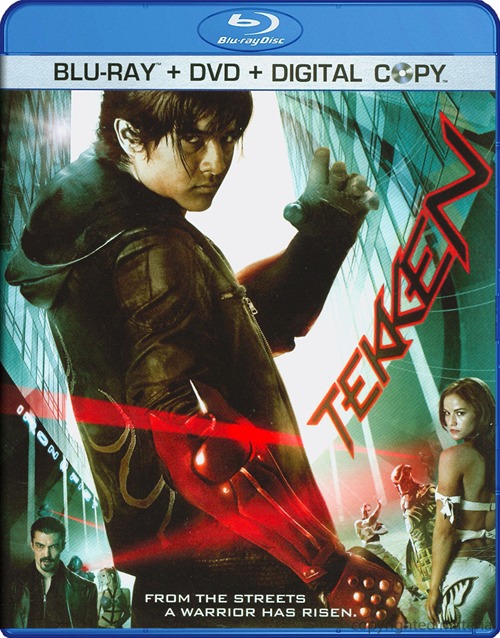