Has it really been nearly two decades since I first saw â€œThe Cutting Edgeâ€ in theaters? Well after a quick eye roll and a count on my fingers, it turns out that yes it has. Wow. Time flies. â€œThe Cutting Edgeâ€ is atop many people’s guilty pleasure list and I’m proud to say that I’m one of those that, for whatever reason, love this movie. Back when the movie came out, in March of 1992, I was really into hockey and considering that I lived in Arkansas, I was what you’d call a diamond in the rough. So any movie that had anything to do with hockey I was there (I believe â€œThe Mighty Ducksâ€ came out later that year). The plot is about as â€œbeen there, done thatâ€ as they get, but there was no denying the chemistry between actors D.B. Sweeney and Moira Kelly â€“ they made it work. And how about a pre-â€œLostâ€ Terry O’Quinn? Maybe it was the timing involved as the movie was set around the Olympics and at that particular point in time, there were to be two winter Olympics in four years. Whatever the cause or reason, â€œThe Cutting Edgeâ€ was made and I loved it.

Looking at the plot, it’s not that hard to figure out. We’ve got USA golden boy of hockey, Doug Dorsey (D.B. Sweeney) whose being romanced by every NHL team on the map. Doug takes a check to the Plexiglas and ends up losing 20% of his peripheral vision. As the doctor explains it, he’s got a blind side â€“ not good if you’re a hockey player. Doug ends up back in Minnesota doing construction before he’s recruited by Anton Pamchenko (Roy Dotrice). Anton makes a bold offer to Doug in that he’s going to train to be a partner with Kate Mosley (Moira Kelly), someone who puts the â€œitchâ€ in â€œbitch.â€ The two clash, yet somehow they make it work. They spend the next year or so training for the Olympics and have a realistic shot at the gold. Their hatred for one another soon turns into something else, though. Will Kate and Doug win the gold or kill each other first?

The movie clearly plays off the old â€œopposites attractâ€ mode and it works just fine here. As I mentioned earlier, both D.B. Sweeney and Moira Kelly have the on screen chemistry that made their respective parts not only work, but memorable as well. Looking back nearly two decades later, yes the movie is a bit dated (especially the soundtrack) but the heart of the story is still there. Add to this that it features some of the best choreography (by Olympic champion Robin Cousins) and you’ve got something. I won’t ruin the ending for anyone who hasn’t seen the film, but odds are if you’re reading this review then you either love the movie as much as I do or you’re curious about it. There were countless movies that had the same theme before this and there have been countless since it, but I think that â€œThe Cutting Edgeâ€ really hit the nail on the head. The film actually inspired two sequels, neither of which featured D.B. Sweeney or Moira Kelly, but that alone should say how good the original was.

I’ve seen â€œThe Cutting Edgeâ€ on pretty much every format available, from its initial release on VHS to LaserDisc to DVD and now we’ve finally got this on Blu-ray. Admittedly I was hoping for the best but expecting the worst. MGM has presented this film in its original 1.85:1 AVC HD transfer that looks, wellâ€¦like a movie that’s twenty years old. The main problem with the look of the film is the amount of grain associated with it. Several scenes look downright gritty. Now don’t let this deter you as it’s the best that the movie has ever looked, but that’s not saying a whole lot. Is it unwatchable? By all means it is, it’s just that we’ve become so spoiled by how good some of these movies look that when one comes along (like this) that doesn’t blow us away â€“ it’s a bit disappointing. Still, it’s nice to have this on Blu-ray.

The soundtrack has been re-mastered with a new DTS HD Master Audio mix and the result is, well, somewhat the same. The DVD didn’t have the most robust soundtrack either. Dialogue takes front and center here, though I will say that this film epitomizes the â€œearly 90’sâ€ soundtrack with plenty of synthesizers and whatnot. I didn’t have nearly the time with the audio that I did the video and while an improvement, this is a far cry from what a DTS Master Audio soundtrack is truly capable of.

There’s a bit of a black cloud surrounding this release and, as of this writing, the Blu-ray is only available at Target stores. This wasn’t a big deal for me as I went down to my local Target and picked up a (the last) copy. In regards to supplements, we get the original theatrical trailer as well as a ten minute featurette with Moira Kelly and D.B. Sweeney (this is circa 2006, so they’ve aged another five years) as they reflect back on the film, its significance and how it affected their careers. It’s nice, but how I’d love to have a commentary track. 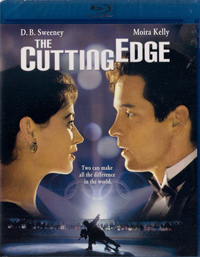