The summer of 1993 was a good year for Hollywood. Steven Spielberg and his dinosaurs raked in the cash, Tommy Lee Jones was chasing Harrison Ford all around Chicago in “The Fugutive” and Arnold Schwarzenegger proved that he could make a really, really bad movie with “Last Action Hero.” There was, of course, a little movie by the name of the “The Firm” which was the first of what was to be many adaptations of John Grisham’s novels. Cruise had just come off the highly-popular “A Few Good Men”, co-star Jeanne Tripplehorn herself coming off “Basic Instinct” and Gene Hackman had just picked up his second Academy Award for “Unforgiven.” Anticipation was high for this movie and it delivered on both a commercial and critical basis. The movie raked in over 150 million at the box office (good by even today’s standards) and co-star Holly Hunter picked up an Academy Award nomination for Best Supporting Actress (she later lost to Anna Paquin for “The Piano.)

Mitch McDeere (Tom Cruise) is an idealistic young lawyer right out of Harvard Law. He’s been courted by every major firm from New York to Los Angeles, but a small firm by the name of Bendini, Lambert and Locke makes him an offer that he simply can’t refuse. The firm, however, is in Memphis – not exactly the most cosmopolitan city. He’s got a new car, new house, his student loan is paid off…life is good. But it’s not before long that he learns of some shady doings by his firm. Couple this that he’s being harassed by the FBI (Ed Harris) to be an informant. You see, Bendini, Lambert and Locke is in business with the Chicago mafia. Mitch’s dilemma is to keep his job, become an informant with the FBI and manage to not raise any eyebrows all the while keeping his wife (Jeanne Tripplehorn) happy. Life’s not exactly roses for Mitch. Can he pull it off?

“The Firm” was one of the best-selling novels of 1991 and as I stated, was the first of Grisham’s quartet of novels. This was followed by “The Pelican Brief”, “The Chamber” and “A Time to Kill”, all doing very well in the box office. I do remember a little blurb in Entertainment Weekly looking back on the summer films that “Arnold Schwarzenegger is fallible – Tom Cruise is not.” Of course, as history has shown, Arnold has become Governor of California and Tom Cruise has spiraled into a frenzy of Scientology (yet still manages to make some decent movies). Admittedly, I’m not the fan of this movie that I was 15 years ago, but after seeing it again I think it’s held up pretty well. Cruise is perfect as Mitch McDeere and the supporting cast only enhances the film.

This is the inaugural release for “The Firm” on Blu-ray and the movie does sport a re-mastered picture. It’s been a few years since I’ve watched the movie, but I did notice a clarity that I’d never really appreciated before. There’s still some grain in some of the stock scenes, but the film seemed to have a smoother look and feel to it as compared to the standard DVD. The 1.85:1 AVC HD transfer looks great with fine details being evident. Contrast is strong as well as black levels looking just fine. I know I say this often, but this is the best this movie has ever looked on a home video format. Fans of the film will be very pleased indeed.

Along with the re-mastered picture, we do get a Dolby TrueHD soundtrack that sounds pretty darn good. Dialogue is at the heart of the film, surrounds are used rather sparingly and the front stage takes the brunt of the mix. Dave Grusin’s jazzy score simply resonates throughout and is certainly one of the highlights of the movie. There’s not a lot to say here, while there are some sparse action sequences, most of the “action” is in the dialogue. There’s nothing too impressive here, but it sounds better than expected.

“The Firm” is a Best Buy exclusive and I have no idea why Paramount does this. Yes, it’s great to have this on Blu-ray, but to force people to go to Best Buy to get it is a bit odd. Also, I usually don’t comment on cover art, but this just looks terrible. Looking at the box, you’d think the movie was about angels or something. I’m much more in favor of the traditional artwork that was on the standard DVD cover. Still, it’s a nitpick and not really a big issue. The only supplements are a teaser trailer and the original theatrical trailer. Sadly, director Sydney Pollack has passed on so I guess we’ll never get that director’s commentary. 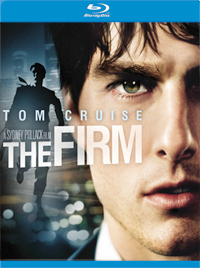