While he’s made some interesting choices, I’ve always been a fan of John Travolta. Sure, he’s made some duds here and there, and not all his performances are strong, there’s just something about interesting about watching a performance of his. I particularly enjoy him when he’s playing a villain. It’d be hard to another actor playing his role from Pulp Fiction. He was also super cool in Get Shorty and while it flew under the radar, I still enjoy From Paris with Love. In The Forger Travolta plays Raymond Cutter. He calls in a favor to get him out of prison 10 months early. We learn a bit later that it’s because his son, Will (Tye Sheridan) has cancer and he wants to spend the precious time with his son. Things aren’t looking bright for Will. The problem with Ray getting out of prison early is that by calling in the favor, he’s then asked to pull off a job. Ray is a forger and he’s forced to forge a painting by Monet and steal the original. It’s either this or go back to prison.

I admit that I knew next to nothing about this film prior to seeing it. I at least expected a bit more action and suspense than we get here. Surprisingly, a lot of time is devoted to Ray and his relationship with his father and his son. The heist itself plays more like an afterthought. I’m not sure if this was the best decision. There’s just not much that happens in the film that held my interest. I don’t mind a father and son angle, but I think the focus should’ve shifted to the actual forgery and not the ailing son. Christopher Plummer plays the father, and he gives a good performance, but there’s nothing especially interesting about any of the characters here. I think the film should’ve decided what it wanted to be and focused on that. Is it a film about a father’s release from prison and his redemption and relationship with his son or a heist film? The two elements simply don’t mesh very well. There’s also a minor subplot involving the FBI that adds little to the film. All of this in addition to the rather sluggish pacing make The Forger a worthy effort, but not something that should be bothered with. Travolta does a good job here, but the film did little for me.

The 2.40:1 AVC HD image is dark, gritty and looks just about as I thought it would.  Being a new to Blu-ray release, we can expect that the colors will look good, the detail amazing and just about everything in between will look good as well.  It all does.  Don’t get me wrong, Travolta isn’t getting any younger as is Christopher Plummer. The city of Boston isn’t really as detailed and showcased as I’d have thought it would be. Colors are a bit on the muted side, though detail is top notch.  A fine layer of grain is present too, but it works well with the film.  A nice looking transfer.

This isn’t the type of movie that would pack that much of a punch on the audio front, but there are a few scenes when the DTS HD Master Audio really takes control.  The majority of the film is dialogue driven and has a very low key tone to it.  The front stage shoulders the burden of the soundtrack, while the surrounds do their part to keep up the ambiance in the back.  The LFE chime in a few times as well, but by and large this mix isn’t anything that’s memorable, but it’s good and solid.

I wanted to like this film, and while I can’t say that I hated it, there’s just little here to recommend. It’s too slow to fully engage and can’t decide what kind of film it wants to be. Skip it. 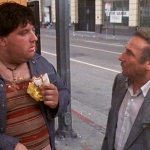 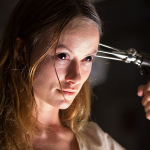