Blue Underground has recently circled back to some of their better-known releases and given them brand new 4K transfers. None of their filmmakers have been better served than Lucio Fulci. The last eighteen months has seen new restorations of Zombie, The New York Ripper, Two Evil Eyes, and now The House by the Cemetery. I became a fan of Lucio Fulci in just the last few years after watching both Don’t Torture a Duckling and Zombie. Now I try to check out every Fulci film that I can get my hands on. He is definitely an acquired taste. Almost all of his films were banned in their original form from being shown in the UK. Some of his films are a little too vile for me, but some walk a tightrope perfectly between gross-outs, suspense, surreal ideas, and beautiful cinematography. That is why his films are so interesting still to so many film lovers. This weekend I watched The House by the Cemetery for the first time. This is the third film in his Gates of Hell trilogy, but the first of those three films that I have seen.

The film begins inside a colonial style house. A young undressed woman waits for her lover Steve to return. When he returns he is mutilated. She is stabbed by an unseen assailant. Her body is dragged off to the cellar. In New York, young blonde child Bob has a vision that warns him to stay away from a house in a photo. In his mind, a young girl named Mae is telling him to stay away. Bob tells his parents, but they disregard his advice. When Bob’s father Dr. Norman Boyle (Paolo Malco) is offered the job of continuing Dr. Peterson’s research, he accepts the job. Dr. Peterson had gone crazy, killed his mistress, and committed suicide. He had been researching a Dr. Freudstein, an experimental doctor who lived in Boston in the Nineteenth century. Norman gathers Bob and his wife Lucy (Catriona MacColl) and they move into the house that Peterson had inhabited. It is not long before things begin to go catastrophically wrong. The cellar door is boarded up and their babysitter Anne (Ania Pieroni) is strange to list just a couple issues with the new house.

The House by the Cemetery is a solid horror film. Like other Lucio Fulci films, it is an acquired taste. If you cannot handle violence in films or gross imagery, Fulci’s films will not be up your alley. For myself, I enjoy every other aspect of Fulci’s films and that makes those other elements tolerable. He has a lot of great qualities in his films that can override those elements, but he uses the gross out scenes and violence to help build suspense. When you watch one of his films, you feel like you have been put through an ordeal. That is how skilled Lucio was at building suspense to almost unbearable levels. This film was no exception to the rule. The last thirty minutes of the film got my pulse racing.

There are numerous elements of the film that are enjoyable from a filmmaking perspective. Fulci’s use of strange camera angles, the strong sense of setting, the elements of the supernatural and surreal, and the great score by Walter Rizzati all contribute to a strong whole. Not everything is perfect. For example, the dubbing in English features one of the worst child voices of all time for Bob. It is noticeable and can almost pull you out of the film. The film also features a death scene that should have been shortened substantially. Some people complain about the ambiguity of Fulci’s films or they even take it a step further and say they don’t make sense. For myself, I don’t mind it with David Lynch’s films so why would I mind it with another director? If the film can hold my interest and deliver a unique experience I am typically satisfied. With The House by the Cemetery Fulci does exactly that. This is one of his more effective horror films and definitely earns a solid recommendation from me.

Blue Underground had released a 2K version of this film a few years ago on Blu-ray, but I did not purchase that release, so I will only be able to talk about the technical specs of their new 4K release. The new release looks fantastic. The 2.40:1 aspect ratio is wide, and the film has fine detail that fills the screen. There is a fine level of grain over the film. Like his work on Zombie, cinematographer Sergio Salvati shot the film using wide lenses and this allowed him to develop the setting of New England well. This new transfer looks great. Blue Underground have cleaned up the image without making it look soft. Fans should be very pleased

Blue Underground have provided DTS-HD MA Mono for both Italian and English and a DTS-HD MA 5.1 track in English. I watched the film in English with the surround track and thought that it sounded great. The 5.1 surround track really allows the great score from Walter Rizzati to shine. Keep in mind, that the English track does feature the awful dubbing of Bob! The Italian Mono track did not sound quite as clear as the English one to my ears, but still sounds adequate.

The House by the Cemetery is not as amazing as the great Zombie, but it is an incredibly suspenseful horror film with some amazing scenes. The final thirty minutes had my pulse racing. I love the score by Water Rizatti and the Lovecraft inspired setting. This ranks as one of Lucio Fulci’s better films in my opinion. The new 4K scan by Blue Underground is remarkable and the disks are full of supplements to keep you busy for hours. Many of the supplements are from the great Red Shirt Productions team, which is good news for film lovers. It is also great to have a CD containing the soundtrack as an added bonus. This stands as one of the better horror releases that we will see this year. 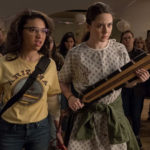 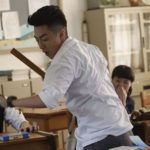