As with most every movie hit these days, there is always the inevitable follow-up. In the case of “The Naked Gun”, they waited three years to make theirs, but it’s still just as funny. Granted, there really is no substitute for the original, but part 2 takes right after it’s predecessor. Featuring almost the exact same cast as the first (except for Montalban, who as the villain, was killed in the ending of the original), the story is almost the same, but the jokes are much different (in content), but there’s still no reason not to laugh at this ever so funny and clever sequel.

It’s been three years since Jane (Priscilla Presley) and Frank Drebin (Leslie Nielsen) have met, but after their love affair in the first movie, they have gone their seperate ways. With the “Police Squad”, headed up by Drebin, now located in Washington D.C. Like the first movie, we learn of the plot and it’s rather simple as well. Jane’s new boyfriend, Quentin Hapsburg (Robert Goulet) is planning to destroy the environment in order for people to support his new nuclear power plant. Of course this will get Quentin very rich and all will be well…It’s up to Frank to stop him…at any cost. Frank, however, is having problems of his own. He sees Jane again and wants to get back together with her, and also finds out that Quentin is the one behind the environmental scheme. Trying to convince Jane of her new beau’s evil intentions is a subplot in this movie, though watching it is more of a joy than though-provoking. One scene that stands out as one that I forgot is when Jane and Frank are in their restaurant waiting for dinner. They ask the pianist to play “their song” and as he agrees, he suddenly starts belting out “Ding dong the witch is dead…”. Truly a great scene!

This movie was made in 1991, which gave it some more movies to spoof, but the whole series is mainly a spoof on itself, so the comedy remains intact. Also, O.J. Simpson, reprising his role as Nordberg, has a lot less to do with this role here, showing up in occasional scenes, but almost steals the show as he gets dragged from Washington D.C. to Detroit underneath a bus. As with the first movie, the creative team of Zucker and Abrahams are back and it’s pretty much a sure bet that if you liked the first installment, than this one has everything you’re looking for. A commentary track adds to the value of this disc.

It’s taken quite a while for the two Naked Gun sequels to appear on Blu-ray and I’d like to say it was worth the wait. But I don’t like to lie or mislead readers in my reviews. Unfortunately this is yet another Paramount catalog title that’s been handed over to Warner and has been churned out with absolutely no love. The 1.85:1 AVC HD image simply reeks of early 90’s cinematography, grain is abundant, the image a bit jittery and it’s just kind of a mess. Now, I will say, this is not unwatchable, but it’s a far cry from the crystal clear examples of near perfection that we’ve been accustomed to. I’m willing to bet that fans of the movies won’t mind too much, but still – these could have really benefitted from…anything done to them visually.

Also presented in a DTS HD Master Audio mix, this is a remastered version of the original Dolby Surround track. Sounding much better than the original, it’s obvious as the progression of these Naked Gun movies go, that we can tell that the sound is a constantly improving thing. Dialogue is clean and well-centered, and a few surround effects liven up the action sequences.

Nothing here. The previous DVD had some trailers and even a commentary track. Those seem to be eerily absent on this disc. That’s too bad.

Looking just a bit better than the DVD’s that came out in 2000, The Naked Gun 2 1/2: The Smell of Fear has finally hit Blu-ray. But with a less than average video presentation and average audio quality along with supplements which we all know exist and are absent – it’s a hard recommendation. 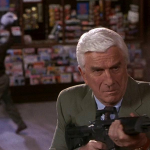 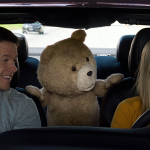