As I learned watching a few of the featurettes to this movie, Edgar Allen Poe was the first American author to actually write for a living.  That’s to say he wrote and actually got paid for it.  Now that’s fairly commonplace these days and with authors like J.K.Rowling and Stephenie Meyers becoming veritable billionaires, it’s strange to think that Poe was only paid $9 (yes, nine dollars) for “The Tell-Tale Heart.”  Never let it be said that authors don’t love copyright laws!  Anyone who remotely paid attention in High School English has undoubtedly heard of Edgar Allen Poe or at least one of his stories.  His most famous one is, obviously, “The Raven” but there are others like “The Pit and the Pendulum”, “The Masque of the Red Death” and “The Tell-Tale Heart.”  Poe also spent a lot of time in Baltimore and as a resident of nearby Annapolis, there is a lot of history of the man around.  Heck, the football team is called the Baltimore Ravens.  Coincidence?  I doubt it.  Nevertheless, this isn’t an English lesson, but for those who have heard of the man and have read his short stories, the concept of pitting Poe as a main character in this movie was rather intriguing.

Edgar Allen Poe has a few problems.  He’s broke and he’s an alcoholic.  He’s a writer who  has had a few successes, but he thinks more of himself than most others.  But after a rather unique murder has taken place in Baltimore, Poe’s services are required.  You see, the murder was done in a fashion as was described in one of his written works.  Poe, together with Detective Fields (Luke Evans), must try and track down the murderer before he strikes again.  But we all know he will strike again, don’t we?  In addition to his unemployment, Poe also writes at the Baltimore paper, the Patriot.  He’s a critic first and foremost and longs for Emily Hamilton (Alice Eve), a well-to-do socialite whose father (Brendan Gleeson) wants her as far away from Poe as humanly possible.  It just so happens that Emily is kidnapped as part of the murderer’s plan and Poe now has personal incentive to stop the rash of killings.  The question is, of course, will he do it in time?

As intrigued as I was by the plot of the film, the more I thought about it – it’s really nothing different than we’ve seen before.  It shares a common ground with films like The Silence of the Lambs or Se7en, in which the authorities are always one step behind the killer who seems to have everything planned out.  Admittedly putting Edgar Allen Poe as a central character in the film was a bit of a twist, and a good one at that.  I liken this to Abraham Lincoln: Vampire Hunter.  Obviously both are fake, but it’s interesting to see some historical figures battling crime or fighting off the undead.  And it’s also nice to see John Cusack take a different role. While in some films he’s picture perfect for (High Fidelity, Say Anything) and not so much in others (2012, Con Air).  Cusack embodied the role of Poe and I felt delivered a very strong performance.  Fans of Poe’s work will undoubtedly get more satisfaction out of the film than the average movie-goer, but The Raven packs a few twists and turns that should make for a good watch.

Presented in a 2.40:1 AVC HD image, The Raven is nearly as dark as they come.  The locations used to represent Baltimore were Budapest and Serbia and I don’t think I saw an inch of blue sky during the film.  Obviously there are many shades of red and black.  Contrast and black levels seem to be on the money, making for a very crisp and clean transfer but one with a lot of detail as well.  There’s a lot of bloodshed in this film, so it’s not for the weak of heart, so to speak.  I noticed no grain on the print and I wasn’t expecting to since it’s a new to Blu-ray film.  It delivers, as expected, and should make for a very pleasing viewing experience.

The DTS HD Master Audio soundtrack hits you in the opening scene and really doesn’t let go.  The score is rigid and tense with even some of the slightest sounds echoing in the rear surrounds.  Dialogue is very strong and natural as well, and while Cusack’s accent might fade in and out a bit, it’s by no fault of the audio.  The LFE are particularly engaging adding some extra emphasis from carriage wheels to bullets whizzing by.  This is a very robust soundtrack and one that certainly won’t disappoint.

There are just enough supplements on this movie to warrant a purchase and we start off with an audio commentary by director James McTeigue (best-known for V for Vendetta) and a few of his producers.  The track flows pretty well, with plenty of information about the shoot, the cast and the subject matter.  I don’t imagine ever listening to it again, but it’s a good compliment to the film.  There are some deleted and alternate scenes as well as a handful of featurettes that deal with “Bringing Death to Life”, “The Madness, Misery and Mystery of Edgar Allen Poe” and “Behind the Beauty and Horror.”  We also get a one on one with Cusack and McTeigue as well as a DVD and a Digital Copy of the film on a second disc.

Fox has provided us with an exclusive Interactive Map as well, check it out! 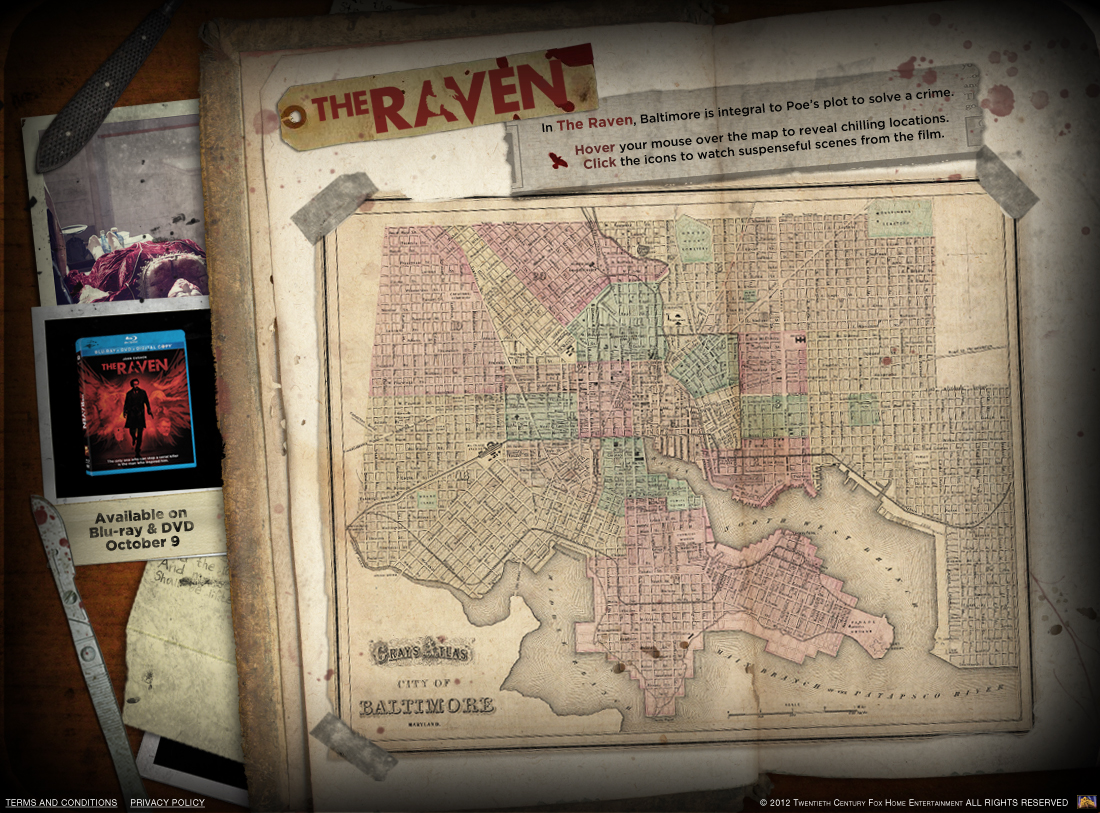