Lt. Andre Duvalier (Jack Nicholson) is a soldier in Napoleon’s French armed forces, but he finds himself alone, separated from his own regiment. He first wakes up on a remote beach, when he spies a interesting woman and decides to follow her, directly into the ocean. Duvalier soon wakes up yet again in an eerie, Gothic castle, whose owner Baron Von Leppe (Boris Karloff) is quite an unusual chap. This castle is home to a group of eccentric, perhaps even dangerous individuals, but Duvalier has no idea just how twisted the residents have become. The mysterious old woman and her oddly named hawk, the Baron’s rage and murderous past, and that’s just some of Duvalier’s concerns. Can he manage to escape this tower of horrors and return to his regiment, or will Duvalier be the next victim of the Baron’s malevolent home?

This movie has some potent talent involved, as Roger Corman unleashed Francis Ford Coppola, Jack Hill, Boris Karloff, and Jack Nicholson in order to bring this vision of terror to life. While not a classic in the traditional sense, The Terror is a great example of the kind of unpolished gem Corman could produce. The film’s creation was chaotic, with multiple directors, constant rewrites, and such, but it still manages to work. In a B movie sense of course, but The Terror is still a memorable picture. The atmosphere is quite good, as is the tension of the unknown, since you never know what kind of turn the tale will take next. Karloff is fun to watch as always, while the rest of the cast also makes the most of their roles, no matter how strange. Film Chest’s presentation gives us both Blu-ray and DVD versions and a light restoration on the visuals, which is enough to make this the definitive home video edition. So if you’re interested, this is the way to experience The Terror.

The Terror is presented in 1.77:1 widescreen. This is actually a damn good visual effort, thanks in part to the restoration work and color tuning done. The print looks good, with a lot less debris and other distractions than you’ll see on most versions. This really adds to the experience, since you’re not focusing on how awful the print is. The colors also look better than any version to date, with a much more natural spectrum than usual. There is some noise reduction and its obvious, but the trade-off for the enhanced print & colors makes it worthwhile.

As with Film Chest’s recent release Dementia 13, we’re given a Dolby Digital 5.1 soundtrack, but it does little to spice up the bland audio from the source. The surround use is never immersive, so it just kind of sounds hollow. The audio is never bad, as music is fine and dialogue is audible, but it also never shines. Not like we could ask for perfection in this case, however. This release also includes a Dolby 2.0 option, as well as Spanish subtitles.

In addition to both Blu-ray and DVD versions of the movie, we have a restoration demonstration and the film’s theatrical trailer. 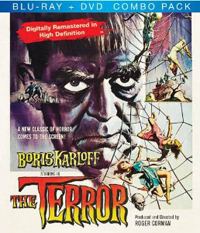