“In Italy for 30 years under the Borgias they had warfare, terror, murder, and bloodshed, but they produced Michelangelo, Leonardo da Vinci, and the Renaissance. In Switzerland they had brotherly love – they had 500 years of democracy and peace, and what did that produce? The cuckoo clock.”

[alert type=”danger” title=”Editor’s Note”]This title has been discontinued by Criterion (one of the few Blu-ray’s that’s no longer in print). Though this title is available, it runs upwards of $200. You can find a standard DVD of it with the same supplements and nearly as good image quality, however.
[/alert]

Holly Martins (Joseph Cotten) has just been offered a job by his longtime friend, Harry Lime (Orson Welles). Martins is an out of work writer of pulp fiction novels that not too many people have heard of. Even by his own admission, they’re not very good. Arriving in the occupied city of post-war Vienna, Holly is anxiously awaiting to see his friend. That is until he learns that just minutes before his arrival, Lime had been involved in a traffic accident (he had been hit by a car) and was moved to the side of the road where he then died. Needless to say, Martins is aghast at the news of his friend’s death and once the funeral is over, he starts doing some investigation to try and find out what it was that happened. After speaking to the local janitor (called a porter), who speaks in broken English and tells Martins that three men helped move Lime to the side of the street. He then meets up with Anna Schmidt (Alida Valli) who turns out to have been Lime’s love interest. An actress, her papers are forged and now with Harry out of the picture, she worries for her future in the town. But to Martins, none of this seems to add up and he continues his investigation.

As he digs deeper and deeper into the “case” sometimes with and sometimes without the local police help, he starts to come to the conclusion that maybe Harry was murdered as opposed to an accidental death. These being the case, the police still arent very motivated to cooperate as it turned out that Harry wasn’t that nice of a guy and was into some pretty heavy dealings. Now the first half (almost 2/3 of the movie, actually) doesn’t feature Welles at all, but we know that his head will eventually pop up as his face is on the cover of the movie. So I don’t feel that I’m giving anything away by saying that Welles does eventually show his face (and just that) as Harry Lime. We don’t know how he “survived” the accident, but by the time we see his face, we don’t really care either. Martins, after his initial shock wears off, starts to follow Lime (as he ran away when Martins recognized him) and now reports to the authorities that Harry is indeed alive. As it turns out, Harry has been involved in a scheme that dilutes penicillin, and hence, results in great wealth for Harry. Harry doesn’t have a conscience about what it does to the children who are suffering from the effects of the not so potent drug. It now becomes a moral choice for Holly to try and stop Harry or let him get away with literal murder.

I’m not often a big fan of the older “Film Noir” movies, though some do stand out in my mind like “Double Indemnity” and “The Maltese Falcon”. Director Carol Reed (a man, by the way) has done a truly outstanding job here. Of course, with Orson Welles in the cast, it was usually hard to go wrong, but Cotten and the rest of the supporting players all did a fine job here. Quite simply, the cinematography is the thing that stands out as what’s memorable of the movie…that and the speech about the “Cuckoo Clock” which Welles wrote himself. As a product of the testosterone-fueled movies of today, I found it really enjoyable to watch a great movie from the days when they actually cared about making movies. Not that they don’t today, but it seemed that way. Some say this is Welles’ best movie, though it’s hard to top a movie like “Citizen Kane”. And this movie was ranked as the #1 movie of all time by the British Film Institute (and it’s ranked #57 by the American Film Institute). In either case, no matter what the ranking may be, you’ll get a great film that can fill you with enough raw emotion to make you enjoy movies again. Highly recommended.

This film went through some pretty intense enhancements (over 20,000 to be exact) with its release on DVD. Fittingly enough, this is one of four inaugural titles on Criterions Blu-ray line and to see “The Third Man” in any other form is almost a waste of time. To be quite honest, the picture on this Blu-ray is good, real good but its not that much of an improvement over the previous DVD which also looked good. Like Casablanca, this film simply doesnt feel like it was made 60 years ago, it has a depth to the transfer that makes it seem a lot newer. The additional lines of resolution do seem to give the image a more film like look to it, so for that alone it does stand superior to the standard DVD edition.
The city of Vienna never looked so good especially considering that it was in post-war Europe. Welles called Black and White the “Actor’s Friend” and I suppose it makes sense as there’s nothing to distract your attention away from what the performers are doing. The digital enhancements do make the film look great, though I’ve never seen this film in any other format, so I can’t make a side by side comparison.

On a side note, the physical display of how the image looks is interesting too. Almost all of the scenes appear to be shot on about a 20 degree angle that tends to make you turn your head. It works here, though I don’t know if every movie would benefit from this tactic. In summary, the film does benefit from what I’m sure was a painstaking process. While some faults are evident, considering the source material, it looks amazing.

Again, I draw a comparison to Casablanca as the sound is pretty much the same. We dont get any high-definition audio, only a Dolby Digital mono track and thats more than enough. As is expected from a film some 60 years old, the sound is a monaural mix and for the most part it sounds very good. I suppose the one thing that’s synonymous with the audio of “The Third Man” is the music associated with it. The zither is the musical device that is used to convey a lot of the feeling and tone for the majority of the movie. To be quite honest, I had never heard of this instrument prior to viewing this movie, so its origins are unknown to me. It’s a peculiar-looking device as well, looking more like a stretched out guitar or something. Still, the music is very upbeat and almost eerie in a sense.

Criterions standard DVD of The Third Man offered a plethora of supplements and thankfully theyve all made the leap to the Blu-ray disc. This is, of course, a good thing and another thing that is synonymous with Criterion. The “commentary” (quotes used for a reason, I’ll elaborate in a second) by Graham Greene (Richard Clarke) as well. But I’ll start from the ground up. First up is a video introduction by Director Peter Bogdanovich. Bogdanovich is a noted Welles historian and even provided a commentary track for “Citizen Kane”. He gives a brief history of the film and in essence, introduces it to us. In addition to this, I do have to add that this version and the original released U.S. version do differ by some 11 minutes. This version appears to be the U.K. version with the footage intact. But the main difference was the opening sequence. Thankfully, Criterion has given us both the U.S. opening sequence (which was voiced by Holly Martens — Joseph Cotten) and the U.K. opening sequence (voiced by Director Carol Reed). They’re a bit different, but both equally effective. I prefer the U.S. version just because the British accent tends to drive me up the wall.

We get at least two hours worth of the original radio broadcasts. The first of which is entitled “A Ticket to Tangiers” which was written and narrated by Orson Welles. Seemingly taking place before his role in the movie, we see a side of Welles that wasn’t as evil as he was in the film. Fans of Welles will know that he was no stranger to radio! Next up is the second of the two, which is a radio broadcast of the movie in radio form. It is a bit shortened and Welles isn’t one of the voices, but at just an hour, it’s an interesting feature. Both of these features are audio only, shown on the TV with an old time radio dial on the screen. There are a few featurettes, the first of the zither composer, Anton Karas and the next is rather interesting feature of the Sewer patrols. The climax of the movie takes place in the sewers of Vienna, and as a result of the movie, a special task force was established to patrol the sewers. Quite interesting and amazing as to how much power the moving image has on “real” life! There are some production photos, some re-release trailers and what is really quite amazing is the restoration demonstration. Fans of this movie already know how good it is and adding it to your Blu-ray collection is a must. 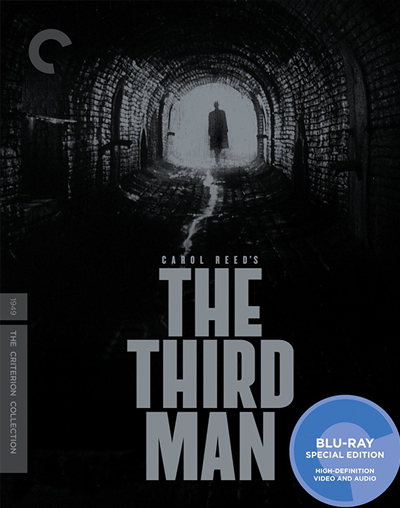