Ah, Johnny Depp and Angelina Jolie. Are there two more perfect specimens of the human race to have ever graced the screen? Well, yes, probably, but that’s not the point. It might not seem like it, but Angelina Jolie’s career has spanned just a shade over fifteen years and Depp has been around since the mid 80’s. Yes, these two have over forty years of acting experience between them. Depp has become synonymous with Capt. Jack Sparrow, his colorful undead pirate he portrayed in the first three (and soon to be fourth) “Pirates of the Caribbean” films. Jolie has a more varied past, both professionally and personally as she’s known as somewhat of a “home wrecker.” Still, this isn’t “Us Weekly” so I’ll keep her personal shenanigans out of this review (well, from this point forward). So we’ve got Depp and Jolie in a remake of a 2005 French film by the name of “Anthony Zimmer.” Will it deliver?

Depp plays pseudo-nerdy Math professor Frank Tupelo who just happens to be in the right place at the right time on a train. He also has a Frank is a tourist and is unaware of Elise (Angelina Jolie) and the bad people that are pursuing her. Elise is being closely monitored by Scotland Yard led by John Acheson (Paul Bettany). Naturally this case of “mistaken identity” has its ups and downs and each time Depp’s character thinks he has a chance with Jolie’s, the rug is pulled out from under him. I hesitate to mention movies like “North by Northwest” and “Charade” but this movie naturally steals from both of those. If you’re looking for a similar movie, watch one of those and not this.

I won’t re-invent the wheel here as pretty much everything I’d heard about this movie ring true here – there is, quite simply, zero chemistry between Jolie and Depp. Are they both good actors? Yes, very much so. But part of what makes movies great is the on screen chemistry between the two leads. I’d read where Depp’s lover/wife/girlfriend didn’t even want him to do this movie with Jolie knowing her past with her co-stars. Still, it happened and I think it’s a film that both would like to forget. I won’t say “The Tourist” is a total waste of time, I did enjoy a few of the scenes and the scenery (particularly of Venice) is nice to look at. Everything you’ve heard about this movie is true, but I know that won’t deter serious moviegoers. Don’t let the three Golden Globe nominations fool you – watch something else!

If you have the ability to filter out what’s going on in the movie itself and just focus on the visuals, you might be better off here. The 2.40:1 AVC HD transfer doesn’t disappoint and “The Tourist” has some lovely shots of Venice. Naturally whatever your thoughts on Angelina Jolie are, she does look good slinking around in her various outfits for the duration of the movie. The palette uses is warm, we get the brownish hues from the Venetian homes as they contrast with the bluish-black of the water beneath them. Flesh tones are warm and natural. Black levels and contrast are right on the money. This is a gorgeous-looking transfer, though it’s a shame that it was wasted on such a poor film.

Additionally “The Tourist” sports a rather robust DTS HD Master Audio soundtrack. There are a few bona fide moments of a “chase” or some semblance of action happens and when this occurs, the sound does come to life. The dialogue is somewhat subdued at points, though there’s a clear separation in channels. The LFE do play a small part in the film and surrounds come alive at a few given opportunities. Like the visuals, it’s a shame that a good soundtrack was wasted on such a bad film.

When a movie comes to Blu-ray with a lot of bullet-pointed features, there are one of two reasons as to why this might be. Either the movie was a blockbuster and they load it up thereby giving the fans what they want. Or…the movie was a bomb and they figure by loading it with a lot of things, it’ll entice people to check out the title. This, as you might have guessed, is one of the latter. We start out with “Bringing Glamour Back” with some interviews with the cast and crew as they wax philosophical on “classic” Hollywood. “A Gala Affair” gives us a more in-depth look at the dance sequence with emphasis on the wardrobes and choreography. There’s also an alternate title sequence, some outtakes and some trailers (though not for this film) shown in HD. Moving onto the Blu-ray exclusives, we find “Canal Chats” as the cast discusses the challenges of shooting in Venice and in “Action in Venice” pretty much says the exact same thing. Bullet points, remember, bullet points. We also get a real-life look in “Tourist Destination: Travel the Canals of Venice” for those of you who can’t go then this is the next best thing. Finally we get a rather dull and bland audio commentary with writer/director Florian Henckel von Donnersmarck. The disc is also BD Live enabled with Sony MovieIQ’s technology. 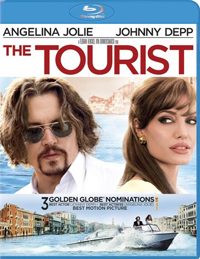