It seems there’s a growing trend over the last few years to adapt films from the Asian cinema. Off the top of my head “The Ring”, “Shutter” and “The Grudge” come to mind. Granted, the purists out there will naturally gravitate towards the “original” as remakes or adaptations are rarely quite the same. Case in point, we have “The Uninvited” which hit theaters in late January (the veritable graveyard for any movie to be released, I might add) and was adapted from the Korean film “A Tale of Two Sisters” and in many ways, that’s more what the film is about above anything else. To look at the cover of the film or see the trailer, it’s touted as a horror film but after seeing the movie, it’s quite clear that this is more on the psychological level. Regardless, “The Uninvited” does have its share of moments and here’s what to expect from the adaptation.

We meet Anna (Emily Browning) as she’s exiting the mental hospital where she’s been for the past ten months. There was an accident at her home that ended up killing her mother and Anna’s been burdened with the guilt from it ever since. Upon her release, Steven, her father (David Strathairn), an author, picks her up and returns her to home. We find Alex (Arielle Kebbel), her sister, waiting for her and the two reconnect. Things have changed since Anna left, though, as Rachel (Elizabeth Banks) the nanny has now moved in and is engaged to Steven. Naturally this doesn’t sit too well with Anna and Alex and as Rachel becomes more and more domineering, the two decide to delve into her past. Now I did neglect to mention the “supernatural” part of the film in that Anna keeps having dreams involving three children cut up and placed in garbage bags. Anna doesn’t quite know what to make of all this until she and Alex bite off more than they can chew. Will the sisters find out Rachel’s secret or are they doomed to be miserable while their father remains clueless?

I had no idea what to expect when popping in “The Uninvited”. I figured it was another horror movie and I’m always up for a good scare. I was wrong, of course, as the story was rather intriguing. I’m tempted to check out the original Korean film though the producers admit in the featurette that they changed it somewhat and didn’t even watch the original film before purchasing the rights. Go figure. The real standout, for me, was Arielle Kebbel as I felt her performance was the strongest in the movie. And Elizabeth Banks continues her run in yet another movie ? evidently this woman sees a script and says “Yes” every time one passes her by. Still, she’s fine in her role here. Don’t expect to be too scared when watching this, though I have to say that some of the images do stay with you. You could do a lot worse than this, but there are better in this genre as well.

“The Uninvited” is brought to Blu-ray in a 1.78:1 AVC HD transfer that looks, for the most part, flawless. They don’t make much of it, but the movie is supposed to take place in Maine (though it was actually shot just north of Vancouver) and we do get several beautiful, scenic views of the countryside and the crisp waters of the ocean. Fleshtones seem a bit washed out, but detail is spectacular. Take, for example, the detail on David Strathaim’s face, you can see every pore and then some. The dark scenes have no indication of artifacting or noise and I’m hard-pressed to find anything to really complain about. This is what we’ve come to expect from a day and date release from Paramount and “The Uninvited” delivers visually.

The Dolby TrueHD soundtrack isn’t one of the most robust out there, but I caught a few instances in which the surrounds really added to the suspense of the film. Dialogue is very warm and natural as we might expect and the limited soundtrack does sound just a bit above average. I doubt that too much thought went into the audio as even a few key scenes seemed deliberately toned down (the burning of the house comes to mind). Viewers will most likely be pleased here, though there are certainly better examples of uncompressed sound out there.

There’s not a lot to crow about on the supplemental front, we get an alternate ending which really isn’t that “alternate”, four deleted scenes and a featurette with the producers, director and actors as they all tell their experiences on the film. There’s not even a trailer. 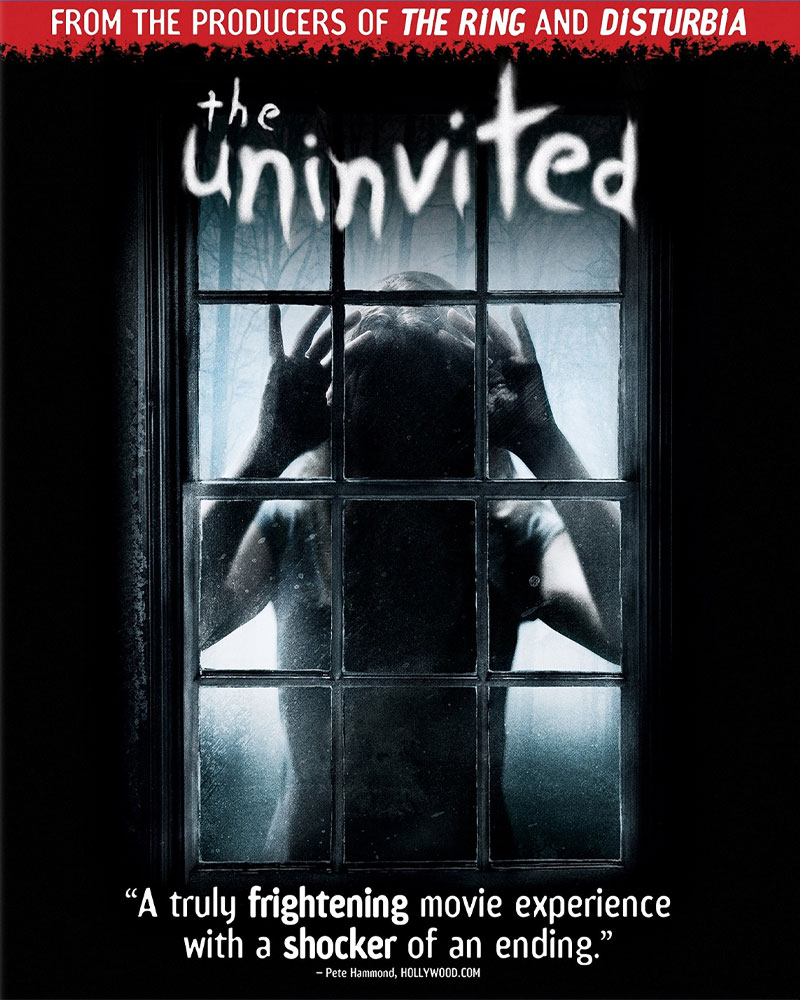