When Thoroughbreds arrived in theaters, I had planned on seeing it, but for one reason or another I kept putting it off. Before long, it left theaters near me and I was waiting for it to arrive on Blu-Ray to finally check it out. The premise sounded intriguing, the reviews were pretty good and it featured one of the final performances of the late Anton Yelchin. It’s all the more sad that it’s coming up on the two year anniversary of his death. I’ll touch on it more in a bit, but he only has a minor role here, but it really is a great performance. We’re reminded of what a great actor he was. And really that needs to be the case in a film like this where we only have less than a handful of characters for the actors to portray them well. This is a dark, strange film with comedic undertones, but it kept me hooked waiting to see what would happen next.

Lily (Anya Taylor-Joy) and Amanda (Olivia Cook) have known each other since childhood, but grew apart. Now in High School, they reconnect. Their personalities couldn’t be more different as Amanda speaks her mind and has no emotions, as she puts it. She can be a bit of a downer as well. Lily, on the other hand, is much more conservative and keeps to herself. Lily lives with her mother and stepfather, Mark (Paul Sparks) in a massive house that’s a bit secluded. She really doesn’t like Mark as he is something of a jerk. The film does a good job at giving this character a deeper personality so that while he is the villain of the film and puts the central plot into motion that we at least can see his point of view as well. The two girls eventually come up with a plan to kill Mark. This brings in another character into the picture. Tim (Anton Yelchin) is a low-key drug dealer with big ambitions. They learn that Tim has a gun, but also try to blackmail him into killing Mark.

I won’t reveal too much more about the film as it’s something of a slow-burn, but that works here. The characters are so rich and interesting that I cared to follow their journey and see where things would go. Some have compared this film to the 80’s classic, Heathers and I could see that. It definitely shows influences of that film, but it never feels like a rip off. There are some tense moments as well as we’re anxious to see the outcome. Will the girls go through with their plan or will they have a change of heart and call the whole thing off? You’ll just have to see for yourself. Tim is such an interesting character too and in his few scenes, he makes a strong impression. It did become a bit bittersweet seeing Yelchin now after his death after almost two years. His character also provides some comedic moments that help liven the film up a bit as it veers into pretty dark territory. I didn’t loveThoroughbreds, but I enjoyed it and it kept me hooked. It’s definitely worth checking out.

With the majority of the film taking place inside a house, the visuals aren’t broad, but the image is presented well. It’s an AVC encoded 2.39:1 ratio with strong detail and colors throughout. The print is fine and free of obvious flaws as well. Again, it’s a simple film visually, but it looks great here.

With this being a largely dialogue driven film, the vocals dominate. Thankfully, they have the clarity I’ve come to expect. The DTS HD track works well given the type of film we have. It may seem more limited, but I don’t hold that against it as it’s such a talky film. The score also came across strong as well. While not an overly robust track, it serves the film at hand in a positive manner.

Limited to a few characters and largely one main setting, Thoroughbreds kept me with it. The cast are a large reason why this works so well, with each actor understanding their complex character. It’s dark stuff with touches of comedy that works. It’s also bittersweet to see Anton Yelchin in one of his final roles. Recommended. 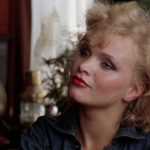 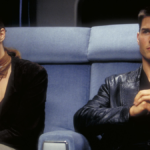