A few years ago, well three actually, I was turned onto a show called “True Blood.” I’d never really heard of it, but it being an HBO original series I figured that it was at least worth a look. HBO has long since been known for their original programming and with recent successes like “Sex and the City”, “The Soprano’s” and “Six Feet Under” this new series didn’t have a lot going against it. Now, admittedly, I loved the first season. A world where vampires and people can co-exist and the vampires are forced to drink a manufactured blood supplement? Ok, I’m interested. We met the cast of characters and get to know them a bit. Flash forward to the second season and, as expected, things start to change a bit more. We meet a larger cast of characters and Eric (Alexander Skarsgard) emerges as one of the breakout stars of the show. Now if we’re going by billing then Sookie (Anna Paquin) and Bill (Steven Moyer) are the leads, but this ensemble cast is what really makes the show work.

Moving onto season three we see that it starts essentially right where the second one left off. Bill has been captured by some local “drug” dealers who are having their way with his blood (vampire blood is better than any drug out there to humans). This is one of the plotlines of the season – the selling of vampire blood. The cast is still expanding as we branch out from Louisiana (where the show takes place) to neighboring Mississippi. We meet other sheriffs, other kings and even the queen of them all – Queen Sophie Anne (Evan Rachel Wood). But wait, we’re not done yet! Yet another new addition to this season are werewolves! Yes, werewolves. Vampires weren’t enough, you see, and “True Blood” needs to keep pace with the “Twilight” books. This is about where I drew the line. While the first two seasons of “True Blood” were truly good (pardon the pun), I just felt somewhat disconnected with the third season. It seems to be a trend, where the show gets too big or too popular that it somewhat forgets what made it watchable in the first place. Is it a bad show? By all means no. It’s a fantastic show and probably one of the best on the air, I’d just seen enough and maybe I need to take a break from blood and fangs. For fans of the show, this is more of the same (perhaps a bit too much “more” of the same) as they gear up for Season Four.

The third season of “True Blood” looks exactly like the first two on Blu-ray, so with that said…these episodes of “True Blood” are shown in a 1.78:1 aspect ratio and these look stellar on Blu-ray. The opening credits have a montage of stock photography that really showcases the entire spectrum of what we see on the show. The entire series has a somewhat muted appearance to it, though there are certainly bold, bright colors. An in any feature that deals with vampires, we can be assured that blood will come into play and it does. This Blu-ray looks as good if not a bit better than the HD broadcasts that I watch episodes on and for anyone wanting to have the most pristine version of “True Blood”, well this is it.

Again, like the first two seasons, the third season sports a DTS-HD Master Audio track that, at some points, rocks. While it’s true that a lot of television series aren’t really made for dynamic audio, this one might be an exception to the rule. This uncompressed mix sounds very robust during some key sequences. There are gunshots, fires, fights, car chases and much more that really make use of all 5.1 speakers. Dialogue is as clear as we can expect, though with the series taking place in Louisiana, it’s hard to make out some of the thick accents. This is a good mix and I’d forgotten how good this series actually sounded.

Like seasons past, we get audio commentaries on half of the season’s episodes by the directors and actors as well. Creator Alan Ball even pops up on one of the episodes. These tracks are articulate and offer a plethora of information on the show. “Post Mortems” are some smaller short segments that aired after the show. These are rather whimsical in nature and fans of the show will love their inclusion here. “Anatomy of a Scene: Episode 2” shows us a werewolf attack and all that went into staging and shooting this scene. “True Blood Lines” is actually very clever and helpful. The cast has gotten so big that this interactive guide does help you keep track of who’s related to who. “Previews and Recaps” are essentially just that – we get all of the “Previously on ‘True Blood'” and “Next Time on ‘True Blood'” segments. Lastly we get a music video by Snoop Dog as he performs “Oh Sookie.” Call me jaded, but I think your show might have jumped the shark if Snoop Dog is performing music videos. Lastly a Blu-ray exclusive in which every episode has a picture-in-picture feature that gives us more information about the show. Fans will love this feature and it’s a great reason to get the Blu-ray over the DVD. 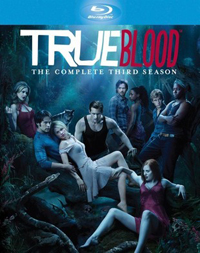