I had a bad vibe about Vibes pretty early on. It’s one of those films that you hope might get better, but never does. A sudden urge to push the stop button and end the misery came over me, but that’s hard when a review is needed. The film stars Jeff Goldblum (an actor I don’t particularly enjoy) and Cyndi Lauper in her film debut. They both play psychics who ultimately get roped into finding lost gold. Unfortunately nothing in the film works and it struggles to find humor in the situations and I just couldn’t bring myself to care enough.

Nick (Goldblum) and Sylvia (Lauper) meet at an NYU research center where the two share similar traits with their psychic abilities. Nick is able to determine the history of items with a single touch. Such things include kitchen knives and random objects. Sylvia has her own skill as she can contact with a spirit guide. Admittedly there are some mildly amusing early bits where we see these characters at work, but those segments don’t last long and then the film gets in their way. We meet a man named Harry, played by Peter Falk who comes to Sylvia one night claiming that his son has gone missing in Ecuador. We learn as the film progresses, the real reason he sought them out. It’s a search for the lost city of gold. Harry knows these two characters have psychic abilities, so it’s funny that he would employ these two characters in the first place, but that’s beside the point.

There’s a lot going on in Vibes, but very little actually happening. It’s a lifeless and forgettable film. The leads have no chemistry and the plot is hard to become invested with. There was potential here, but the direction the film goes isn’t the least bit interesting. All this in addition to the rather predictable nature of the story make it a chore to sit through. Skip it.

We get a 1.85:1 transfer that works well enough for the film at hand. It never rises to the level of greatness, but it also doesn’t have any notable flaws either. There is some softness and grain on occasion, but otherwise it looks just fine. Details are good and the colors appear solid enough. I’m sure if more effort was put forth that a better image could’ve been produced, but this is fine.

The DTS 2.0 track sounded about as I expected. Like the image, it works well for what it is. At no time did I feel it was seriously lacking. Vocals were fine and clear with enough added depth to not feel restricted. Clarity is what I often want from tracks and this got the job done.

Vibes simply stinks. There’s no two ways about it. It’s a film that just doesn’t work. Boring, witless and lifeless, the film should be avoided at all costs. I just couldn’t bring myself to care about anything on screen. 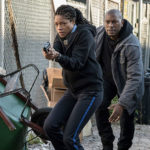 Black and Blue (Blu-ray)
Next Article 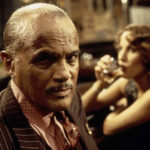