Lately, I have become a really big fan of Eva Green. There’s just something about her that I find intriguing. Of course, her commitment to not shy away from nudity in a few films is certainly a plus, but I just find her fascinating as an actress. Shailene Woodley also stars in the film and continues her fine work as an actress. Woodley plays Kat Connor, she narrates much of the film, and doesn’t have the best relationship with her mother, Eve (Eva Green). Her father, Brock (Christopher Meloni is something of a pushover. It’s clear that his marriage to Eve is missing something. Eve seems like the typical 1950’s style housewife on the surface, but it’s fairly obvious that she’s unhappy. Kat and her mother don’t always get along, either. Eve intrudes on Kat’s privacy on more than one occasion, and even shows off in front of her friends. Kat becomes close to her dimwit neighbor, Phil (Shiloh Fernandez) and Eve even seems to take a liking to her as well. Phil cares for his blind mother. The plot kicks into high gear when Eve goes missing one day. Thomas Jane plays the police detective in charge of the investigation. Kat even takes a liking to him, and eventually the two of them become romantically involved. The film takes place in flashbacks during the late 80’s and leads into the 90’s with Kat eventually going off to college. Even when Eve has gone missing, we still see scenes with her and her family before she disappeared. This also helps us try to piece together the scenario to see what really did happen to her. By giving us a look at her daily life, we wonder did she simply run away. Was she murdered? I found myself anxious to see how it would all turn out.

I wasn’t expecting to enjoy this film as much as I did, but I was hooked early on. The central mystery kept me involved and I had no idea where things were headed. There’s a last minute twist that throws an extra turn at us. I can’t say I was expecting it, but in hindsight, it seems all the more obvious. The performances are all top notch, with Woodley continuing her already solid acting career. Green nails it as well in a tricky role. The direction, pacing and acting are all solid. Add an interesting plot and things just add up. The film is well worth checking out and will likely benefit from repeat viewings. Lastly, Kudos to Woodley for not shying away from nudity. It doesn’t feel gratuitous or out of place. It’s simply part of the story. She’s a young girl who has a sexual appetite. The film comes highly recommended.

The image is universally strong all around. Colors are always vibrant and clean, the print displayed no issues either. Flesh tones were even and smooth and background shots remained strong as well. We see a scene with Eve laying by the pool that displays strong definition as well. The image is AVC encoded with a 2.35:1 ratio. Fans will be pleased.

Also solid (though not robust) is the DTS HD track. The music kicks in on occasion and there are some scenes where the rear channels get good use, but this is a quieter film where the dialogue is what drives it. That’s fine as the vocals sounded clean and clear. As mentioned, the 80’s music heard on the soundtrack comes across nicely. 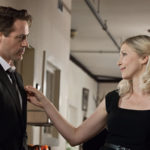