I had forgotten about Who’s Harry Crumb? Prior to watching it again for this review, but it was nice to revisit it. While I had seen it before, it did mostly slip my mind. Being a fan of John Candy, this isn’t essential viewing by any means, but is still a great showcase for his talent. The film makes great use of his physical comedy and presence. He dons many disguises in the film and somehow makes most of them work. Even if the stale kidnapping plot is a little lame and tired, the film thankfully doesn’t overstay its welcome. It only helps that Candy is front and center and helps drive the plot forward.

When Jennifer Downing (Renee Coleman) is kidnaped, her millionaire father P.J. turns to Crumb & Crumb to help solve the case. Eliot Draisen (Jeffrey Jones) is who is actually behind the kidnaping, making it a bit awkward. Eliot puts Harry Crumb (John Candy) in charge of things. Since Crumb is a bit of a bumbling idiot, Eliot sees this as clear skies and smooth sailing. With Harry being more than a little incompetent, Eliot thinks he will in fact get away with this and get the ransom money. To help with matters, there’s Nikki Downing (Shawnee Smith) who is P.J.’s younger sister. Nikki and Harry spend a lot of time together as they try to solve the case.

To best enjoy Harry Crumb, one has to put aside the plot and just go with things. The plot is flimsy and obvious, so we count on the laughs to get us through things. And they do to a large extent. As mentioned, this is not Candy’s finest hour, but he did far worse films as well. This falls pretty comfortably in the middle. There are a lot of sight gags that work largely because the participants know how to play their roles. There’s an amusing bit with Crumb spying on a rooftop and then he slides down to a window which flips, causing him to fall inside. He dons many disguises in the film and most of them are amusing. This is a film that’ll keep you smiling even if it isn’t necessarily laugh-out-loud funny.

Probably the best the film will look (unless there’s a 4K release down the road), the image remained pleasing overall. Some shots in particular showcased fine detail, making great use of the Beverly Hills location. Only occasional grain and softness occurred, but I was still surprised by how nice this looked overall. The image is AVC encoded with a 1.85:1 ratio.

The DTS HD 2.0 track is good, but not great. It can feel a bit limited at times, but at the right volume, the vocals were clear enough. Things do vary a bit with the soundtrack, so keeping the remote nearby will help. I do think things could’ve been touched up a bit, but for the film at hand, it could sound worse.

Zilch! There isn’t even a main menu or scene selection. The film simply starts once you load it. A big draw to this release is the retro style VHS slipcover.

Who’s Harry Crumb? Is a nice and pleasant little film, but not essential John Candy viewing. He has better and worse films, with this falling somewhere in the middle. This disc features good Video and decent audio, but absolutely no features, there isn’t even a main menu on the disc. The retro slipcover is rather neat, though. Recommended only for collectors or those who have seen and enjoy the film. All others should give it a rental first. 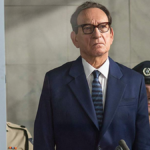 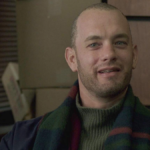