Agnes (Harriet Andersson) is in the final days of her life, as she is dying in a most painful, prolonged fashion. But as she lives the remaining hours, she is joined by her sisters, Karin (Ingrid Thulin) and Maria (Liv Ullman), which seems to be a potential comfort of sorts. But that isn’t always the case here and as Agnes is being destroyed by cancer, her sisters seem to become quite bitter, as opposed to comforting, or at least sympathetic. As time passes, the two visiting sisters show their bad sides more than a little, via all sorts of petty issues that send them into fits of all manner of negative emotions, not the most peaceful situation for Agnes, to be sure. As her sisters have their emotional escapades and her nurse Anna (Kari Sylwan) remains by her side also, Agnes begins to find a new place with the peace she desires, her own past. Through memories of the times when she was truly alive, Agnes can look away from the unrest she is involved in now, since the past has some wonderful moments to rest upon.

I am very pleased to own this film on this format, as it is a beautiful, haunting picture that deserves a wonderful treatment. I am always taken in by the film’s lush visuals, in terms of composition, movement, and overall impact, a tremendous effort indeed. Sven Nykist’s gorgeous cinematography won an Oscar and for good reason, as he paints a most stunning portrait with the cameras, to be sure. But the approach to the visuals is a tempered one, as it provides a terrific image at all times, but never becomes too pretentious, which can often happen in films of this ilk, though thankfully not in this case. As memorable as the visuals are however, they are by no means the focal point of this film, instead the real center lies within the characters and by turn, the actors who bring them to life so well. The cast seems so natural here, which is vital to the material and of course, Ingmar Bergman’s able handed direction keeps the performances sewn together with the other elements. The slow pace and lack of action might scare some off, but anyone in search of great cinema should give this film a look, especially via this wonderful release.

As he does with most of his films, director Ingmar Bergman infuses Cries and Whispers with deep, intense concepts, which the characters then try to cope with, in various ways. I know we don’t see many modern films that tackle this kind of subject matter, so I think some casual movie fans will have trouble with this, as well as other Bergman pictures. Even so, anyone interested in real cinema and the history of cinema should visit his resume, as his films have inspired many others, as well as standing as some of the finest films ever created. I am not a massive fan of Bergman’s complete body of work per se, but I think he has made some excellent efforts and while slow paced & introspective, I think even the shortest attention span viewer should give his work a chance, or two. Other films directed by Bergman include Autumn Sonata, Through A Glass Darkly, The Magic Flute, Persona, Wild Strawberries, and The Seventh Seal. The cast here includes Liv Ullman (Lost Horizon, A Bridge Too Far), Ingrid Thulin (Winter Light, Mother’s Heart), Kari Sylwan (Face to Face), and Harriet Andersson (Gossip, Crime in Paradise).

Cries and Whispers looked pretty good when it came out on Criteron’s Standard DVD issue back in 2001. This is a pretty interestingly-shot film and one that’s a bit hard to score. I will say that the 1.66:1 AVC HD image looks remarkably better thanks to Criterion’s new 2K scan of the film. The image is much cleaner and sharper than I expected, with lush colors and accurate contrast – very impressive work indeed. Colors are a bit stronger and more saturated, detail has been bumped up a notch or two and the film feels like it has more of a “film-like” quality, though some grain does persist. All things considered, it’s a nice upgrade from the previous edition.

What hasn’t really changed that much is the included mono track. Granted, there’s not a lot that can be done with a mono track and the original Swedish language is offered.  Criterion has also done a new subtitle translation (I have no idea if the Swedish language has changed that much in the last few decades), but I found all the elements here to be in fine form. It’s a nice track, certainly something that adds to the film and won’t test the limits of your system, by any means.

Criterion has added a few new supplements to this disc from their 2001 DVD, so if you’ve been holding out – congratulations, you win!

This is one of Ingmar Bergman’s more “interesting” films if you ask me. I liked it, but it’s a rather strange film from my perspective. On a technical level, the transfer has been improved from the 2001 Criterion DVD and several new features have been added. If you’ve been waiting for a more robust version of this – your wait is over. 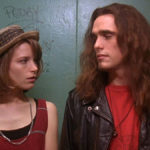