A short while after I started DVD Authority, I discovered some movies put out by Criterion. I’d seen many of the films, but had never really been familiar with the “Criterion” label per se. As it so happens, one of the first titles I bought on the burgeoning DVD format was a little film entitled “Rushmore” directed by Wes Anderson. Anderson has directed a few of my favorite films of the past fifteen years including “Bottle Rocket” and “The Royal Tenenbaums.” But it’s with “Rushmore” that he really made a name for himself and it brought somewhat of a resurgence to Bill Murray, his career and showed that he could do drama just as well as he could do comedy. But the real star of “Rushmore” is Jason Schwartzman, son of Talia Shire (Adrian from the “Rocky” movies and a Coppola to boot). Schwartzman has made a name for himself playing quirky characters and he does it well, notably in this film and “I Heart Huckabees.” Let’s dive in and see what all the fuss was with “Rushmore.”

Meet Max Fisher (Jason Schwartzman), is your average high school kid. Well, maybe not. He dreams of solving impossible geometry problems but in reality he’s flunking out of school. Max is the epitome of an underachiever and has either created, been President or Vice-President of every extracurricular activity that the Rushmore school has to offer. The result are bad grades. Enter Mrs. Cross (Olivia Williams), an attractive Harvard graduate who is now a Kindergarten teacher at Rushmore. The two become friends, but it’s evident that Max wants to become more so. Obviously, this will not work as Mrs. Cross (I’ll call her Rosemary from now on) is nearly double his age. Among all this chaos is Bill Murray’s character, Herman Blume. Herman is also a Rushmore graduate, who is now a very successful, wealthy steel tycoon. His marriage is on the rocks, he hates his two annoying kids and also starts to fall for Rosemary (all while trying to discourage Max from pursuing her). Things escalate between Herman and Max, and it comes to a knock down-drag out between the two. Who will prevail between Herman and Max?

“Rushmore” works on several levels, but mainly due to the performances of the two lead actors: Jason Schwartzman and Bill Murray. These two contrast and play off one another like any great duo in films and the offbeat style of the film seems tailor made for these two. I’ll be the first to admit that “Rushmore” isn’t for everyone and if memory serves, I tried to show it to my parents with sub-standard reception. Still, I’m one for these kinds of films and though this is a bit more on the mainstream side, it did open the door for Anderson. Criterion’s treatment of this title is second to none and it’s not hard to believe that Disney’s original disc released back in 1998 has been the only non-Criterion version out there. If you’ve not had the opportunity, “Rushmore” is that little gem that’s waiting for you to discover it.

There’s a web site out there that I’m sure you’ve heard of, it’s called The Digital Bits. Early on they did a “Guide to Anamorphic Video” and used “Rushmore” as an example. You can check that out at this link. That really made an impression on me (well, obviously if I’m referencing an article that was published in 1999) and now we’ve got “Rushmore” on Blu-ray. Criterion is a stickler when it comes to their films and this is good as it nearly always gives us the best audio and video quality that’s literally available. The 2.35:1 AVC HD transfer was supervised by Wes Anderson himself and a new 2K scan was done to remove some dirt, debris and scratches that were on the print. The result – stunning. Colors are bright, despite the somewhat muted color palette used. Detail is sharp and black levels and contrast look amazing. “Rushmore” never looked bad, but this new Blu-ray simply looks amazing. A superior effort from Criterion.

Amazingly enough, the audio sounds just as good as the video looks. The original 5.1 mix was re-mastered to remove any unwanted sounds or noises and the result with this DTS HD Master Audio soundtrack is nothing short of near perfection. Anderson is known for his soundtracks and we get plenty of samples with tracks by The Rolling Stones and The Who among others (“The Royal Tenenbaums” has one of my favorite Paul Simon songs with “Me and Julio”). There’s a war scene towards the end of the film that I’d put up against any modern movie. The surrounds are surprisingly active, the LFE are involved and dialogue sounds phenomenal. While not the perfect mix, it delivers on all levels and exceeded on many others.

The original Criterion DVD contained a plethora of supplements and it looks like this Blu-ray has ported everything over. Here’s a rundown of the supplements. First up is the commentary by director Wes Anderson, co-writer Owen Wilson (yes, that one) and actor Jason Schwartzman. It’s the same one that appeared on the original disc, but no less entertaining. We get tons of information about the shoot, the characters and everything in between. Fans of the movie need not only listen to this but more than likely already have. An interesting interview with actor Bill Murray and director Wes Anderson for “The Charlie Rose Show” is included as they discuss Murray and his expansive career. Running at nearly an hour, this is some good stuff. “The Making of ‘Rushmore'” is just that, a behind-the-scenes documentary directed by Eric Anderson (Wes’ brother). Some auditions are included from Jason Schwartzman, Stephen McCole and Sara Tanaka among others. A feature I’d forgotten about is the 1999 MTV Movie Awards shorts with parodies of “The Truman Show”, “Armageddon” and “Out of Sight” included. The original theatrical trailer is present as is an illustrated booklet with an essay by Dave Kehr. 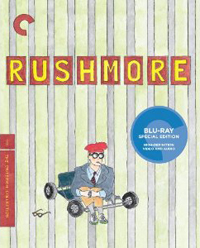