Going to New Jersey to catch a movie was always a sweet escape for this viewer. It’s for the most part a decent crowd that’s eager for a film and there’s always something to look forward to and the popcorn comes out just right. There was one such place that this viewer now goes past on the Garden State Parkway with it’s recent closing that for one such time in 1991, a film released in September came out for the first day not knowing what to expect with almost no trailer but just one name that drew this viewer in regardless of all the other names: Terry Gilliam. A friend and I would have endless Python chats and laugh ourselves silly as to which sketch was funnier but one thing always rang true and that we knew with any project involving Terry Gilliam, anything is possible. So entering with the cast minusing any Python members, we sat down on the first night that Friday of the tale of two men from different walks of life reaching out for each other in a way they never dreamed possible in New York called The Fisher King.

Jack Lucas (Jeff Bridges) is a rising radio shock jock, with the big plans, that talks the talk and tells it like it is to callers on a daily basis. Out of one such caller comes a odd man named Edwin. At first Jack takes it lightly like any other caller and offers advice to leave off on. The day seems to go fine until during one dancing mood Jack pops on a television with his face on there and finds out that the very caller he left off on decided to go on a shooting spree. As a result this put a three year dent into Jack’s big plans losing the radio show and is losing the will to live even with a different girl and a different set of rules. He looks to end it all one night when a few rough characters come along and beat Jack up. This almost seals his doom until a man in the shadows (Robin Williams) and his merry men saves Jack’s life and take him along in the shadows of a weird, dirty, yet imaginitive world. What seems to be a random act of kindness from a street dweller becomes a little more when Jack starts to realize they have a connection. It’s this that draws Jack to do good for this man with the name Parry.

To give any more away would spoil this unique yet lovely trip of a film. From the great performances by all to the very end when it all comes together for our two main characters, there’s something in between that still amazes. There’s one particular scene (for those who have seen it, you know which one) that with the great vision that Terry Gilliam has, I don’t usually put the term movie magic to associate a part of a film because it’s a hard thing to accomplish, but in this film in that one scene that has silent movie inspiration written all over it, it’s there and it’s hard not to love it.

Jeff Bridges plays Jack as a self loving disc jockey that hates the world and his only safe haven is behind that mic and its in that one throw away moment that he sees life from the other side and realizes he can do good for someone. Robin Williams plays Parry, a wildly imaginitive homeless man who sees the good in life from a perspective that Jack has never seen. Yet with all the low in the world, Jack gets drawn in and despite Parry’s eccentricities feels that the good he does for Parry can inspire some greater love for his girlfriend as well (played beautifully by Mercedes Ruehl) who’s had to put up with his downer routine after the fallout of his radio gig and starts to see a change in her man that she likes. Rounding out this fine cast is Amanda Plummer as Lydia, who has her bit of quirks but is the object of affection for Parry and nothing can spell acting better than all of the scenes involving Plummer and Williams.

Nothing would be complete aside from the terrific script and the score and the sets that retain the film’s artistic beauty than with the direction of Gilliam taking another visionary step to show that even some good can make people more productive in their imagination and positive and no matter how the world can be a down place, there’s still some beauty that can be seen in between.

From the first time, this viewer didn’t know what to expect but it’s a film to stick with its entire running time to appreciate start to finish with no pauses in between. It may take you a few viewings to really get the movie but this viewer got it right away and since then proud to say The Fisher King is a crowning achievement in a select bunch that I view 3 times a year at random times.

It’s been a while, a long while, since I’ve seen this movie. But with so many uncertainties in life, I know that when Criterion puts out a Blu-ray it’ll look the absolute best it ever has. Rarely, if ever, I don’t think I can recall an instance where the Criterion version of a film looked worse than another existing film put out by another studio. There might be things like “this version was preferable or was framed a bit differently” but on the whole, seeing that asked “C” means a visual feast. Such is the case with The Fisher King. Image Entertainment put out a Blu-ray in 2011 which looked good, but Criterion has knocked it out of the park thanks in part to a new 2K restoration on the movie. While not quite as dark as the Image version, this looks a bit more film-like. Scenes seem a bit smoother, flesh tones seem a bit more natural and normal and detail is improved from the DVD and looks on par with the Image Blu-ray. Gilliam was involved with this overhaul as he has been in the past with Criterion, so it’s no surprise that this looks as good as it does.  A superb effort.

I’m in favor of whatever makes a movie sound the best and that’s the case with the included DTS HD Master Audio mix. I wouldn’t have been that surprised to see a surround version included, but I really have to applaud their efforts here. I suppose the best word I could use for this mix is “understated.” It won’t hold a candle to today’s super hero, action/adventure films, but this really is a solid, consistent effort throughout. George Fenton’s score resonates and it was like a new experience seeing the film in its full uncompressed glory.

Criterion released this film as a part of their collection way back in 1991. Remember LaserDisc? No? It’s that big album-sized thing that came before DVD.  Anyway, this new Blu-ray has several new extras, though this has obviously been a favorite of Criterion’s since it was released.

The Real and the Fantastical – New interviews with Gilliam; producer Lynda Obst; screenwriter Richard La Gravenese; and actors Jeff Bridges, Amanda Plummer, and Mercedes Ruehl tell the tale of the production of the film.

The Fisher King isn’t Gilliam’s most obscure work, but it has its moments. Over the years I’ve grown to really love and admire this film though when it was first released, I wasn’t sure what to think (then again I was only 18 so what did I know). Though a fairly decent Blu-ray existed, this Criterion version looks and sounds better and offers a wealth of supplements that really add to the allure of the movie. If nothing else, it’s a testament to how truly talented Robin Williams was as an actor. 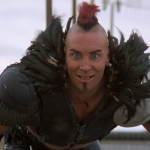 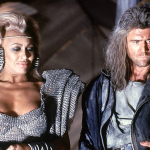