As the man who claimed the throne during the Qing dynasty, Yongzheng had a lot of power within reach, which he used quite often. But he was not a kind and just leader, instead he persecuted his enemies once he took over the top position, which of course, upsets many within the region. In fact, it is said that the Shaolin Temple followers might stage a rebellion and seize control of the throne, if just to end his reign of terror. Of course, it is believed that few could stand a chance against the masters of Shaolin, so this worries Yongzheng. In order to learn the truth of the intentions of the Shaolin disciples and to gain additional strength himself, he even devises a plan to enter the temple and become a student. His plot is to pose as a wealthy, but not well known man and begin his lessons with the masters of this sacred martial arts technique. As time passed, his plan unfolded as he had expected and he soon mastered the Shaolin arts, which means he must face off against The 18 Bronzemen. Once he passed that test, he is free to leave and return to his position, but what will become of China with such a powerful tyrant in control?

This sequel isn’t a true sequel, but it has the same tone and retains some traits of the original, so it qualifies, I think. As with The 18 Bronzemen, this film has some an odd sense about it and that enhances the entertainment to me, although those used to more mainstream cinema might be a little bothered. The storyline makes about as much sense, while those lovable bronzemen return, this time with more style and improved fight scenes. I liked the training sequences in this movie a lot, especially the ones with the bronze robots, which have to be seen (and heard) to be believed, very enjoyable hijinks, to say the least. In the end however, this is pretty much more of the same offbeat, entertaining antics seen in The 18 Bronzemen. This could be good news or bad news though, as fans will see it as another fun picture, while those hoping for a better venture the second time around, well, they’re left out in the cold here. So if you’re a fan of The 18 Bronzemen or just can’t get enough old school martial arts, check out The 18 Bronzemen: Part 2. And of course, if you don’t have the original film, you’ll want to nab both at the same time.

The 18 Bronzemen: Part 2 is presented in a 2.35:1 widescreen transfer, which is not enhanced for widescreen televisions. The image here leaves a lot to be desired, but I am glad it is widescreen at least, though anamorphic enhancement would have been welcome. You’ll notice some softness, as well as frequent print defects, but given the age & nature of this picture, I’m surprised it looks this good, to be honest. A lot of the shimmering and jagged edges could have been cleared up with an anamorphic transfer, but even as it stands, this is perhaps the finest this film has looked in decades.

As opposed to the horrendous English dubs I’ve heard, the included Mandarin option is a welcome change, without a doubt. As expected, the materials have some worn spots, but given the nature of the film, I won’t be too harsh. I noticed the music was sometimes quite shrill, but the vocals and humorous sound effects come through well, so given the material involved, I’ll grade this on a slanted scale. The synch is off, but since these films weren’t recorded with in synch audio anyway, I can’t be too much of a stickler there. You’ll find English subtitles here, but they’re in the lower section of the widescreen bars, which prevents using the zoom feature and of course, that will frustrate widescreen television owners.

This disc includes some talent files, but no other supplements. 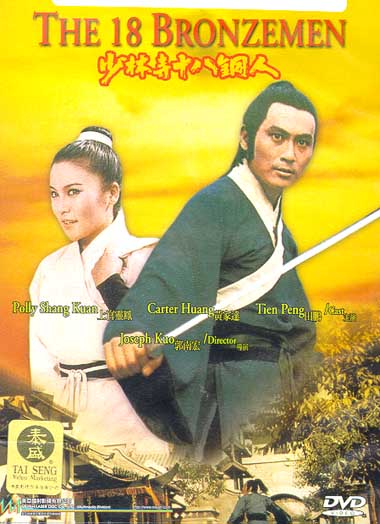