Herschell (Steven Hawkes) is a big, strong biker with little to be afraid of, but when he stops to assist some ladies in distress, he enters a whole new world. He offers to help out a young woman with a flat tire and she invites him to join her at a party, one thrown by her more wild, uninhibited sister. Of course, he agrees and discovers that the two sisters couldn’t be more different, one a religious good girl and the other a loose party girl. At the party, Herschell can’t resist a toke or two of the bad sister’s weed and soon enough, he admits that he loves the stuff, cannot get enough, and is probably hooked on the green stuff. Now that he’s a full blown addict, he needs money to continue his addiction and that leads him to a local turkey farm, which seems like a normal place, but turns out to be home to one disturbed scientist. This scientist has been doing some experiments on a group of turkeys and gives some of the meat to Herschell, which sparks some changes that no one could have seen coming, to say the least. His head evolves into a giant turkey head and he begins to crave blood, but only the blood of fellow drug addicts. Can anyone stop this maniacal gobbler and does anyone want to, since it feeds only on drug addicts?

As the case so boldly claims, Blood Freak is the world’s only turkey monster, anti-drug, pro-Jesus film and of course, that’s good news. Although I was entertained by Blood Freak’s insane antics and hilarious gaffes, I simply don’t think the cinematic world needs another one of its kind, while most would argue it doesn’t even need this one. But I have to disagree, as Blood Freak is a unique and enjoyable movie, with a priceless premise and plenty of laughable moments, though of course, it is still low budget schlock. The actual turkey monster is loads of fun, as is the chuckle inducing path to how it came to be, including copious use of weed, hot chicks, and of course, experimental turkey sandwiches. I know this one will fall flat with most folks, but of those of you into bad cinema, Blood Freak is a true goldmine, one of those special films that simply has to be seen to be believed, its that off the wall. You could complain about the poor production values, cheese laden dialogue, miserable music, and awful narration, but come on, these are the elements that make is so much damn fun to watch. As such, I recommend Blood Freak to all fans of bad movies and since Something Weird has tacked on a handful of great extras, I am left to give this terrific release a big thumbs up.

Blood Freak is presented in a full frame transfer, which seems to be an open matte edition. I had very low expectations on this one, but the image actually comes across well and looks much better than I had thought. The print has frequent nicks and debris, but nothing too serious and grain isn’t much of an issue either, a nice looking print, all things considered. The image is on the soft side, but I doubt anyone will be too critical here, since this is a low profile, low budget movie that few have even heard of, let alone seen. The colors and contrast are in solid, more than reasonable form and in the end, this is an acceptable visual presentation.

A movie with a turkey monster might sound like an audio explosion, but come on, this is a low budget picture with some years on it. There’s not much to discuss here, as the audio is basic, but seems up to the task. The low budget origins here are obvious, as range and dynamics are very limited, but such is to be expected in cases like this one. The dialogue is a little muffled and the overall experience is less than impressive, but again, with this kind of material, you can’t expect miracles. So no, this is not a superb audio effort, but I don’t think fans will be too let down, under the circumstances.

This disc includes the film’s theatrical trailer, but also houses a wealth of related supplements that are fun to peruse. The Walls Have Eyes is a short film that stars Steven Hawkes (who plays the turkey monster in the movie) and is a real hoot, running just under half an hour and well worth a look or two. A number of additional short subjects are also found here, such as Brad Grinter: Nudist, Narcotics: Pit of Desire, Beggar at the Gates, Turkeys in the Wild, and A Day of Thanksgiving, quite an eclectic collection, to be sure. And as always, some bonus exploitation artwork can be browsed, complete with music by the Dead Elvi. 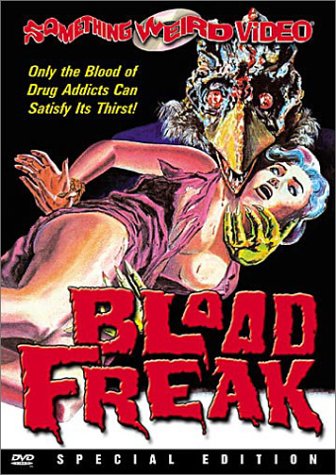