“Crash” is an abnormality. It’s an ensemble piece in a movie-world where remakes abound and it’s the only movie nominated for Best Picture that came out in the *gasp* Spring! It is also no secret that this movie strongly parallels Paul Thomas Anderson’s “Magnolia”, though the characters there were more family-oriented. Director Paul Haggis, who also wrote last year’s Best Picture winner – “Million Dollar Baby”, has crafted something that’s not too typical but yet something that everyone should see. Now I may go off on a few rants and try to sound a lot smarter than I really am, but the issue of racism abounds in every facet of life and it’s personified in its entirety in “Crash”. The film stars a veritable “who’s who” of Hollywood talent. Terrance Howard (himself a nominee for “Hustle & Flow”), Matt Dillon, Sandra Bullock, Don Cheadle, Brendan Frasier and Ryan Phillippe round out what has got to be one of the better casts since “Ocean’s Eleven”.

The movie opens as if we’ve missed the first fifteen minutes of it. We meet some of the major characters as they go about their business. Graham (Don Cheadle) is a cop investigating a murder whose story intersects Hanson (Ryan Phillippe) and Ryan (Matt Dillon) all of which are police officers. All are racists, though to varying degrees. We see Officer Ryan as he pulls over a couple that he thinks is up to no good (sexual acts in a car) but he pulls them over because he believes the woman (Thandie Newton) to be white and the man she’s with (Terrance Howard) is black. He humiliates her, only to return home to his sickly father. There are two gang-type members, (Ludacris and Larenz Tate) who talk of racism and the inborn prejudice against them only to then carjack the District Attorney’s (Brendan Frasier) car and scare his wife (Sandra Bullock).

The truth is that the complex web that “Crash” weaves is only the means in which to tell the story. The underlying theme of the movie is racism, obviously, and how different people of different races all have their perceptions of what’s right and what’s wrong. The sad truth of the movie is that it tells the truth. Racism exists is more prevalent than we’d like to acknowledge. Admittedly, I harbor some of these same traits even though I was raised by good parents and come from a nice home. When driving through a bad neighborhood, I’d lock my door. Sorry, but I would. I’d be more aware of my surroundings and possessions if a repairman of a different race was in my house. It’s not that I assume everyone else is a thief, but that’s how most all of us are to a certain degree.

“Crash”, like any good movie, exhibits a reaction out of the viewer and be it positive or negative – it makes you think. This defines a good movie. The characters in the movie aren’t all likeable; they’re driven by rage and circumstance and make judgments based upon what their senses tell them as opposed as to what their mind should tell them. The tapestry of characters is the perfect setting for the movie and even in multi-cultural Los Angeles, we can see that prejudice is alive and well. “Crash” will polarize viewers but it’s in a good way. It’s not an easy movie to watch, but should be seen by anyone and everyone.

“Crash” is presented in a 2.35:1 anamorphic ratio that looks great in some scenes and looks awful in others. I’m not sure if this was the director’s vision to give some scenes a gritty look and feel and to make others seem polished or if it’s just not up to the usual standards that other studios have set. Nevertheless, it’s not a bad transfer just not something I was expecting for a day and date release. Colors are warm and natural and the nighttime scenes do display a bit of artifacting, though nothing too bad. It’s a good transfer, but I was expecting better.

The Dolby Digital 5.1 soundtrack sounds pretty good with its eccentric mix of music and dialogue. There are strong parts of the movie and parts where no sound can be heard at all. Channel separation is good, very clear and though the surrounds aren’t entirely active all the way through – there are a few times when they make their presence known. For the most part, this is a very dialogue-driven movie and the added ambiance of the 5.1 helps with the mood and atmosphere. There’s also a Dolby Surround version should you want to experience less than the 5.1 sound.

I’m almost positive there will be some sort of “Ultimate” Edition in our future, particularly if the movie does well at the Oscars. For the time being we have a disc that’s got a fair share of extras. Haggis gives us a brief introduction to the DVD and his commentary track with Don Cheadle and Bobby Moresco is very informative. The three make good use of the time and it’s a very lively track. There’s also a featurette: “Crash: Behind the Scenes” with more of the same information and interviews with the ensemble cast. A trailer is also provided. “Crash” is a great movie and though lacking a bit on DVD in terms of supplements, it’s a must see just for the content alone. 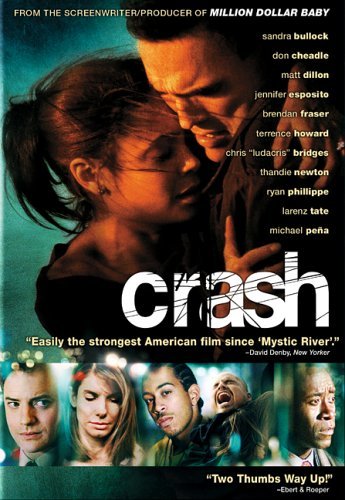