A moonlit boat ride might sound romantic and serene, but for this group of teenagers, the trek will be a horrific one. The teens push off into the ocean in a small rowboat, looking for a memorable night filled with good times, unaware of the terror that awaits them. After a short time on the water, the teens end up near a yacht, but no one seems to be aboard and in a moment of teen foolishness, the kids decide to hop on the ship themselves. The yacht has indeed been abandon, but whoever used to be there left some stuff behind, some very odd stuff indeed. A bizarre laboratory was constructed onboard the craft and it seems like some offbeat experiments were concocted, to say the very least. On this ship filled with potential danger, two of the teens hatch a plan to get makin’ with the love, as primal urges override common sense. As soon as the two start to get frisky, some radioactive plankton emerge and attack them, leaving the guy infected and the chick eaten by her former lover. Now that one of their own has become infected and scores of killer fish are on the loose, can anyone manage to escape with their lives?
áááá
ááááA group of teens venture into an unknown place and encounter horrific findings, seems like a rehashed plot, right? But instead of a slasher or what not, in this movie the kids battle all manner of seafood, which keeps the premise fresh enough. Of course, if fatal fish and lethal lobsters don’t sound interesting, you might not have as much fun with Creatures from the Abyss as I did. As you should well know beforehand, this is not a classic of cinema and never tries to be, but it is wildly entertaining, if this is your kind of flick. I’m sure a lot of folks will find this movie to be hilarious and it is, but I think unlike some humorous horror pictures, the filmmakers knew it would be laughed at and as such, upped the ante on the humor at times. In addition to the laughs, you’ll find Creatures from the Abyss has other elements we horror fanatics love, such as rampant violence, buckets of blood, and of course, some naked female flesh. The gore is rather well done and piled high, so fans of the red stuff will be most pleased. Shriek Show has issued a nice disc here and since this movie has been tough to track down, it’s a notable release in my book. This might not be a great movie, but it is loads of fun to watch and well worth a look, so long as you avoid the robster craws. What the fuck is a robster craw?

Creatures from the Abyss is presented in a 1.85:1 anamorphic widescreen transfer. I had very low expectations here, but Shriek Show has issued a fine looking presentation and surpassed even my most hopeful thoughts. The print used shows some grain and marks at times, but is usually very clean and sharp, quite impressive work. The colors and contrast sometimes waver, but remain stable at all times and always look acceptable. The image is a shade soft, but for a movie that was hard to find outside of a workprint, I’d say this transfer is a real gem, especially since Shriek Show took the incentive to make it anamorphic.

The audio here is not too noteworthy, but it is acceptable and never dips below the standard expectations, so I have no real complaints. The English language version is used and while the lip synch is sometimes off, it only adds to the film’s entertainment value and makes the hilarious lines that much funnier. The dialogue is delivered by terrible actors, but is clean enough to make out and giggle at, which is what counts. In the same line, the almost pornlike soundtrack and various sound effects also come through well, so fans should be satisfied here.

This disc includes direct access to the film’s most horrific scenes, some still photos, and a brief interview with the director. 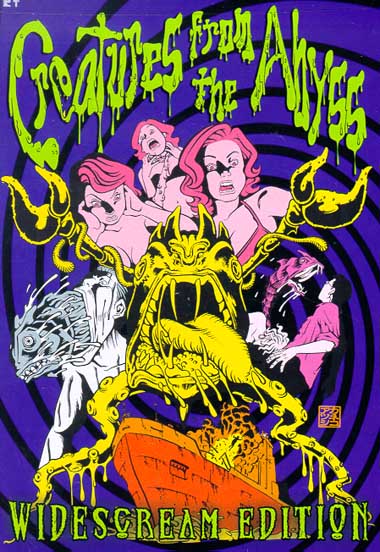