We first saw previews for this movie last Summer (Summer of 1999). What a lot of us didn’t know was that it was a remake of a 25 year old film of the same name. Not only was it yet another Jerry Bruckheimer, testoserone-fueled action movie starring Nicholas Cage, it was a remake of another testosernoe-fueled movie. But so what. Odds are that if you’re a fan of Bruckheimer-produced movies like “Top Gun”, “Bad Boys”, “The Rock”, “Con Air” and “Crimson Tide” just to name a few, then you’ll find this one right up your alley as well. As for me, well, I don’t really know what to make of Angelina Jolie, her off screen presence is annoying and irritating to me, yet I have to admit that she is a very talented actress. Nicholas Cage always delivers a strong performance as well, and I think that he’s one of the best, if not the best leading action man we have. So what does a remake of a semi-successful movie about stealing cars have to offer in the Summer of 2000? True, it does have an ensemble cast featuring Giovanni Ribisi, Robert Duvall, Scott Caan, Angelina Jolie, Will Patton, Delroy Lindo and Nicholas Cage…but does it deliver and in the end will you really feel like you’ve got your money’s worth?

Yes. Cage plays ex-car thier Randall “Memphis” Raines. Memphis was the best at what he did and only quit for one reason–his mother asked him to. Memphis’ mother, a watiress at a diner, didn’t want to see his younger brother Kip (Giovanni Ribisi) get caught up in the same racket that his older brother did. So, for the sake of family, Memphis gave up what he had known his entire life to try and salvage his brother’s future. Now, it doesn’t go into too much detail about this, it’s just mentioned in passing, but it’s a major point in the movie. However, as fate would have it, Kip ends up stealing cars for a living anyway. Toghether with a “new age” band of car thieves, they get into more than they can handle and need Memphis’ help to escape with Kip’s life. So the plan is simple…Memphis must now assume the job that his younger brother failed to do. He has four days to steal 50 cars (from a list) or else his brother dies. Now this is where the movie really takes off, the whole rest of the movie is like the very end of any “A-Team” episode, where the “whole plan is coming together”. Sounds corny, but it’s the best analogy I could think of. The two styles of the car theives don’t exactly mesh well, as Memphis’ crew is more of the “old school” using rubber gloves and slim jims to as their tools, whereas Kip’s crew hacks into the DMV and uses fake fingerprints to cover their tracks.

What’s also important is that they all have a great respect for the cars, they do it for the money, sure. But they also do it for the sheer thrill of it. In a very minor subplot, a certain 1967 Shelby 500 GT Mustang named “Eleanor” (all the cars are coded after women’s names, as they sound less conspicous over the airwaves) has been the Achilies Heel for Memphis. He has never successfully stolen the car and not got caught. But hey…Now stealing 50 cars in one night is hard enough, but ever since Memphis has been back in town he has been hounded by two detectives who remember him from his glory days. Officers Castlebeck (Delroy Lindo) and Drycoff (Timothy Olyphant) are on to Memphis and know something’s going down, but they manage to always stay one step behind. All in all, Gone in 60 Seconds isn’t your average movie. I really liked it as I thought I would originally hate it. It seemed overhyped and received very bad reviews upon it’s release. So in my own way, I guess I’m trying to help the film out. Disney has packed this full of some pretty intersting supplements as well, so it’s worth your while to check this film out. Fans of other Bruckheimer movies will find it a very pleasing ride (please pardon the pun).

The video presentation for Gone in 60 Seconds is top notch. The anamorphically enhanced 2.35:1 image is clean, clear and free of any compression errors. While the majority of the action and movie takes place at night (only fools steal 50 cars in broad daylight), the image doesn’t suffer in the least. Disney has done a compelete turnaround when it comes to their titles, and what once a disappointment when a title came out, it’s now a pleasure to see how splendid they all look. Nothing really much more to say here…perfect.

With several scenes that rival the car chases from “Bullitt” and “The French Connection”, Gone in 60 Seconds really makes use of all your speakers. This is the kind of movie that would sound good via your local TV station with your “stereo” TV. The dynamic Dolby Digital 5.1 sound is just as exilirating as the movie is itself, in fact it will draw you into the movie moreso. The split surrounds are used just enough and I’d be lying if I said that a subwoofer made this sound all the better. The most intersting part about the sound, of course, are the car chases. The squealing of the tires and hum of the engine sound positively amazing. I am running out of ways to say how much this soundtrack rocks!

Disney continues to improve upon their commitment to include more extras on thier newer DVD releases and Gone in 60 Seconds is certainly no exception. While this disc may have come out a year ago, I would hate to think what it would be like…maybe it’s “‘Special Features” would be a theatrical trailer. Who knows…Ironically enough the original theatrical trailer is included as are numerous others for other movies as well. Several featurettes are included and while not that lengthy, they end up totatling almost an hour in length. Some of these are “0 to 60” and “Wild Rides” which disucss how some of the actors got into their parts for the car chase scenes. Obviously, there were professional drivers doing the driving, but a few scenes called for the stars to do the actual work. An interview with some 10 stars from the film, writer and director of the film is intersting as well, though the interviews were short and I would have liked to see more. A section is devoted to Jerry Bruckheimer, who tells us what exactly a Producer does (of course, if you’ve seen “Wag the Dog”, you’d know) and how he started in the business. Bruckheimer is very down to earth, as most multi-millionaires are and states that “just someone recommending the film” is all the satisfaction that he needs from a film (yeah…that and a few million will make your day). A few other assorted featurettes are included as well as a music video by The Cult. All in all, it’s not a bad movie and not a bad disc. The audio and video essentials of it alone deserve a viewing. While it’s sure not to get up for any Oscars (other than technical), I recommend it. 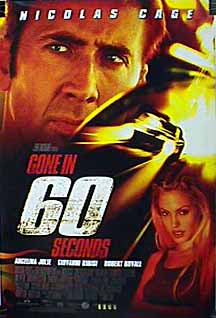