Last year, one of the most surprising things happened to me. I had heard a film that had not been seen in it’s original form would be making it’s way to the big screen for one week only. I took a chance on a film that turned out to be one of the most infamous films in Hollywood history. It came out at the end of one of the biggest eras where more of the personal auteur films were being made and freedom to make a literal movie was a common thing. It cost a lot, it shut a studio down and almost every critic blasted it. It went from the fires of critical hell to the skies knocking on Heaven’s Gate.

A long time ago, James Averill (Kris Kristofferson) and Billy Irvine (John Hurt) were friends in school and a bright future laid ahead for them in friendship and togetherness. Now we are in the present day and James has some authority in Johnson County while Billy, who seemed like the most likely to succeed, got the bad end of the stick when he has a say in what goes on in the county, not that anyone listens. The two are in the middle of what seems to be a war of property. It seems that immigrants that reside there have loads of cattle divided amongst them and now the powers above Averill have investigated the matter and in the effort to make things official and save the county, they have issued a “death list” amongst those who have done so and have issued men, among them sharpshooter Nate Champion (Christopher Walken), to help take them out at fifty dollars a hit. As the war brews and the situation escalates, these three people start to realize the consequences of their actions both positively and negatively.

I always felt that this was after the west was wild and what was left of it if the towns became regular working towns such as the ones portrayed in this film. It’s also referential to note one of the towns is named Sweetwater, the future town ready for construction in Once Upon A Time In The West. From the first credits to the ambiguous ending, Heaven’s Gate is a triumph both visually and instinctually.

Here is a film that was panned all across the board upon it’s release and today almost twenty five years later, it’s a much better film viewed today. It does stretch along and the time goes by at a decent pace and from the looks of the beginning, things may be a bit unbalanced. By the beginning of the second act, we see that the first act was a set-up of things to come and the film’s pace takes a rapid turn from being casual and neutral with some excitement to fast and being at the edge of your seat as well as a bit of a tragic touch.

This is for the most part an ensemble piece and the entire cast stays on the same level when it comes to acting. There is no standout performances, only a few standout scenes for acting and all of the players end up doing a good job for the most part.

Kris Kristofferson plays James Averill as a man with a past that was so happy and is in a present that is so convoluted that he can’t begin to imagine what lies for him in the future. Isabelle Huppert, memorably plays Ella as a strong woman that leaves a good taste in the mouth both literally and figuratively. Christopher Walken plays Nate with a memorable well shot introduction and the audience is not too aware of his purpose in the film until halfway through the first act of what his intentions and his actions are and what it will lead to when the second act comes along. Amusing support comes from Jeff Bridges as the master of entertainment along the town along with Brad Dourif and look out for a young Willem Dafoe in one scene of the film, a true blink and you’ll miss him moment.

With all that was knocked about in the past, in this present Heaven’s Gate is a film who shows a beautifully photographed (by Vilmos Zsigmond) palette filled with browns and beautiful blue skies as well as a look unlike no other courtesy of director Michael Cimino who got a lot of flack for it’s initial release. Seeing this film made this viewer realize that when the smokes clear from any kind of buzz, there can be some light at the end and Heaven’s Gate is just one of a chosen many that can be seen as a film that plays better today than it did then.

MGM/UA gives Heaven’s Gate the anamorphic 2.35:1 widescreen treatment complete with intermission and the original United Artists logo. As for the quality of the film itself, the DVD retains it’s beauty for the most part but with one glaring issue. In many scenes, the cigarette burns that are usually evident in a movie theater during a reel change are still evident on DVD, an issue with older movies that is usually corrected when it comes time for release on DVD or video. There are some speckly scenes in the film but they are few and far between. It still is a great looking picture and the visual flair is still there, if it only wasn’t for those cigarette burns, it would be a 5.0, but in this case it will have to settle for a little less than that. A good transfer.

The Dolby Digital 5.1 surround track has it moments that yo-yo in the first hour or so from good to okay due to the condition of the source material but then after that it becomes a pretty solid track thanks to David Mansfield’s score that gives great use to all channels with it’s touches of original music as well as Mansfield’s own take on a few classical pieces as well. This viewer hasn’t heard the Blue Danube Waltz heard the same after it’s use in this film as it’s used greatly, something this viewer was reminded of in last year’s Collateral. The sound effects and the noise spread across the outer channels with most of the dialogue in the middle channels that can be hard to hear in the first hour but clean itself up in the remainder of the film. Although there is a slight muteness on the track, the result is surprisingly very good. This disc also has French and Spanish Language Subtitles (No Habla Ingles?)

The only extra on this DVD is the film’s theatrical trailer which is in rough shape but interesting to see how the studio tried to market the film.

With this and with the twenty fifth anniversary coming rapidly around, I as well as some other film writers noting this film as a better film today, would welcome another release of this film in a slightly remastered transfer on DVD.
There was a great documentary done for this film recently on cable last year that documented everything beautifully and with a re-release on DVD, it could make for a most excellent extra as well as the multitude of cuts this film had gone through. (To this date, there is the abbreviated cut that was released in 1981, as well as the cut that is here on this DVD that comes the closest to the original length of the picture upon it’s one week release in 1980)

With a revisionist feel, a post gunslinger West, a different feel and a superb limited theatrical run last year along with the reminder of it’s positive effect on this viewer, Heaven’s Gate is one worth going through with a good DVD but one that I hope can be a better DVD sometime in the future. 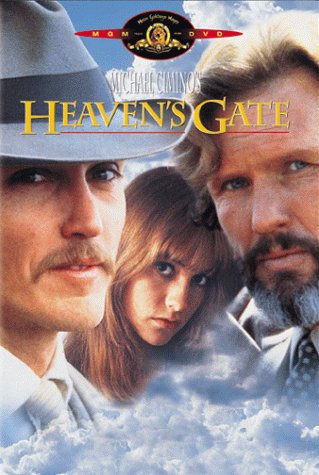