The outback lands of Australia have always been home to some unusual creatures, but never any as strange and dangerous as the most recent inhabitants. It seems a race of marsupial werewolves have taken hold in the area and since they’re so dangerous, the humans have become quite worried, to say the least. How did these bizarre creatures come into existence? You see, a marsupial wolf used to be found in the outback, but it died out over the years and now, a colony of hidden descendants has surfaced. These animals are lethal and cunning however, much more so than any other wolves known to man, that’s for sure. The werewolves have human forms, but possess the speed and senses of the wolves, which makes them hard to escape from, should you find yourself under attack. The humans soon send in a team to control this new species, but when romance blooms under unlikely circumstances, who knows which of the two races will end up in control of the other…

I have to commend Elite Entertainment on this one, as I never thought I would see an edition of Howling III that was this great, not in a million years. But I have this disc in my hands, so it must be real and I think Elite deserves some credit for their care with this title, to be sure. The movie isn’t that good in the traditional sense, but has some humorous moments and in the end, makes a nice addition to any horror collection, if you ask me. If you view it as you would most flicks, it will seem terrible, but you can’t take it seriously, not in the least. This is pretty much a spoof and it shows, as there’s a lot of laughs and that is what makes this flick fun to watch. I wouldn’t recommend Howling III in terms of scares, but it is a blast to watch sometimes and that’s more than enough reason to check it out, at least I think so. The writing is thin at best, the special effects are unimpressive, and the acting is subpar, all of which combine to make Howling III such a bad, but also fun picture. If you’re a fan of offbeat horror and don’t mind bad movies, then give this one a chance, especially in such a wonderful package from Elite Entertainment.

I can’t say that Philippe Mora should be praised to the heavens for his work on this movie, but he does well enough under the circumstances, I think. Mora makes a wise choice when he opts to keep it light in tone and never serious, as a serious approach would have sunk this one even deeper to be sure. His direction is solid given the low budget nature of the picture, but he has minimal resources and that shows, though not as much as you might expect. The special effects could use some work and all, but I think Mora and his crew delivered well enough, considering what they were given to work with in this case. Other films directed by Mora include The Beast Within, Art Deco Detective, Communion, Joseph’s Gift, and of course, Howling II. The cast here includes Imogen Annesley (Strapless, Sweet Talker), Deby Wightman as Wolf Woman, Barry Otto (Dead Letter Office, The Punisher), and Max Fairchild (The Blood of Heroes, The Road Warrior).

Howling III: The Marsupials is presented in a 1.85:1 anamorphic widescreen transfer. I figured on a good looking transfer, but this is even better than expected, especially given the time period in which it was made. These ’80s horror flicks don’t often age well, but Howling III looks terrific here and fans will be thrilled. The print used is clean as a whistle and I saw minimal grain, which means the other elements are given more room, which they take advantage of and then some. The colors look brighter than ever, contrast is smooth and stark at all times, and the flesh tones remain natural from start to finish. This is simply the best visual presentation fans could have hoped for and as such, I commend Elite for their work here, kudos indeed.

I was pleased to find a new Dolby Digital 5.1 track has been included, which adds a lot to the film’s overall presentation. This movie doesn’t offer as much audio potential as a more action driven picture, but the surrounds won’t be silent either. The sound effects and music come through very well, but since this isn’t an audio driven film in that sense, don’t expect to be blown away, by any means. No problems with the dialogue either, as the vocals seem crisp and at always at a proper volume, very good work here.

This disc includes a selection of still photos, a television spot, and the film’s promotional trailer. But the main draw in this release is an audio commentary with director Philippe Mora, who offers his thoughts on Howling III. I was very taken by this session, as Mora is quite open and reveals a lot about the production, both good and bad. He touches on many topics and seems very relaxed, if only all commentary tracks were this smooth and informative. 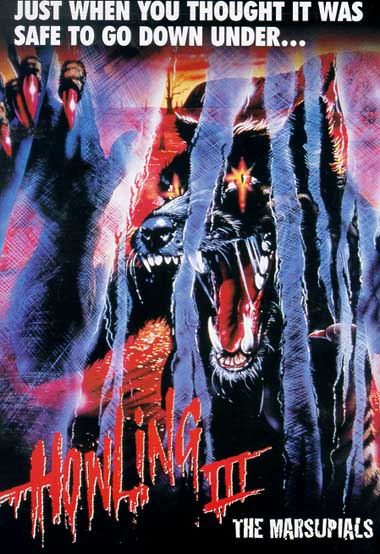