The legend of The Chosen One is well known, but until he was born, no one was certain if the legend was true or simply a hopeful wish. The Chosen One (Steve Oedekerk) was born in a humble shack and even as an infant, he was under constant attack. His newborn martial arts skills carried him past two attackers while still in his crib, until he could be rolled down a rock infested mountain and then taken in by some kind rodents. After he was raised by the rodents, his skills in kung fu had advanced to elite levels, which is good, since he was always having to battle attackers, sometimes dozens at one time. His mind is on revenge however, as he seeks to settle the score with Master Pain, the nefarious martial arts master who tried to murder him as a newborn. His journey will not be an easy one, but The Chosen One has prepared himself and will do whatever it takes to have his vengeance. He must face down countless foes, battle with a kung fu bovine, learn from the wisdom of a new teacher, balance his feelings for a woman, and then somehow defeat Master Pain, a man who has never been beaten. No, the path is not simple, but if anyone can overcome such impossible odds, it is The Chosen One.

I wanted to love Kung Pow and in truth, I went into the theater fully expecting to have a lot of fun and tons of laughs. I mean, I am a big time old school kung fu cinema fan and I have a great sense of humor, so I looked forward to the jabs found in this picture. I know some were upset and felt like director Steve Oedekerk was making fun of the genre too much, but most of the stuff seemed based on the dubbing used, which is not part of the original movies. So in short, I was excited about Kung Pow and couldn’t wait to check it out in theaters. After I’d seen the movie, I have to admit I was let down, but I still had a good amount of laughs. Oedekerk worked some cool magic blending the films together, but it just lacked the sheer hilarity I had expected. But I did enjoy Kung Pow, as I think any old school kung fu fan would, as it includes a wealth of inside jokes, some quite subtle, that non genre fans could miss. The special effects work is a little weak, but that seems to be intentional and rest assured, it never slows down the action. I mean, the fight sequence with Oedekerk versus the martial arts cow is worth the price of admission by itself.

In order to bring Kung Pow to life, Oedekerk used an unusual approach, one that to my knowledge, hasn’t been to this extent before this project. Instead of just shooting a complete film and putting it together in the usual method, Oedekerk went back to an old school kung fu picture titled Tiger and Crane Fist and used some modern magic to add some bells & whistles. Oedekerk took some of the existing footage, had himself imposed into the main character’s scenes, then removed the original soundtrack to allow him to insert his own dialogue, music, and sound effects. Then new scenes were shot, including some with hilarious special effects work and before you know it, Kung Pow: Enter the Fist is a standalone motion picture. Of course, Oedekerk has played up all the old school kung fu cliches to the fullest extent, with outlandish sound effects, bad voice dubs, and wild fight sequences that defy the normal limits of our realm. Oedekerk’s idea here is a good one and provides some solid entertainment, but I do hope no one follows in this same path, as one film of this kind is enough. I do recommend Kung Pow to genre fans however, as it has a lot of fun sequences and Fox’s disc is excellent, so don’t hesitate to pick this one up.

Kung Pow: Enter the Fist is presented in a 2.35:1 anamorphic widescreen transfer. As this is supposed to seem like an old school movie, even the newly created scenes look worn, but that is intentional, so no worries there. The print is clean enough to ward off complaints, but battered a little to make it seem older than it is, which helps with the experience. The old footage is more tattered and worn, but that’s expected, without question. The colors and contrast look good here, though as I mentioned, some scenes look better than others, due to the visual approach involved. I know some will be disappointed with this transfer, but some touches were made to gain a specific look, which I think is well replicated in this visual presentation.

A solid Dolby Digital 5.1 track is found here, which offers a wide range of kung fu audio, but never sparks all that much. The insane, often hilarious sound effects come through well and in the more action oriented scenes, we’re given some nice surround presence. Not the kind of audio you’d want to write home about, but I do think the track is better than I expected, as it offers some good surround use and decent atmosphere. The crackpot dialogue is clean and crisp, while the music is rich and makes good use of the rear channels, an above average audio treatment. This disc also includes language options in French and Spanish, as well as subtitles in English and Spanish, should you need those.

A trio of alternate audio tracks headline the supplements, including the very first “book on tape” audio option on DVD. Yes, the epic tale of The Chosen One is now read by some British gent, who brings additional class and humor to the material. This is a great idea and while some might dismiss it as a mere novelty, I found it be to be a worthwhile inclusion. The second track gives us the original audio, so most of the actors speak Cantonese and some speak English, though the English speakers don’t say the same things as the final dub does. It is hilarious to find out what Oedekerk and his costars were really saying, especially the scene in which The Chosen One reveals his true self to the school’s leader. The third track is an audio commentary with Steve Oedekerk and editor Paul Marshal, who discuss all sorts of production issues. As always, Oedekerk adds humor to his comments, but he also provides some real insight and reveals his love for old school kung fu, making for a terrific overall session. You can also browse six alternate takes, some of which are quite humorous, as well as a total of fourteen deleted sequences, also well worth a look. This disc also includes before & after visual effects comparisons, a brief behind the scenes featurette, cow animatic, and the film’s theatrical trailer. 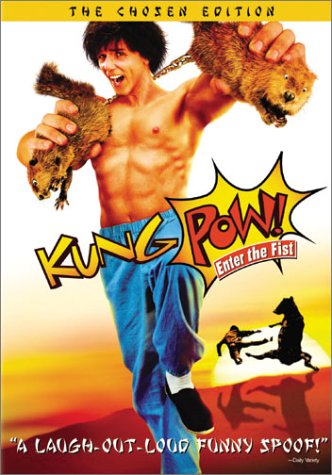