Les Anderson (Corey Haim) is on the brink of the most important moment of his young life, a moment that could open countless doors, or slam them in his face. He is of course, about to take his driver’s test and if he is able to pass, he is sure he can make his dreams come true. Once he can drive on his own, he can take out the most beautiful girl in school, Mercedes (Heather Graham). His hopes are high, but despite his best efforts, he fails the test and his dreams seem to have been dashed. But then inspiration strikes and he decides to keep his failure a secret and forge on with his date, despite the possible consequences. So he flashes an indentification card as fast as he can when people ask to see the license, borrows his family’s car, and sets out for a night with the woman of his dreams. But when chaos is unleashed and Les finds himself in disaster after disaster, will he ever be able to drive again?

If you’re a fan of 80s teen cinema, then one of the holy grails have been uncovered, thanks to Anchor Bay’s release of License to Drive. This is a movie that fans have been after since we first started buying these shiny little discs, but the wait has been extensive. But thanks to Anchor Bay, we not only have this 80s epic, we also have License to Drive in a respectable presentation. Other studios probably would have recycled a transfer and rushed out the disc, but not this one. The movie itself is no classic, at least not by traditional standards, but in the realm of 80s teen cinema, License to Drive is held in high regard. But this movie doesn’t have as much 80s style as you might think, though the decade’s influence is obvious. Although released in 1988, License to Drive has a 90s feel, in terms of clothes, dialect, and general cultural presence. Not all 80s and not all 90s however, the movie walks a fine line and in truth, comes out with the best of both worlds. The movie has a lot of laughs and for children of the 80s, holds immense nostalgic value. Anchor Bay’s treatment is all fans could want and then some, so License to Drive is highly recommended.

License to Drive is presented in 1.85:1 anamorphic widescreen. As per usual, Anchor Bay is able to deliver a superb visual presentation and even though this is a catalog title over a decade old, there is little room for complaints. The print looks clean and shows minimal defects, which is good news and while age has softened the visuals a little, the image still come across as quite sharp and never disappoints. I found colors to be bright and without error, while flesh tones look natural throughout also. No problems with contrast either, as black levels are refined and well balanced without exception. This is a terrific looking visual presentation and fans should be thrilled, without a doubt.

A new Dolby Digital 5.1 soundtrack has been created for this release and while welcome, the new audio isn’t that dynamic. Of course, the main improvement is with the musical soundtrack, as the smash 80s tunes have more juice than ever. So if nothing else, the music sounds ten times more impressive and in a movie like this one, that can be quite a boost. The surround presence is mild, but does peak at times and when that happens, the presence is natural, not forced. No worries with the vocals either, as all the dialogue is clean and crisp, just as we’d want it to be. This disc also includes a 2.0 surround option, should that soundtrack better suit your home theater needs.

An audio commentary track is up first, as director Greg Beeman and writer Neil Tolkin talk about the movie and how it was made. I have to be honest, this wasn’t the best track I’ve heard, but some worthwhile tidbits can pulled out in some places. The two discuss how the project began and relay some production experiences, then talk a lot about the cast members. This disc wouldn’t have been complete without interview with Feldman and Haim, so those can be found here also. Not the most insightful pieces, but the Coreys are always fun to listen to, especially when they talk about the salad days. This disc also includes some television spots, a deleted scene, and the film’s theatrical trailer. 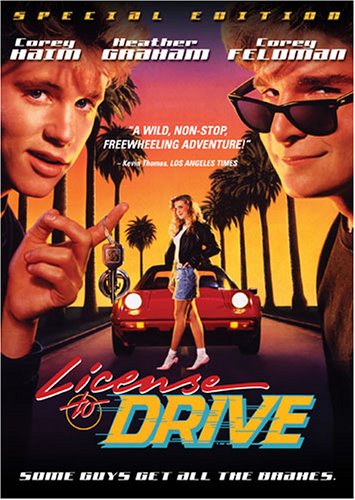