As the 1968 Democratic National Convention rolls forward in Chicago, the streets become overrun with protests, violence, and at times, utter chaos. The city has been having problems with political issues, racial tension, and all sorts of other troubles, all of which will soon come to a head with serious consequences. John Casselis (Robert Forster) has found himself in the midst of the uproar, with his camera in hand and as each moment passes, he seems to be pulled deeper and deeper into the chaos. He is the toughest cameraperson in the business, he is an expert on the issues involved in this mess, and he knows how to get his images, but in all of this, even he is unsure of what to expect at times. But before he was in Chicago, he did normal news work and soon discovered his network used his tapes in exchanges with the F.B.I., so he left his job there and headed off to the convention. As tensions continue to mount and violence begins to erupt, can even Casselis keep his cool, survive the chaos, and capture it all on tape?

I’d read a lot of positive reviews on Medium Cool and as such, I checked it out as soon as possible, only to be somewhat let down. I guess the whole part reality, part fiction never sparked with me, as I found Medium Cool to be a decent picture, but nothing more. Now that Paramount has released the film on DVD however, I decided to go back and see if it would be better this time around, which it was, at least to an extent. I still don’t find this to be a masterpiece or even effective in delivering a real message, but then again, I might not the kind of person Medium Cool is aimed at, so who knows. I think most of the effective scenes involve real events with actors involved, which sort of cheapens the flick in my eyes, since the real life events were just used to enhance an otherwise mediocre picture. I enjoy documentary films and normal motion pictures, but the two worlds are never combined to effective ends here, in my opinion. Robert Forster (Jackie Brown) gives a solid performance, but the rest of the cast is anemic and without much good outside of the reality based scenes, I am stuck recommending this one as a rental.

Medium Cool is presented in a 1.85:1 anamorphic widescreen transfer. I was quite stunned by the image level here, as Paramount has done some terrific work and if I didn’t know better, I would have no idea this movie was over three decades old. The print looks clean and shows minimal wear, though the documentary style approach does hinder things, but that is the idea here and as such, no complaints there. The colors and contrast look a little off, but that is also part of the documentary style and since the elements look more than acceptable, I see no reason to raise much of a fuss. A very nice treatment here from Paramount, who either found some very well cared for materials, or chose to invest in some restoration work, as this transfer is excellent.

A mono option is used and is more than adequate, given the nature of the movie and the documentary style approach used. The audio is rather basic and bland for the most part, but the music keeps things alive and plays a large role in the audio scheme here. The music is about as expansive as mono allows, while dialogue and sound effects are acceptable, but never become too memorable. In the end, the audio is well presented and while not too impressive, all the bases seem to have been covered with this track. This disc also includes English subtitles, should you need to enable those as you watch.

This disc includes the film’s theatrical trailer, as well as an audio commentary track with director Haskell Wexler, consultant Paul Golding, and star Marianna Hill. This track is most welcome indeed, as Wexler reveals how much of Medium Cool is real and how much is movie magic, as well as how thin the line was at times. This is one of the better, more candid & honest sessions I’ve heard of late, so fans will not want to miss the track. 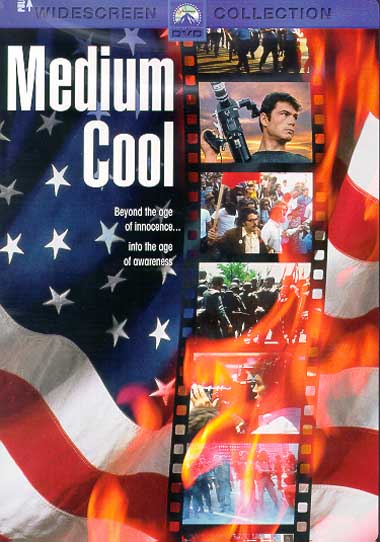