A documentary crew is dispatched to observe the goings on inside a small paper merchant, to show the office environment to the viewers at home. The branch manager is David Brent (Ricky Gervais), a man who fancies himself a true leader, a role model, and above all else, a comedic genius. Brent loves the cameras, but the same can’t be said for the rest of the office’s workers. While Brent plays to the camera, the others just want to get their work done and have a little fun once in a while. Gareth is Brent’s right hand man and a prize lackey, Tim hates his job, but loves to daydream about receptionist Dawn, who is engaged to a warehouse worker. As the clock ticks, these people work and socialize, all captured on camera. As we know, The Office isn’t a real documentary series, but it looks real, sounds real, and above all else, feels real. The show uses all of the genre conventions to make the most out of the dull, soul crushing office atmosphere.

The Office is a masterpiece of television, a series that has universal appeal, incredible comedic depth, and characters you can’t help but connect with. While the American remake is content to be slapstick and outlandish, the original crafts a believable world populated with people we can relate to. Chances are you’ve worked with people similar to the ones in The Office, or you’ll at least pick up on subtle elements that remind you of someone. David Brent is an instant comedy icon, played to absolute perfect by Ricky Gervais. His performance is the driving force of The Office, but he is also surrounded by a supporting cast loaded with talent and cast into ideal roles. The Tim and Dawn arc is pitch perfect, the smaller roles shine when given the chance, and Gareth steals his fair share of scenes. The Office just seems to have been filled with just the right people on camera, while the creative side was given the freedom to materialize their vision. I don’t often revisit shows, but I have watched The Office countless times and it never fails to entertain me. This Special Edition has the entire series and some new supplements, so for fans of The Office, this new version is highly recommended.

The episodes are presented in 1.78:1 anamorphic widescreen. The episodes look great here, clean and clear with no errors to report. The show has a specific look, so as to look like a documentary, so that is reflected. In other words, the visuals look hand held and can be inconsistent, but that is part of the vision. So The Office looks quite good in this presentation and the visual design comes off just as intended.

The show’s documentary approach means the audio is driven by dialogue and little else. The theme music spices things up a little and of course, David Brent’s serenades add some life, but overall this is all about the vocals. The dialogue is clear and never suffers from harshness or volume concerns. This is great news, as the is the kind of show where you don’t want to miss even a single line, it is that good.

The cast and crew provide introductions to the first series episodes, while extended versions of those interviews can be viewed here as well. You can also listen to audio comments on the second part of the Christmas Special, or watch two behind the scenes featurettes on The Office’s creation process. This release also includes some deleted scenes, the original pilot, a Golden Globes featurette, Ricky Gervais and Stephen Merchant’s video diary, extended outtakes, a music video, and of course, the making of Freelove Freeway, which we all love. 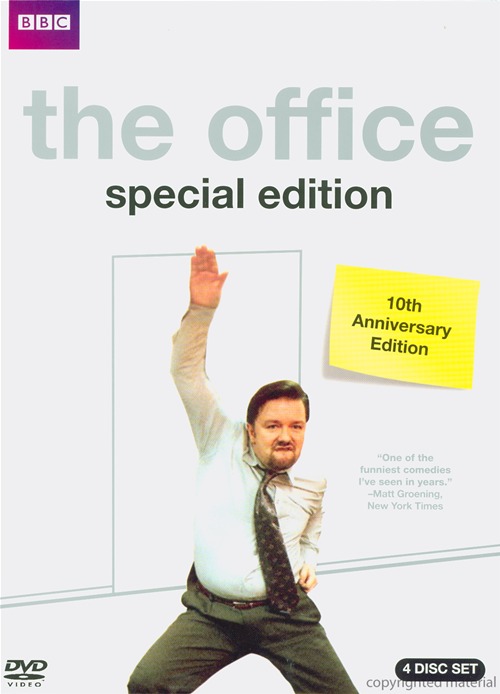