As the end of 2007 approached, World Wrestling Entertainment put on the final pay-per-view of the year, as Armageddon unfolded in the squared circle. A total of four championships would be on the line, plus several other matches, but the main event would be Randy Orton vs. Chris Jericho for the WWE Championship. Jericho’s return had been much anticipated, but could he rise to the occasion so soon, or would Orton retain his gold? The World Heavyweight Championship was also up for grabs, in a triple threat match with Batista, Undertaker, and Edge. Jeff Hardy lines up against Triple H with a title shot on the line, while Shawn Michaels and Mr. Kennedy also did battle. One of the most interesting contests would pit MVP against Rey Mysterio in a United States Championship match, but the entire card is stacked for Armageddon.

The event is presented in full frame, as intended. As usual, this show looks quite good and even on a 65″ screen, holds up well. This is a three hour program, so I wasn’t surprised to see some minor compression problems. These were minor and infrequent however, so no reason for concern. The image is clean and has solid sharpness, so detail is high in most instances. The colorful attire and pyrotechnics look vivid and pop right off the screen. I saw no issues with contrast either, as lighting is on the mark and no detail is obscured in the shadows. So while a few minor issues do surface, by and large this event looks terrific and fans should love taking in the sights here.

The included Dolby Digital 5.1 surround soundtrack is very impressive, with a good range and enough power to make you feel every impact. The entrance music and pyrotechnics sound great here, so the atmosphere is immersive when the superstars walk down the aisle. The crowd is loud, but varies in volume, as should be expected from a live audience, of course. As far as the action inside the squared circle, the stiff clotheslines sound crisp, the powerful slams are well handled, and you can hear all the smack talk you can handle. You can choose between the English or Spanish broadcast teams, which is a welcome touch.

The lone extra is a clip from Raw in which Mr. McMahon announces the greatest superstar in Raw history. Not that great, but I’d rather have this than no supplements whatsoever. 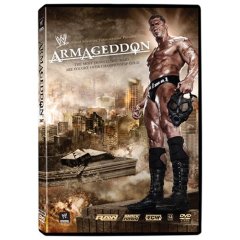