Now that the WWE has dropped the brand exclusive pay-per-views, it seems like every card is a stacked one. The Great American Bash has a storied tradition for decades, so of course it should have a stacked card. This 2007 installment of the Bash does indeed have a stacked card, one that features talent from all three brands, Raw, Smackdown, and ECW. The show was headlined by a first time clash between two of WWE’s biggest titans, Bobby Lashley and John Cena, with the WWE Championship on the line. Would Cena’s big match experience be able to fend off Lashley’s youth and hunger for the gold? A bitter feud was also set to be settled, as “The Legend Killer” Randy Orton took on wrestling legend Dusty Rhodes, in a Texas Bull Rope Match. I can’t forget to mention the World Heavyweight Championship match either, as three mammoths clashed over the belt, with The Great Khali defending against both Batista and Kane. But that’s not all, as more championships were defended and some of the world’s most talented grapplers did battle. Below is a list of the matches on this show.

2. The Great Khali vs. Batista vs. Kane (World Heavyweight Championship)

The show is presented in full frame, as intended. This looks great, even better than broadcast on pay-per-view. The image is bright and clean, with the only real trouble being a few compression errors here and there. The in-ring action is well lit and the pyrotechnics really shine, thanks to WWE’s usual high end production values. I saw no issues with color or contrast here, this is a great looking show and fans should be more than satisfied.

The included Dolby Digital 5.1 surround soundtrack is very impressive, with a good range and enough power to make you feel every impact. The entrance music and pyrotechnics sound great here, so the atmosphere is immersive when the superstars walk down the aisle. The crowd is loud, but varies in volume, as should be expected from a live audience, of course. As far as the action inside the squared circle, the stiff clotheslines sound crisp, the powerful slams are well handled, and you can hear all the smack talk you can handle. On commentary, everyone sounds clear as a bell, so no complaints here. 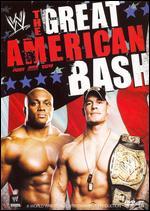