Do you like superhero movies? I mean, do you really like them? Do you dream of the Avengers or the Infinity Gauntlet? Do you stand on the edge of tall buildings looking up at the nighttime sky? Ok, the point has been made. And I’m going somewhere with this. Back in the late 90’s there weren’t that many comic book movies. And what little there were, weren’t…good. They were cheesy and were made specifically for readers of comic books. Don’t believe me? Check out the 1990 version of Captain America and then watch the 2009 version. Point made. Thankfully we have Wesley Snipes. Snipes wanted to do a big budget superhero movie. Actually he wanted to do Black Panther. But there’d be a wait on that one. So it was deemed that Blade would be made. A fast, action-packed R-rated movie that wasn’t afraid to shed some blood. And blood was shed. Blade was born half-vampire/half human and had all the strengths of vampires and none of their weaknesses. This is his story.

We meet Blade (Wesley Snipes) as a daywalking vampire who hunts his own kind. As previously mentioned, he possesses all of the strengths of a vampire, but none of their weaknesses (except for their lust for blood). His mother was killed when he was born and, as such, Blade has gone through life resenting that. After saving Dr. Karen Jensen (N’Bushe Wright), he and sidekick Whistler (Kris Kristofferson) attempt to save her. All the while Deacon Frost (Stephen Dorff) ha hatched a plan to use an ancient ritual to allow him and his vampire buddies transform into vampire gods. And they need Blade’s blood to complete the ritual. Blade and Karen are the only ones who stand in his way.

Simple enough, right? And that’s what made and still makes Blade fun to watch. Yes, it’s far from perfect and some of the one-liners are a bit trite nowadays, but it’s still all in good fun. Or as much fun as a vampire cuts off the heads of other vampires with a sword. Screenwriter David S. Goyer is no stranger to the comic book movie. He’d go onto write the Christopher Nolan Batman trilogy as well as a few other DCU titles. Suffice it to say, he found a niche and most likely isn’t going anywhere anytime soon. Still, to think, what if this hadn’t been such a hit? We’d have never been treated to future Marvel movies and we wouldn’t have seen the best installment in the Blade franchise with Blade: Trinity. Does Ryan Reynolds get any better than he was there? No. No he doesn’t. No matter what your opinion on the superhero flick, this one is required viewing.

Seeing older films in 4K is somewhat of a double-edged sword (pun specifically intended). In one respect, we get to see what these films look like with the advances in modern technology. Seeing a movie over and over with grain and artifacting is one thing and then seeing it after a restoration literally breathes new life into a film. Such is the case with Blade. It was one of the early big budget films to come to the (then) new DVD format as part of New Line’s Platinum Series. It looked amazing. But that’s been over two decades and a lot has changed. The new 4K version pulls no punches. The film is dark and the new transfer holds up remarkably well. Black levels are strong and consistent, detail has been improved a bit and whatever grain there was is no longer an issue. I’ve heard/read that there might have been a bit too much DNR, but nothing that really bothered me. About the only downfall of the film is that with this increased resolution, we can now see (with a bit more clarity) how antiquated the CGI effects are. But no matter – fans of Blade will enjoy this one.

There’s a scene in the film where the characters are out in the street. A wind kicks up and starts blowing some paper around. I turned my head around. Yes, I turned my head around over the sound of a piece of paper blowing in the wind. If that’s any indication of how amazingly good this sounds, then you’re in for a real treat. And yes, by the way, it is an indication of the sound. A new Dolby Atmos mix was created for this release and it pulls no punches (again, sorry about the puns…I’m on a roll). Atmospheric sounds bounce off every wall in the room. Vocals, particularly those of Wesley Snipes, are spon on terrific. The front stage is always humming and the surrounds have very little time to rest. It’s an immersing and amazing mix that’s sure to please.

Disc Two (Blu-ray) – This is the same disc/features that were included on the previously-released Blu-ray.

If Blade had bombed, we probably wouldn’t have had an X-Men or Spider-Man or any of the MCU or DCU movies. I’m willing to bet that depending on your point of view on comic book movies, that’s either good or bad. Then again if you’re reading this, I’ll assume you’re a fan. Suffice it to say that the new 4K version of this film is the best it’s ever looked and sounded. The inclusion of no new supplements is a bit disappointing, but on technical merits alone – it rocks. 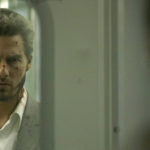 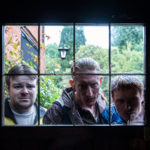