Imagine, if you will, a world in which Dwayne “The Rock” Johnson had hair. I know, I know…it’s difficult. But let’s at least try. You’re essentially going back in time about ten years. Is the image coming to you yet? If not, give it time – it will. If you don’t want to play that game, let’s take a trip back to the early 2000’s. This is when The Rock wasn’t in every movie spinoff, but was a rather unknown actor. He had a small part in The Mummy Returns where he played, you guessed it, The Scorpion King and thus led to his first starring role. Well, let me backtrack a bit. His first starring role was in 2000’s Beyond the Mat – a documentary about professional wrestling. Johnson, a former football star at the University of Miami, really made a name for himself as a wrestler back in the 90’s. The more you know. It’s an odd, twisted path for the man who’s literally everywhere nowadays. And it might be said that his rise to superstardom began with this movie.

Taking place 5,000 years ago we meet a warlord named Memnon (Steven Brand) as he’s pillaging his way across the desert and kills anyone who stands in his way of his quest for power. Many try and stop him, but he’s guided by a seer named Cassandra (Kelly Hu). Cassandra advises him on various battle strategies which seem to be working. In a last ditch effort to gain control the tribes (the ones who are trying to stop Memnon) call upon Mathayus (aka “The Scorpion King” played by Johnson). He enters the city of Gomorrah where the two titans will battle it out with only one standing in the end.

Obviously there was a little something missing from The Scorpion King and at a scant 88 minutes, didn’t have the plot or character development to really hold its own like the previous Mummy movies. The Rock’s performance isn’t all that bad, however the paper thin characters and somewhat lackluster plot made it easy to assume why this wasn’t really a success at the box office. Still if you clamor for the days when we still thought these movies were cool, then knock yourself out. Universal has chosen to release this on the 4K format and, for what it’s worth (in the guilty pleasure department) it’s not half bad.

As with the two previous Mummy movies, The Scorpion King shares a lot in common with them in terms of how they look. Namely we get the same earthy tones that have a preponderance of browns and oranges, though this one is a bit darker in my opinion. The 2.35:1 HEVC 4K transfer is certainly on par with the other films and though not perfect, it does make for a quality presentation. I found little to comment about on the physical look of the film, the source seems clean and vibrant and only in a few pieces (namely towards the end) did I see any fault in the transfer. A few of the scenes seemed to be a bit grainy, but aside from that The Scorpion King looks pretty darn good.

The new DTS X audio mix packs depth and a very strong bass to some of the more adrenaline-fueled scenes. Dialogue is very clean as well and I was surprised at how often the surrounds kicked in. This one is all about the LFE though, it seemed to really resonate in the battle sequences and give the soundtrack a much needed “oomph” when needed. There really is a noticeable uptick in audio quality when compared with the Blu-ray.

At last count there are four Scorpion King films and Johnson only starred in the first one. But this is the one that started it all and it’s really not as bad as I remembered. Universal’s 4K offering bumps up the video and audio portions, but there are no new supplements (then again we weren’t counting on any). Fans of Johnson’s character or the man himself might want to pick up a copy, but for the casual fan who owns the Blu-ray, there’s no real reason to upgrade. 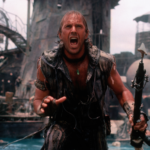 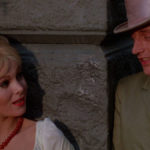