I know that many people look down on this movie as one of the biggest box office disasters and a critical disaster as well. They are about half right. The film actually managed to receive on average about a two star review with some people loving it and some people (like my mother) hating it. I remember that even as a kid I was a little bit let down by the film, but still enraptured in all of the imagery in the movie. The movie may not have been a box office success state side, but it did actually achieve decent numbers over seas and eventually regained all the money that it initially lost. People at the time took to calling it “Fishtar” and “Kevin’s Gate” and relegated the film to the realm of flops and critical disasters. This reputation did not stop me from buying it for about five bucks. When I was a ten year old living in Arkansas, my favorite channel was the Sci-fi channel. I would watch reruns of The Twilight Zone and anime on Saturday mornings and anything else that could hold my ADD at bay. One of the great things about the Sci-fi channel was that they ran extended segments on any upcoming science fiction films, so even though I wasn’t allowed to see most of the actual films I would gaze in wonder at the worlds they were creating. Features on 12 Monkeys, Event Horizon, Dark City, and Waterworld immediately come to mind. That meant that I was extremely excited that at least one of these movies was only PG-13.

The plot of the movie is a bit of a mess. The polar ice caps have completely melted and the world as we know it is completely underwater. People live in tribes that have formed small floating communities on top of the water. Resources are incredibly scarce, especially soil. When we first meet Kevin Costner’s character he is peeing, purifying it, and drinking his own urine. Costner plays the anti hero of the film, an unnamed mariner that likes to go it alone in his decked out sail boat. Costner meets a woman named Helen (Jeanne Tripplehorn) and a child that has prophecy of where to find dry land and a map tattooed on her back. All of this makes sense and I could get on board. There is also an evil leader of rough pirates named Deacon played by Dennis Hopper. Through circumstance Costner must help Helen and the child to avoid Deacon and get to dry land. Oh yeah, Kevin Costner’s character also has developed gills. Yes, gills.

Watching it all these years later, I found myself actually really enjoying Waterworld. Don’t get me wrong. Parts of it are flat out terrible, mainly anything to do with Costner having gills, but parts of it are jaw dropping. The set design and imagination shown throughout the film are mind-blowingly good. The film was made for $175 million dollars, and it really looks like it (aside from the dated special effects in the last thirty minutes of the film.) The stunts in the film are some of the best put to celluloid, sometimes besting scenes from the Mad Max Trilogy. The acting was actually, given the circumstances, great. I am not secretive about the fact that I like Kevin Costner, and Dennis Hopper was more fun than I remembered as the villain. At the end of the day, Waterworld is a stupid idea executed brilliantly. I found myself really enjoying most of the film and laughing out loud at the bad portions of it. To this day, no movie looks or feels like Waterworld. Depending on who you are, that is either a good or a bad thing. For me, I definitely would recommend checking it out and forming your own opinion.

There was a lot of speculation and, of course, head scratching when this disc was announced. After all, Arrow Video had only months before, released their “definitive” version of the film with a new transfer. Check out our review. Universal’s 4K offerings have been a bit hit and miss. Before I get into the meat of this, I will say that I found the Arrow version to look quite good. After viewing the 4K disc, however, there’s a clear difference between the two and fans will certainly gravitate to the 4K (for obvious reasons). Of note, only the theatrical cut is in 4K, the longer 176 minute version is on the Blu-ray.

As we might expect, the 4K version is certainly the better-looking when compared to Arrow’s Blu-ray, and certainly the old Universal Blu-ray. I found grain to be more resolved than the Arrow version, though the overall palette seems a bit darker. That’s OK, though. Colors seem to “pop” a bit more on this version and the HDR certainly does its job. I also found this version to look a bit more natural. Anyone who’s seen the film knows that it tends to have some overcooked colors, but they seem much more “under control” here. Detail is, of course, improved over the Blu-ray. Clearly, pun intended, this is the definitive version when it comes to overall picture quality and the 1.85:1 HEVC 4K image is something that any fan of the film or any film can appreciate.

Again, speculation abounded as if this would contain the DTS HD Master Audio sound mix found on the Blu-ray of if Universal would show this title some love and give it a DTS X mix. Thankfully they went with the latter option and let me tell you – it’s worth it. This might be a reason (or the reason) to finally upgrade your sound system. I found the LFE to really earn their keep, in fact I actually had to adjust the level on my sub which is something I haven’t done before. The atmospheric sound effects really fill the room. It’s amazing. I wasn’t disappointed with the previous DTS HD Master Audio track, but there really is no comparison with this DTS X track. Vocals are superb, lacking any distortion. This movie sounds amazing!

You can’t have it all. This disc is featureless unless you count the 176 minute version of the film as a supplement. I don’t. If you want the definitive version of this film when it comes to supplements, you’ll need to get Arrow’s version. What you get with this one is superior picture and sound.

Waterworld is a polarizing film. Some people can’t get over the stupidity of a man having gills for no real reason. Some people can’t see the hard work and breathtaking art that was created for such a disaster. I am not one of those people. Waterworld may be laughable in numerous areas and have pacing issues (it’s about twenty minutes too long at least,) but I still enjoyed it anyway. If you’re looking for the best technical aspects then this is the version to get. If you’re looking to simply enjoy the movie and supplements are your thing, go for the Arrow version. 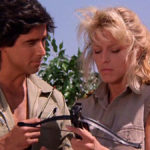 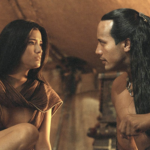