I tend to live my life by one (of many) sayings. For the purpose of this review, I’ll default to one that applies to myself and Hollywood in general. “If it ain’t broke, don’t fix it.” And the filmmakers of 47 Meters Down took that advice. For those that have seen the predecessor, this sequel doesn’t try to change too much. And if there was ever any other reason to not go back into the water, here it is. Don’t ever let someone talk you into exploring ancient ruins underwater. They’ve been there for thousands of years and I’m fine with that. Couple that with sharks and I’ll be at the bar above ground, thank you very much. Jaws set this line of films in motion and it’s likely there’ll never be another movie that will play on our most basic fears like that one, but the 47 Meters Down films do a pretty good job.

For those that saw the first installment, this one takes that premise and ups the ante a bit. In that one two girls traverse underwater to view sharks. They’re in a cage, the winch holding the cage breaks and it’s a struggle to get back to the surface before running out of air and/or getting eaten by sharks. In this film we meet Mia (Sophie Nelisse), a teen living in Mexico with her father (John Corbett) is scouting a sunken Mayan city. Mia, along with her stepsister Sasha (Corinne Foxx) and two friends Alexa (Brianne Tju) and Catherine (Sistine Stallone) convince her to join them in a dive to explore the underwater city. Their plan is to look around and come back up. But that’s spoiled by a giant shark looming. The entryway implodes leaving them trapped and only one way out exists. And once again the goal is to make it back to safety without running out of air or getting eaten by sharks.

47 Meters Down: Uncaged veers from its predecessor, but also stays true to what make that one a success. And that’s fine. If they can make countless Fast & Furious films, then why can’t they do the same thing here? This one follows all the rules of a sequel with some more action sequences, more at stake and more sharks. Yes, it’s not exactly man vs. himself here, there’s a lot more of man vs. nature this time around. We also get a relatively nameless cast with one recognizable name in John Corbett (consider him this film’s Matthew Modine). And if a few of the actresses names look familiar, that’s because their father’s are recognized actors (Jamie Foxx and Sylvester Stallone – neither of which appear in this film). It’s more of the same, but it’s the “same” that is so appealing about these films.

Anyone who’s seen the first film (or any film that takes place underwater) will know what to expect. The 2.39:1 AVC HD image looks, by and large, very clean though there are a few instances in which some silt and grain tend to dominate. Yes, I realize that was the director’s intent and it’s not really a fault of the transfer. But I take things pretty literally and in a section entitled “Video: How’s it look?” I’ll tell you how I think it looks.  The first act has the most color as it takes place on land. Still, we get the neon LCD readouts from the scuba tanks and what not. It looks good, but there are other films that are new to the format that look much better.

The DTS HD Master Audio soundtrack, however, is a different story. There’s something about the immersion in water that gives off a claustrophobic vibe that really makes the film work. Vocals are a bit muffled from time to time (for obvious reasons), but overall I found the surrounds to provide a nice, atmospheric effect. And being a horror film, there are plenty of jump scares that all involve, you guessed it, sharks. It’s a good track.

Though I preferred the original, there’s still something about this film that had me on edge. And it’s like that for everyone. Fear of the unknown is one of our most basic fears and this film plays upon that (and does it well). The film looks good, though a bit murky, at times and sounds great. The lack of supplements makes this one a keeper only for the most die-hard fans, though. 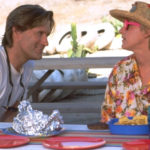 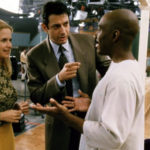