The record for home runs in a single season was once held by Babe Ruth, who once knocked 60 balls out of the park. In 1961, the baseball world watched on as not one, but two men chased that record. The two men were even teammates, as both Mickey Mantle (Thomas Jane) and Roger Maris (Barry Pepper) were within reach of that incredible mark. As the season wore on and both men continued to send balls deep into the stands, a divide of sorts unfolded. The media, the fans, and even those within baseball were torn on which man should be the one to make history. Mantle was a legend, the embodiment of a Yankee and while Maris was skilled and popular, he seemed to be the underdog in the race. As the games wound down and the hunt continued, which man would claim the record and what would be the legacy of 61 in 1961?

I am not a baseball fan, but 61* is not a movie just for fans of the sport. If you do love baseball, then this is by all means a must have, but even for casual folks, 61* delivers. What really stands out is the atmosphere, as the production really sets the tone and makes the era feel real. This adds to much to the experience of course, but the cast also shines in 61*. Barry Pepper is terrific and draws out a lot more emotion than I expected, while Thomas Jane is his usual rock solid self. As good as the leads are, the smaller roles also work well, with a nice selection of skilled actors on hand. This was my first time to see 61* and I didn’t know the cast was so deep, but this is an impressive ensemble.

61* is presented in 1.78:1 widescreen. Not quite a visual masterpiece, but this is head and shoulders above the crowd of high definition releases. The detail sparkles, with the kind of depth that makes you sit up and take notice. As I said, this isn’t a reference level disc, but the detail and depth are terrific. The colors are bright and natural, contrast is dead on, and no errors surface that I could detect. All in all, a dynamic visual effort that fans are sure to appreciate.

The DTS HD 5.1 option isn’t as impressive as the visuals, but it is still a solid hit. The real complaint I have is with the sound design itself, as surround use is not natural at all. This won’t pull you out of the experience per se, but some fine tuning could have added a lot to the presentation. But the dialogue is crisp and clear, the music sounds good, and the crack of the bat is quite sweet, so this is a solid audio presentation.

Billy Crystal’s director’s commentary is passable, but kind of a chore to listen to. He doesn’t seem prepared and stumbles a lot, leading to repeated information. Not the worst session, but not much of a reason even for fans to give this track a spin. In addition to some relevant baseball statistics, this disc also includes a fifty minute behind the scenes piece. This is a solid watch, especially to see the effort that went into making sure the era was brought to life in the movie. Not as in depth as perhaps some would like, but still well worth a look. 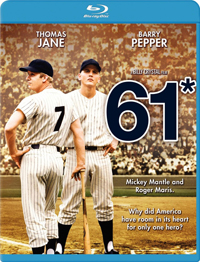