Ripley (Sigourney Weaver) has survived the recent ordeal, and has been picked up by a probe ship. When questioned about the events that led to her hypersleep, Ripley tells the tale of the alien and the destruction it brought with it. Of course, no one believes her, and in fact a mining colony is now located on the same planet as the alien attack. But all is not well in the mining colony, as contact has been lost, and a search and rescue mission is called for. Despite the danger involved, Ripley opts to join the mission, along with a shock troopers, who will lay waste to anything standing in the way of this project. As we know, there are more than miners on the planet, and things don’t look good for the crew as they hone in on their destination. No matter how cocky they are and no matter powerful their weaponry is, the odds rest comfortably against them on this effort. Ripley was able to escape with her life the first time she encountered the alien, but with more than one looming around, can she survive again?

Whenever a movie has some success, discussions turn toward a possible sequel, and that was the case after Alien enjoyed a healthy box office take. Now, few sequels can manage to equal their predicators, with most falling somewhere toward a bottomless pit of obscurity. Following a movie like Alien is no easy task, but Aliens is more than up to snuff as far as keeping the series entertaining. What makes this success even more impressive is the direction of this movie. While Alien functioned as a suspense driven horror movie, Aliens is a flat out action flick, although some feel the popcorn factor is a little too high. I do think this movie compromises the darkness of the original, but it does have a very high level of energy, which makes up for it. With James Cameron behind the camera, you know the action is going to be constant and intense, and here is no exception. The last half of the film just grabs you and shakes the hell out of you, never letting go. While I do not agree with those who tout this as the best of the series, I do think it stands as a fantastic movie, and it serves the series well.

This movie was directed by a man whose name you all will recognize, James Cameron. Cameron is best known the masses for directing Titanic, but before he picked up the Kleenex, he was always holding a gun. Cameron is the directing force behind some of the all time action classics, such as The Terminator, T2: Judgment Day, True Lies, and the underwater epic, The Abyss. While his filmography isn’t extensive, almost every film Cameron touches turns to gold. I hope that his success with Titanic doesn’t pull him away from the genre that made him famous, action. We all know Sigourney Weaver is excellent in all the Alien movies, so I will move onto the supporting cast of this movie, which is one mixed bag of talent. Two Cameron regulars, Michael Beihn and Bill Paxton appear in this movie, with Paxton serving as an annoying, yet unforgettable character. His wails toward the climax are hilarious and are the catch phrases from the series. The rest of the cast is good also, but none give noteworthy performances. The others include Al Matthews (The Fifth Element, Superman III), Jenette Goldstein (Terminator 2, Lethal Weapon 2), Paul Reiser (Diner, Bye Bye Love), and the ever adorable Carrie Henn as Newt.

As any movie-lover knows, James Cameron loves to tinker with his films. He’s done so on just about every one and odds are that the version we’re seeing here is vastly different, visually, than the one in theaters in 1986. That said, a fairly substantial restoration was done for the 2010 Alien Anthology release and that same transfer has been used here (as well as for the 2014 Blu-ray release). No, there’s no 4K version out there (yet) so this will have to do.  There’s a smattering of DNR that is done tastefully, but contrast and black levels remain strong and consistent. The image appears very sharp and crisp. The film also has a more “film like” feel to it than I’d noticed before. Then again the last time I saw this was on the DVD release and that’s been years ago.  So while the movie probably could have looked better, this is by no means a bad-looking picture. Oddly this is one of the few films shot in 1.85:1 so don’t adjust your televisions – that image is meant to fill up most of the screen!

Like the audio, the same DTS HD Master Audio soundtrack is present here. And again, that’s not an entirely bad thing.  I’m sure a next generation format like Dolby Atmos or DTS X could really ramp up the sound stage a bit, but this certainly fits the bill. Vocals are strong and consistently clear throughout, surround sounds are ambient and dynamic and the LFE really get a workout as well. Probably the best example of the sound is in the ending act when Ripley’s machine gun is firing on all cylinders. The sound seems to resonate though every channel and really provides a great viewing experience. It’s a nice mix that has improved on previous versions, though this one is (as previously mentioned) the same as the other Blu-ray’s.

Fox hasn’t totally given us the shaft with this new release, there is one new supplement included on this set, The Inspiration and Design of Aliens. Interestingly, this can also be viewed online. Odd that they would do this as it’s one of the few reasons for people to buy this set over one they could find cheaper somewhere else.

If you own any of the previous Blu-ray versions of this film, you’re left out in the dark here. Yeah, there are some cool tangible supplements, but the same audio and video specs that were on the previous releases are present here. Of course, if you don’t own the Anthology or any of the other versions – this is the one to get. But I guess we’ll have a to wait a few more years for anything definitive. 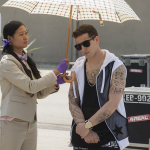 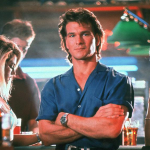