Dalton (Patrick Swayze) is known as a cooler, the man who oversees a team of bouncers and directs them on how to handle various situations. He happens to be one of the best in the business, to the extent that troubled bars often call him in to settle the place down, then he heads off to do the same elsewhere. In this case, he is asked to work his magic and take control over the Double Deuce, a rowdy bar that has become laden with violence, theft, and disregard for duties, that unless something is done, it might have to be closed down. After some negotiations, Dalton agrees and ventures to Jasper, Missouri, where he rents a barn, buys a used car, and prepares to restore order to the Double Deuce. As soon as he arrives, his eyes begin to soak in all the events within the bar, so he is quick to make decisions that will improve the bar’s atmosphere. He cuts loose several bouncers and even catches the bartender skimming funds from the till, as well as other acts of misbehavior within the staff. But his actions soon become a problem for local kingpin Brad Wesley (Ben Gazzara), who plans to make sure Dalton is sent home with his tail between his legs, no matter what it takes to ensure that happens. Dalton isn’t willing to give in however, so a battle between the two rages and in the end, only one side will remain standing…

This is one of those movies that you know isn’t all that great, but damn, if it doesn’t always manage to be a blast to watch. No, Road House isn’t the kind of movie to win awards, garner critical acclaim, or even pull much box office, but it has found a sizable audience on cable television and of course, home video. I couldn’t count how many afternoons I spent watching this one on cable, as it simply entertains and offers a fun ride. Road House fails in terms of traditional dramatic efforts, but it delivers some rowdy, wild barfights, decent romance, and a ton of memorable lines and humorous moments. And since Joel Silver produced this one, it has a solid budget and that enhances the atmosphere and locks in a few decent names. The barfights are tons of fun, with all kinds of bottle-blasts, table-smashes, and hiding under the bar, just the kind of stuff you want from a movie like this, including a great band inside the Double Deuce. Never underestimate the importance of a bar band and with Jeff Healey on tap, complete with chainlink surrounding his stage, you know the tunes are terrific here.

He made a few movies in the 1980s that have remained popular, but one of Patrick Swayze’s final film from that decade is Road House. Of course, he’s better known for a certain movie in which he bumps & grinds with Ferris Bueller’s sister, but I happen to prefer his part here as his best work from the 80s. Swayze seems like the natural choice for the role and in truth, I can’t see anyone else being able to pull it off as well. Others could enhance the dramatic aspects of Road House, but they wouldn’t be as much fun to watch in the tough talkin’ and ass kickin’ sequences. Its great to watch Swayze rumble with the tough guys, as he fits right in with the backwoods types seen here and even has the start of a mullet to prove it. He is able to handle the romantic angle well and he manages to have his butt on screen yet again, but his finest moments comes when he gets to interact with the other bouncers. Other films with Swayze include Ghost, Red Dawn, Donnie Darko, Point Break, Letters From a Killer, and Dirty Dancing. The cast also includes Kelly Lynch (Cocktail, Drugstore Cowboy), Sam Elliot (We Were Soldiers, Tombstone), and Ben Gazzara (The Thomas Crown Affair, The Spanish Prisoner).

This is a movie I’ve seen on pretty much every format out there (though I don’t know if I ever had it or it made it to LaserDisc). Nevertheless, Shout! Factory has done a great job bringing new life to this cult classic. MGM released a Blu-ray of this several years ago and while it looked good, it’s clearly dated when compared to this new edition. A new 2K scan was done and while some of the enhancements weren’t that obvious, they are when compared to its predecessor. The biggest thing, to me, is that the film doesn’t so much contrast. Most every scene with Kelly Lynch seemed like she was sunburned and things just seemed a bit off. That’s been corrected in this edition. There’s a bit more clarity, especially in the scenic shots (admittedly there aren’t too many). Things just seem a bit more balanced and it makes for an overall better viewing experience.

Also improved is the new DTS HD Master Audio mix that’s heads and tails better than the 2009 MGM Blu-ray.  The entire track seems smoother, any distortion or “pops” have been left out in the cold. Vocals seem a bit more pure and rich. Granted this might not be the best movie for dialogue unless you’re a big fan of lines like “Pain don’t hurt.” (and let’s face it, who isn’t?). Channel separation is a bit more detailed as well, I felt that there were some sequences that seemed like they had more action in them. Granted the helicopter scene sounds good, and you’ll feel and hear every punch and kick the movie has to offer. While this will never test the limits of your system, it’s a major upgrade and that’s all we can ask for.

This is where the movie excels. We get a two disc set with a pair of audio commentaries on the first disc and a plethora of new material on the second. Let’s get started.

If you’re around my age, Road House was a staple of your teen years (ok, maybe not all of your teen years, but you get the idea). With Patrick Swayze’s passing, this movie is only heightened in its status as a cult classic. Shout! Factory has done an amazing job with this movie and it’s a testament that when properly motivated, ay studio can dig up material, spend a little money and make an amazing home video release. 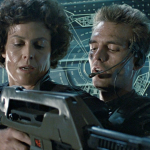 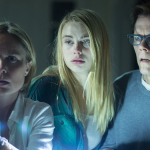