Ever since the early days of film (or radio, for that matter), aliens have been a been a subject of mystery and intrigue. The “We Come in Peace” slogan has been used countless times in film and though it’s now considered somewhat clichÃ©d, we just have a new way of saying it on film. Now can someone tell me why, when aliens invade Earth, why can’t we kick their ass? Why do we always have to get decimated only to find some last minute way of defeating them? Probably because we wouldn’t have a movie, otherwise. Ok, I’m talking to myself here. But seriously, outside of “Starman” or “E.T.: The Extra Terrestrial”, there aren’t a lot of movies in which the aliens really do come in peace and mean us no harm. I guess battle sells more tickets. Still, the latest installment in the “shoot ’em up because they started it” genre is “Battle: Los Angeles.” Let’s see if it follows all the rules.

Grizzled Staff Sergeant Michael Nantz (Aaron Eckhart) has been around for twenty years as a Marine. He’s set to retire, but word of a mysterious meteor shower has the troops on alert. No sooner can you say “Hoo-Rah” than these meteors turn out to be alien spacecraft and they’re landing on every major city on the planet. Nantz and his crew are assigned to head to the Santa Monica police station and rescue any civilians that might be trapped. Add to this a wet behind the ears Lieutenant (Ramon Rodriquez) with no leadership experience and Nantz has got his hands full. As they see the damage done by the aliens, Santa Monica (and soon Los Angeles) is literally destroyed. Their rescue mission turns into a survival mission when they see what their enemies are capable of. Will Nantz and company be able to ward off the aliens, destroy one of the alien’s ships and save Los Angeles? Or is all hope lost?

“Battle: Los Angeles” takes cues from pretty much every other “alien invasion” movie that we’ve seen. There’s segments of “Independence Day”, “Starship Troopers”, “War of the Worlds”, “District 9” and countless others. It’s hard to put a fresh spin in this seemingly overused genre, but darn it if I wasn’t a bit entertained. Aaron Eckhart is one of my favorite actors and even he admits that he had the most fun making this movie (he even broke his arm during the shoot and still never missed a day at work). The ensemble cast does a good enough job and we see character actress Michelle Rodriguez once again in her typecast role as a soldier of sorts. Hey, if the shoe fits…so while this movie won’t go down as being the best “man vs. alien” film ever made, it’s good enough to warrant at least one viewing. There are some decent special effects and if you’ve ever wanted to see Los Angeles burn – now’s your chance.

“Battle: Los Angeles” is shown in a 2.40:1 AVC HD transfer that’s just as good as I expected. This is a new to Blu-ray movie and, as such, we can expect the latest and greatest in regards to how this will look. Flesh tones are bit off the scale, but considering what happens to the characters throughout the film, it’s something I’m going to let slide. Detail is top notch, just look at the five o’clock shadow on Eckhart’s face. Colors are bright and bold with a lot of orangish and brownish hues. The film also has a “Saving Private Ryan” look to it with some of the battle scenes, an effect that quickly wore out its welcome very quickly. All in all, visually speaking, this delivers.

As for the audio, well the DTS HD Master Audio soundtrack certainly delivers on all levels. The title isn’t misleading in the least, there’s plenty of action throughout and we get a vast array of gun shots, grenades, laser cannons and pretty much everything in between. The LFE are certainly engaged during the course of the action and if you’re like me, sometimes you like to let loose and just turn the volume up. This is certainly the movie to do that as the lossless soundtrack positively radiates dynamic sound. Vocals are strong and consistent as well. Surrounds only add to what is a very robust soundtrack.

This two disc set has a fair share of supplements, although they might have sacrificed quality for quantity here. We start out with “Behind the Battle” which focuses on the documentary-style of filmmaking that the movie employs. “Aliens in L.A.” shows the creation of the aliens used in the movie and some of the special effects that were used in the film. “Preparing for Battle” has a few interviews with the cast and the “burdens” of how demanding the shoot was on them physically. “Creating L.A. in LA” shows how the film re-created Los Angeles in Louisiana (get it “L.A.” in “LA”) as they obviously didn’t obliterate the real Santa Monica off the map just for this film. Moving onto the Blu-ray exclusives we find “Command Control”, a picture-in-picture feature with some interviews, behind the scenes footage and some storyboards. These segments can be played individually or seen during the course of the movie. “Directing the Battle” is a conversation with director Jonathan Liebesman and some of his other work. “Boot Camp” shows the military influence that the actors had to go through during the filming. Lastly “The Freeway Battle” gives us a bird’s eye view of the entire sequence from concept to completion. The disc is also MovieIQ enhanced and for PS3 owners, has its own theme that you can use as your background (this is found on several Sony titles). The second disc is a digital copy of the film for your portable device(s). 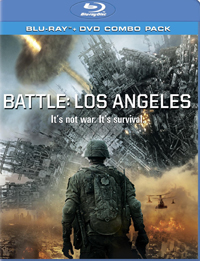