The impact of Viagra has been astonishing. The little blue pill has become part of our culture and taken the world by storm, which equals some impressive profits. In Orgasm Inc., we’re taken behind the scenes of the race to concoct a female sexual dysfunction cure, with billions of dollars in profits on the line. The paths taken are varied, from simple creams to patches to physical implants, but all share the same goal. But unlike Viagra, whose clients have an obvious issue, female dysfunction is much more complex and harder to pinpoint the cause of. So as these various “cures” push forward, some women find themselves concerned about things that never bothered them before. Is the race one intended to help women and improve their lives, or to create and expand a market of clients to ensure high profits?

I wasn’t sure what kind of experience I’d have with Orgasm Inc., given that the top of female sexual dysfunction isn’t one often explored in this fashion. But not only is Orgasm Inc. a well made piece that entertains, it also gives us a rather scary look inside the world of pharmaceutical research. The film looks at what female sexual dysfunction is and whether or not a singular cure is possible, no matter the source. Through interviews with doctors, therapists, sex experts, and beyond, we’re given an in depth take on what is behind such sexual problems and what steps need to be taken. As complex and individual as the sexual issues can be, you will still see those who want to oversimplify the concerns, for the sake of their endorsed cure of choice. While this all sounds kind of dark, the film manages to balance it with humor. Well crafted, insightful, and enjoyable, Orgasm Inc. delivers an experience that well worth seeing for both men and women alike.

Orgasm Inc. is presented in full frame, as intended. This looks good, but it is a documentary, so the visuals aren’t as sharp as polished as major motion pictures. The image is clean and clear throughout however, with no glaring issues to report. We’re able to see all that we need to in effective fashion, which is what counts. I doubt you’ll be entranced by this transfer, but it gets the job done and that’s enough in this case.

A solid, but unremarkable soundtrack is present, which is given the source is all we could ask here. The dialogue is in the spotlight and sounds terrific, with crisp vocals and no errors whatsoever. The other elements might not be powerful, but they sound fine. This movie simply doesn’t require a jackhammer audio style, so this clear and consistent track is just right.

This disc includes some film facts, information on the director, and some bonus scenes. 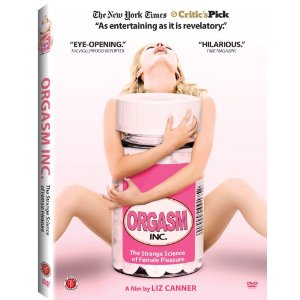